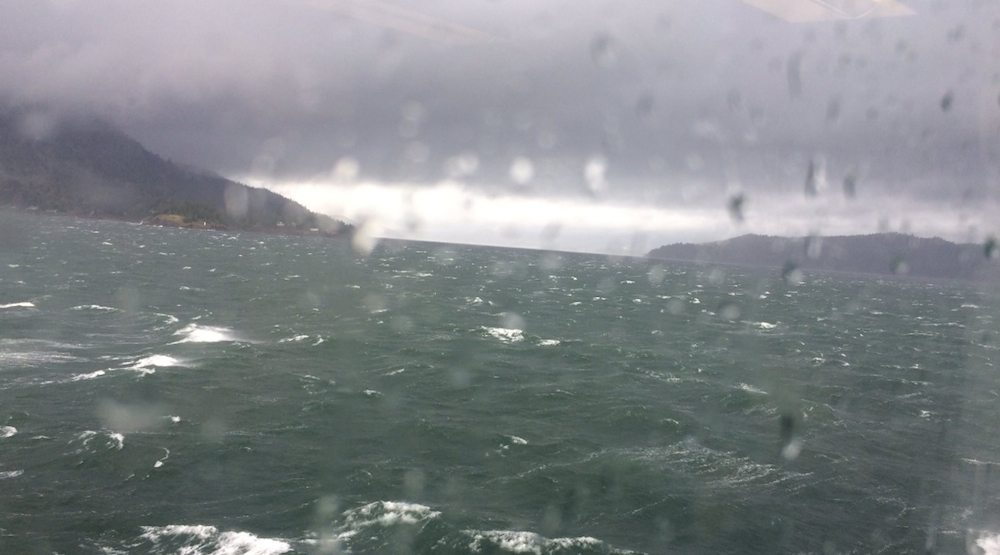 Even BC Ferries’ largest vessels were no match for the stormy seas caused by the storm’s high winds, which wreaked havoc on the ferry company’s schedules throughout the afternoon.

Four sailings running from Horseshoe Bay to Nanaimo and Comox to Powell River were canceled, and five sailings were delayed significantly including a 120-minute delay of the Spirit of Vancouver Island’s and 105-minute delay of the Coastal Celebration on the Tsawwassen to Swartz Bay route.

The winds were so severe that the 524-foot-long Coastal Celebration had to seek shelter in Active Pass, remaining idle between Galiano Island and Mayne Island for several hours, until it was safe to cross the Strait of Georgia.

Delays at the Tsawwassen terminal began at approximately 1 pm when winds became sustained at over 70 km/hr. At the mouth of Howe Sound, gusts reached a speed of up to 90 km/hr.

Ferry services began returning to normal at approximately 4 pm as the storm had moved further inland. Winds ahead of the storm system were strongest.

Dozens of flights scheduled to depart Vancouver International Airport (YVR) have also been delayed due to the use of the crosswind runway.

Local flights between Vancouver and Victoria operated by Harbour Air using seaplanes were canceled throughout the day due to the wind.

TransLink’s SeaBus ferry service from North Vancouver to downtown Vancouver was not affected and operated normally.

The conditions are expected to worsen tomorrow night with the arrival of a typhoon remnant-enhanced windstorm.

Strong winds at the #tsawwassen #bcferry. Finally docking in the mainland

Due to high winds, the ferry I’m on is not allowed to dock. We’ve been floating around out here for an hour (I can see the tsawwassen terminal!) and no word on when we’ll be able to come in (30 minutes to an hour was the last update)… piss. While I don’t usually get sea sick today seems like an exception😷⛵️

A few houra of floating around waiting for wind to die down. Great driving skipper. #bcferries #typhoon

A spot of weather on the crossing today #bcferries #travel #bc

@BCFerries as we head to HSB for BC Lions game pic.twitter.com/nOM9ZBKNIM

Quite a line at the @BCFerries Tsawassen terminal. I hope I can get home to @CityOfVictoria today!

It’s a nice day for ducks not ferries pic.twitter.com/jR5PswO2pH

At least I think the ducks (cormorants, murres, seagulls) like the weather @BCFerries Tsawassen terminal! pic.twitter.com/z8WZSbbRz0