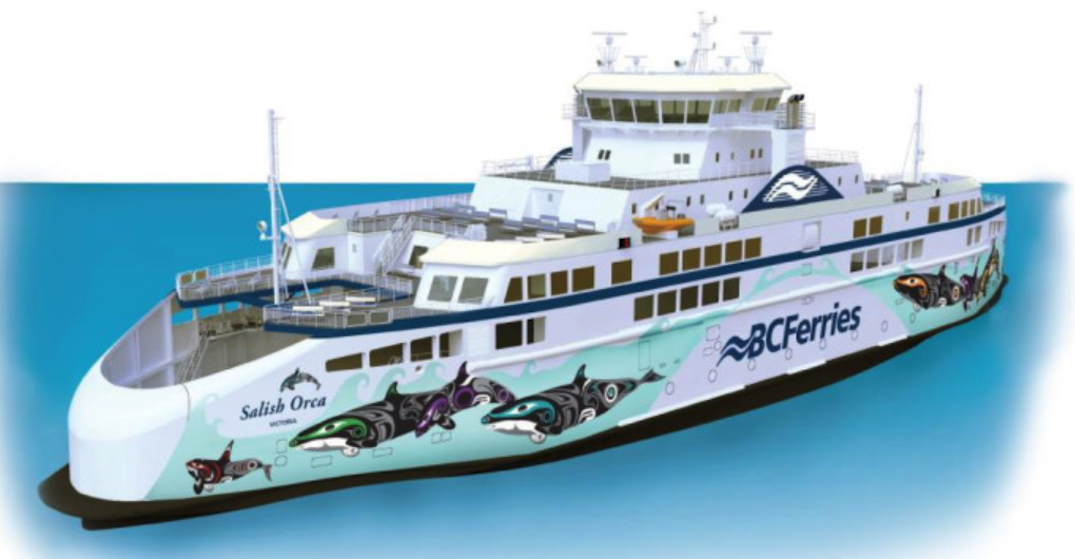 Artistic rendering of the 2016-built Salish Orca. (BC Ferries)

BC Ferries has announced another order for a new vessel, adding to the 2016-built Salish Class fleet.

The ferry corporation has awarded Remontowa Shipbuilding S.A. of Poland to build an additional LNG-fuelled vessel that will be identical to the original three Salish Class vessels — Salish Eagle, Salish Orca, and Salish Raven — constructed by the same shipyard.

The new 107-metre-long vessel will be used to serve the Southern Gulf Islands in 2022, and allow for the retirement of the 1965-built Mayne Queen. It will have a capacity to carry at least 138 vehicles and up to 600 passengers and crew.

Onboard passenger amenities include a cafe, retail store, children’s play area, and a passenger lounge.

The LNG fuel used by the Salish Class vessels are considerably cleaner than the existing vessel’s diesel fuels, reducing greenhouse gas emissions by 15% to 25%, reducing sulphur oxides by 85%, and reducing nitrogen oxides by over 50%.

“Our Clean Futures Plan is our path to replace diesel fuels with cleaner energy options. While this cannot be achieved in a single step, we are continually seeking energy sources that offer a cleaner, lower carbon-intensity option to displace non-renewable diesel,” said Jamie Marshall, BC Ferries’ vice president of business development and innovation, in a statement.

“In our move towards a sustainable future, adopting LNG is one way to reduce our impact on the environment today. This new vessel will be our sixth ship fuelled by natural gas.”

The ferry corporation received 16 bids from international shipyards and shortlisted three shipyards to proceed to the detailed bidding stage. No shipyards in Canada submitted a bid.

Just last fall, BC Ferries announced an order of four electric-battery vessels serving minor routes at a cost of $200 million.

As well, a significant upcoming procurement will replace all five major C-class vessels serving the major routes between Metro Vancouver and Vancouver Island.