It’s the holiday season, and while most will be popping that bottle of champagne or pouring that expensive Merlot when they sit down for dinner, we have a few creative beer pairings that will surprise even the most rigid sommelier.

Beer isn’t typically the first beverage you’d think of to pair with your holiday meals, but with the wide range of flavour profiles and textures, beer pairs surprisingly well with a number of different food options.

The important thing to remember when pairing beer with food is you either want the beer to compliment your food pairing, or contrast the flavour. Also, give you guests the opportunity to taste the food first, before they sip the beer–sip being the optimal word here. If you’re pairing a multi-course meal with six  (or more) beers, some with very high alcohol content, you’ll want to serve small portions and make sure people get home safe.

So with that said, here are seven (mostly B.C.) craft beers to pair with each of your holiday courses, from appetizer to dessert, and the after dinner hours.

Starting off the evening, it’s a good idea to cleanse the palate and drink something that has a softer taste and a hint of sour to it. Goose Island’s Sofie is a great option as it spends time aging in white wine barrels giving it a soft pepper with a hint of citrus tartness. Plus it will practically look to your guests that you’re serving them wine, a great way to start them off easy.

Let’s assume that your appetizers include a lot of cheese, because everyone loves cheese. In that case, pairing an IPA with a strong cheddar or a stinky blue is an excellent choice. The hops profile will help balance out the strength of those cheeses and in some cases will pair better than any wine possibly could. My suggestion is the Touques of Hazzard from Parallel 49; it’s am Imperial White IPA with a hint of gooseberry and tropical fruit. Just make sure to pair it with strong cheeses, otherwise it overpowers softer ones.

Central City‘s Mayor Kolsch is a traditional German ale with a crisp, refreshing, flavour that offers a smooth dry finish, with a mild bitterness. A nice compliment to a soup that is heavy or creamy.

Four Winds makes a Saison that has subtle notes of flower and spice, a nice addition to a salad dressing that has a bit of bite to it like a vinaigrette. 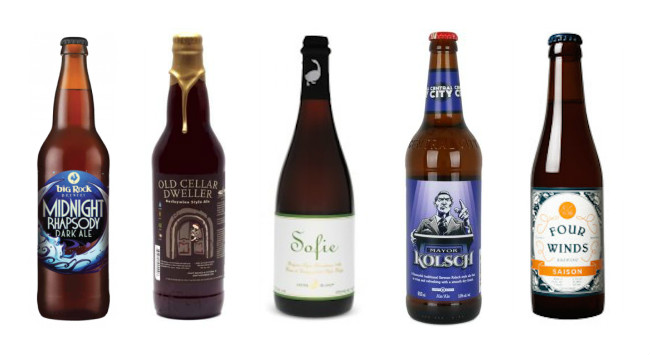 5 of the 7 suggested brews for your holiday meal

For the second year in a row, Dageraad has released a limited edition Belgian strong golden ale, and this will pair fantastically with turkey or chicken. Featuring Indian coriander and pears harvested in Keremeos, this is an excellent companion for your entrée. Just be sure to grab a few extra to cellar.

Dessert is the best course of the whole meal, and there’s nothing better than to pair your chocolate or fruit dish with than a nice dark ale. Big Rock’s Midnight Rhapsody has hints of dark fruit and raspberry jam which will compliment dessert nicely without overpowering it.

Like a good Port or Sherry, Barley Wine works exceptionally well as a digestive for after that hefty meal. At over 11% alcohol, this is meant to be served in small portions, and if you still feel like eating, Driftwood’s Old Cellar Dweller pairs incredibly well with some washed rind cheese or dried fruit and nuts.