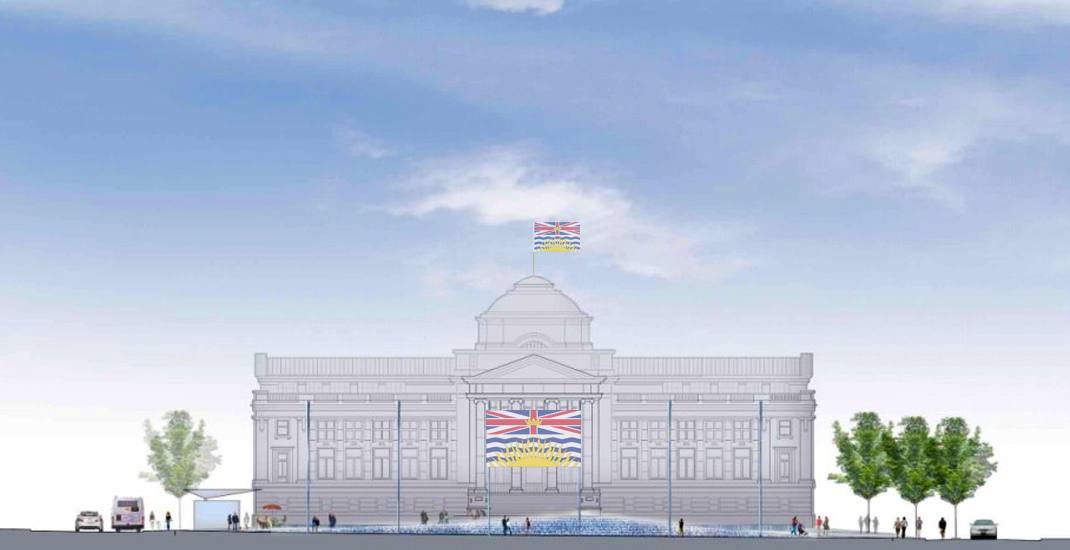 Artistic rendering of the Vancouver Art Gallery as the new BC legislature. (handout)

Vancouver will become the centre of both business and politics of British Columbia under a new scheme of historic proportions proposed by the BC NDP provincial government.

Under the new audacious plan called ‘BC’s Prosperity Leap’, the capital of the province and all of the associated functions, departments, and offices of the provincial government will be relocated from Victoria to Vancouver.

This means nearly all 14,000 bureaucrats that currently work on the southernmost tip of Vancouver Island will be working and living across the Strait of Georgia in Vancouver instead.

The full transition to the Lower Mainland could happen by 2027, with the old Vancouver Art Gallery building in downtown Vancouver converted and expanded into the new BC legislature.

Artistic rendering of the Vancouver Art Gallery redesigned as the new BC legislature. (handout)

And to provide new working space for its bureaucrats, the provincial government is already in the process of seeking between 1.5 and 2.1 million sq. ft. of office space within or near downtown Vancouver.

“This will be the dawn of a new era in the history of British Columbia,” Premier John Horgan said in a statement. “We are returning the capital to its rightful location in Metro Vancouver, and in the process of this Prosperity Leap we will be providing government with a new setting and location that allows it to be fully efficient and in synch with the business and financial core of our province.”

“We understand this is a major change to BC’s largest communities, particularly Victoria and Vancouver, and in some cases it will be a difficult decision to appreciate. But this is a move that we must make for our collective good and to ensure we are connected, not isolated, from the beating heart of our province and the majority of our residents across the mainland.”

New BC legislature at Vancouver Art Gallery and Robson Square

The old courthouse building, the current home of the Vancouver Art Gallery, and UBC Robson Square will undergo a complete conversion, expansion, and seismic upgrade at a cost of $515 million for its new purpose as the new BC legislature building.

The North Plaza, which was recently rebuilt, will be excavated to create a vast underground space for a new Legislative Chamber with public and press galleries high above the chamber floor. A large adjacent underground space will be used as the new legislative library. 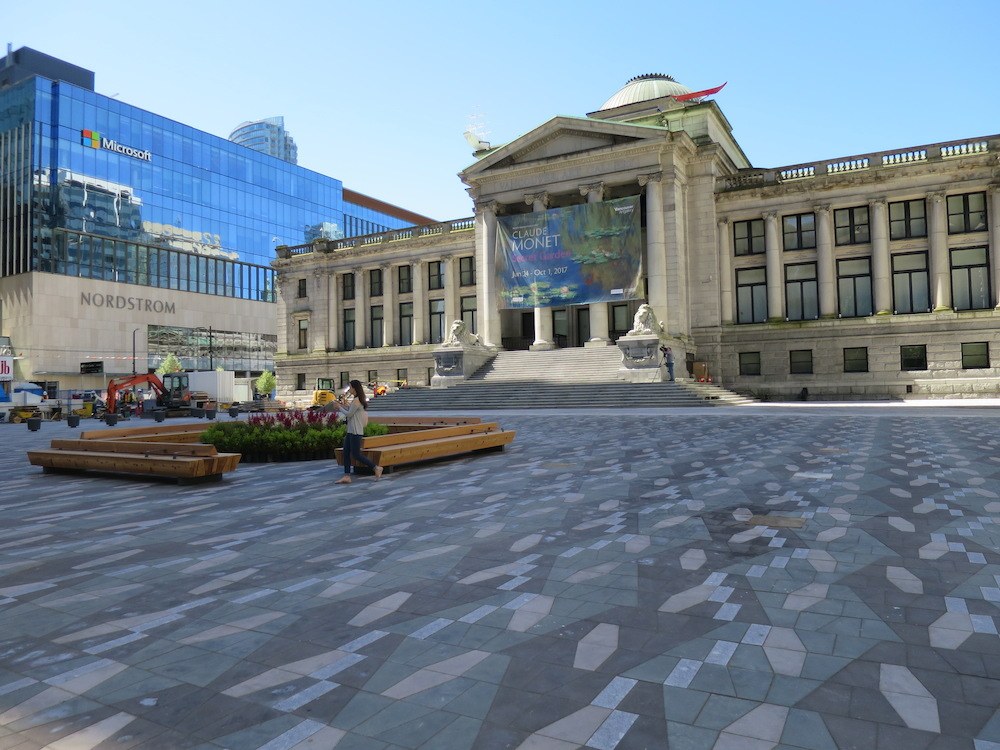 Private offices and meeting spaces will take over the old courthouse building complex the Art Gallery is currently located in.

UBC will be forced to vacate its 80,000-square-foot, two-level underground campus space at Robson Square, which will become expanded integrated office and meeting space for the legislature.

This is significantly larger than the 176,300-square-feet of space within the existing BC legislature in Victoria.

As part of the project, the North Plaza will undergo another redesign that fulfills its new role as a place for official government celebrations, such as head of state visits.

A large $60-million glass roof with a steel and wood structure will also be built above Robson Square to provide the plaza with a covering for events and festivals while also creating a new visual landmark in the city.

The 50-foot-tall arching canopy was originally envisioned by the provincial government in 2008 – just in time for the 2010 Olympics. 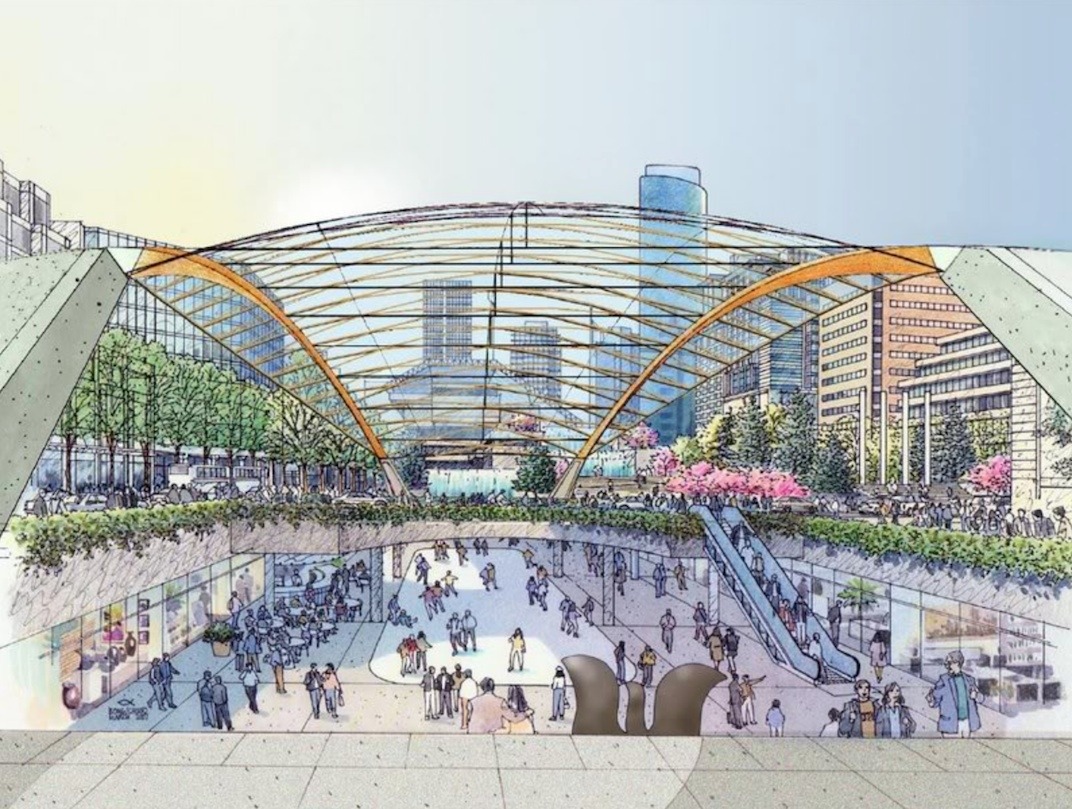 Robson Square’s giant “clamshell” roof, as originally envisioned in 2008, will be part of the major project to convert Robson Square and the Vancouver Art Gallery into the new BC Legislature. (Government of BC) 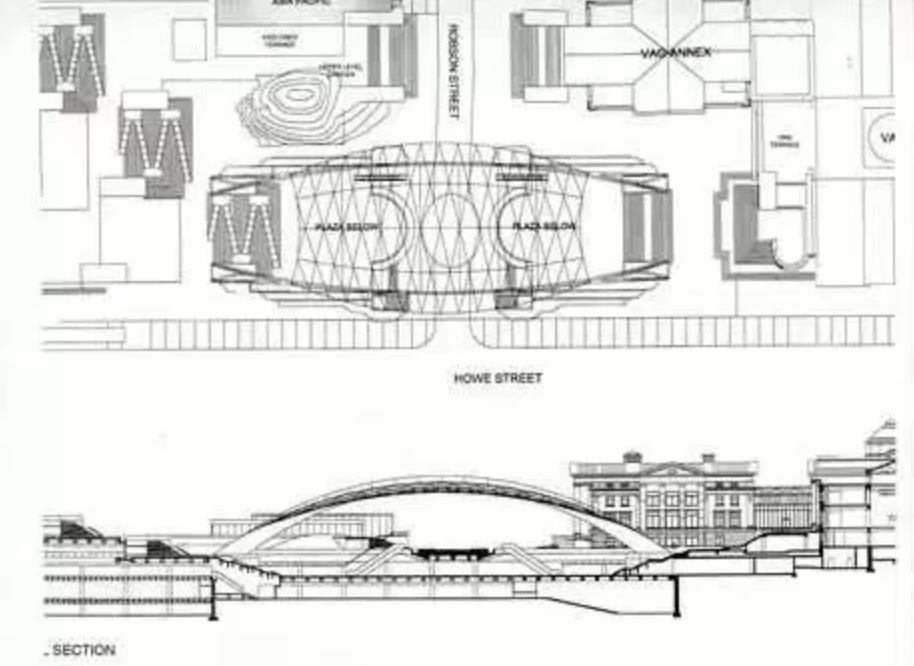 Robson Square’s giant “clamshell” roof, as originally envisioned in 2008, will be part of the major project to convert Robson Square and the Vancouver Art Gallery into the new BC Legislature. (Government of BC)

Both the 1897-built legislature in Victoria and the 1906-built Vancouver Art Gallery were originally designed by British architect Francis Rattenbury, and the conversion of the Vancouver Art Gallery takes inspiration from the late Bing Thom who envisioned a concert hall complex for the site. 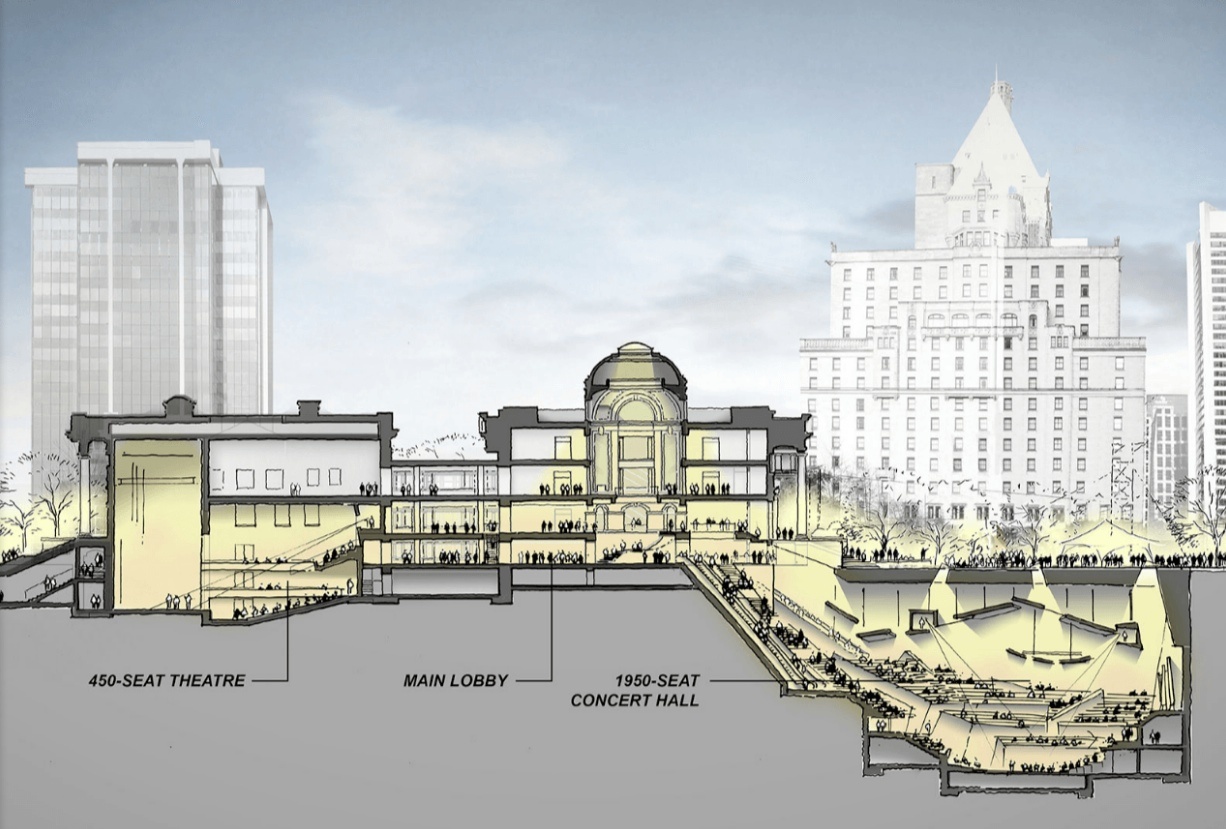 Artistic rendering by Bing Thom in 2011 to convert the Vancouver Art Gallery into a concert hall venue. It envisioned using new underground space at the North Plaza for the main concert hall. (Bing Thom) 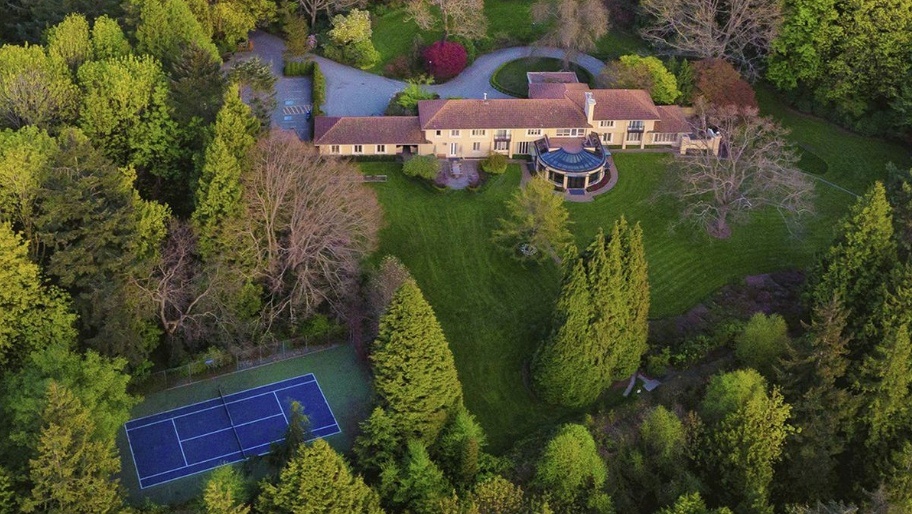 The total cost of moving the functions of the provincial capital to Vancouver is pegged at approximately $1.5 billion.

The influx of bureaucrats and government officials in Vancouver could add to the vibrance of downtown Vancouver, with restaurants, hotels, retail, and other service-based businesses standing to benefit from the increased activity of government business. Tourism also stands to benefit.

However, there is a wider economic benefit to the relocation. Issues and priorities that are specifically pertinent to Metro Vancouver residents and local governments could gain more attention with the capital relocated to the region, in the same way that the Ontario legislature – located in downtown Toronto – has strengthened Toronto’s position not only in the province but in the country.

And with the political centre relocated to Vancouver, there will be more lobbyists in the city, as they previously congregated in Victoria. 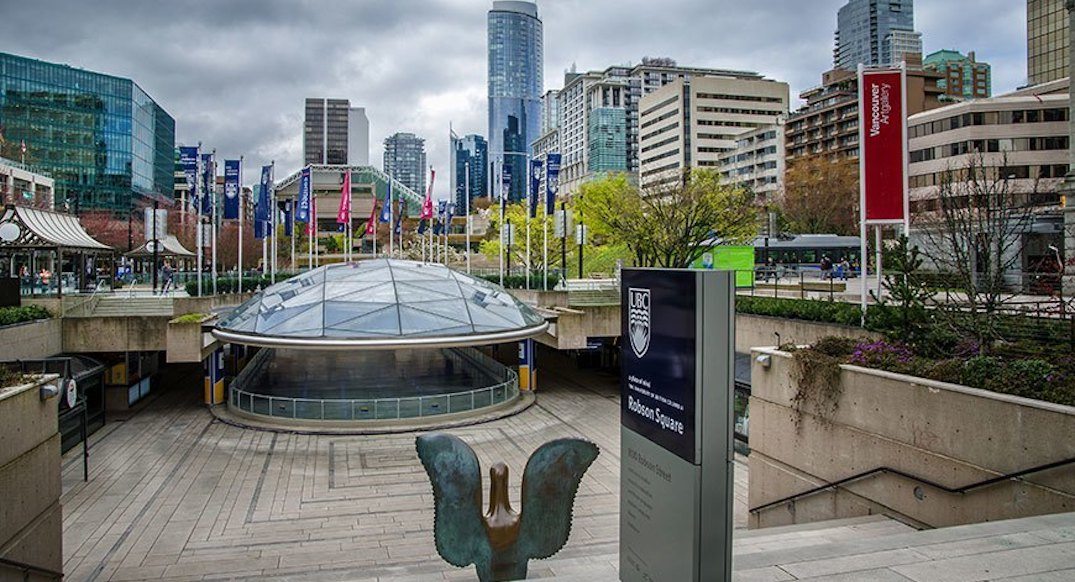 Government operations would become measurably more efficient with MLAs no longer having to make the trek to Victoria. MLAs from the interior and northern regions, in particular, currently deal with the hassle of arriving at Vancouver International Airport before making a short transfer to Victoria.

In short, with the capital relocated to Vancouver, Metro Vancouver will have far more influence over the decisions of the province. It could provide the BC NDP with far more popularity from the region, although it is unclear if there will be an overall net gain in popularity once the party accounts for its losses from Vancouver Island.

But not everyone in Metro Vancouver’s business sector will be happy if the plan receives approval. Transportation businesses – float planes, helicopters, and other small short-haul aircraft – that frequently shuttle government officials between the Island and the Lower Mainland could suffer greatly.

And while it will be a boon to the real estate and construction industry, such a huge employment shift in the province’s government sector will likely add even more pressure to Metro Vancouver’s already hot housing market. 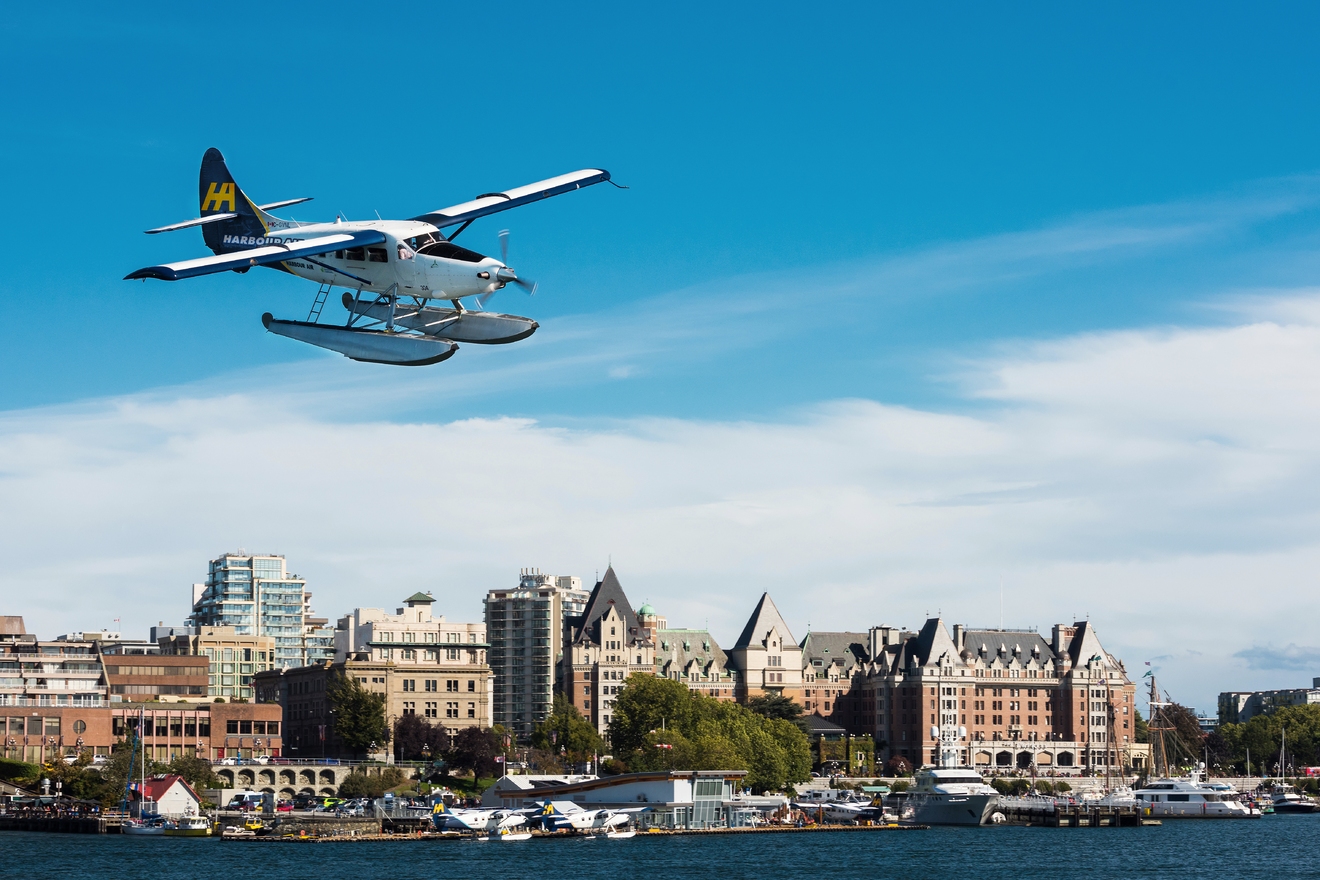 The future of Victoria

Unsurprisingly, news of the big move sparked wide condemnation on Vancouver Island, especially in Victoria which has an economy that largely revolves around the provincial government’s activities, which is also a major driver for tourism.

“I absolutely have no words,” said Victoria Mayor Lisa Helps. “This is an absolute shock, I don’t think anyone saw this coming.”

Helps has ordered an emergency City Council meeting for Monday afternoon, and the City will provide an official response later in the day after the meeting has concluded.

The BC Legislature in Victoria. (Shutterstock)

The backlash also saw BC Green Party leader Andrew Weaver threatening to break the Green-NDP alliance and potentially send the province into a sudden election.

“I’m really struggling with comprehending this decision, which was not mentioned in any of our joint negotiations on policy with the party. Obviously this plan has been many months in the making, and it was done without consulting our party,” said Weaver, who is also the MLA for the Oak Bay-Gordon Head riding in Greater Victoria.

“I will be meeting with the Premier later today to understand how all of this came to be. If the NDP does not back down on this, then the responsible thing will be to bring this government down.”

No plans have been outlined on what will happen to the existing legislature and Government House, but a 2011 study found that the legislature is in need of a $250-million upgrade to prevent its collapse during a minor-to-moderate earthquake.

Dome of the BC Legislature. (Shutterstock)

It is worth noting that Victoria was not the first choice for the location of the capital, as New Westminster was the capital of the original colony of British Columbia between 1858 and 1866.

However, the capital was later relocated to Victoria in 1866 – due in part to the lobbying efforts by Victoria’s business elite – when Vancouver Island joined BC.

At the time, Victoria’s economic growth was far outpacing any other city in the colonies of Vancouver Island and BC. Victoria had a much stronger British presence and had free port status, which suppressed New Westminster’s growth.

And Vancouver did not attain its position as the centre for business in BC until later in the century, after the Canadian Pacific Railway’s completion of the transcontinental railway.