BC’s Shea Weber has opted to sign a massive offer sheet with the Philadelphia Flyers worth over 100 million over the course of 14 years. 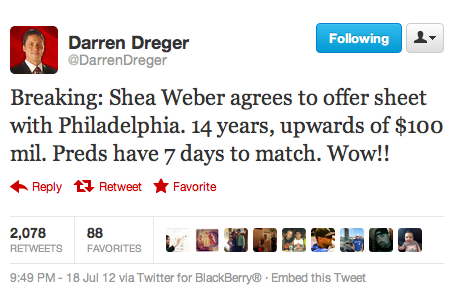 Depending on how the contract is structured, Weber’s cap hit could be anywhere from six million to eight million. If Nashville opts to not match the offer sheet, they’ll receive a plethora of draft picks. A full breakdown of what they could receive can be seen below:

More from Dreger; he reports that Nashville was trying to trade Weber before the Flyers eventually grew tired and decided to put forth an offer sheet.

With this big news, you can say goodbye to your Shea Weber in Vancouver dreams. It surely would’ve made for a fantastic line-up. but there is absolutely no way that the Canucks would offer the Sicamous, BC native that kind of money.