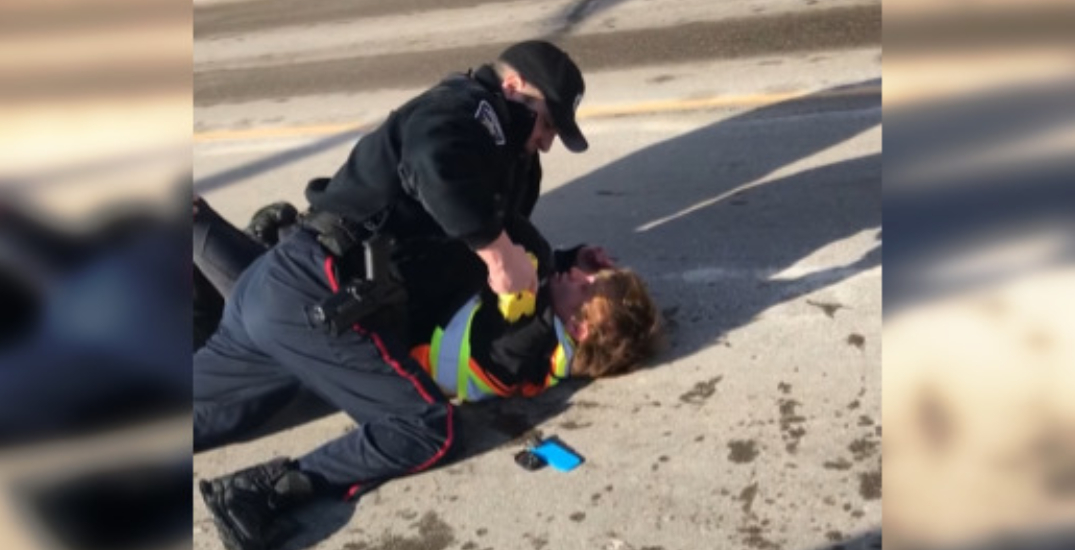 Police in Barrie, Ontario, said they are looking into videos circulating on social media that show a violent arrest in the city’s downtown.

The clips, which were posted on Facebook on February 4, capture an officer pinning a man to the ground on Dunlop Street, holding what appears to be a taser to his neck.

“Do you want this?” the officer asks. “Put your hands behind your back, or I’m lighting you up.”

The man appears to say he can’t due to the way he is being held down.

The officer then tells him to roll onto his stomach, before hitting him in the head with the taser.

Warning: The video below may be disturbing to some readers:

The Barrie Police Service is aware of a video that has been posted on social media and is currently looking into the circumstances that resulted in the arrest this afternoon on Dunlop Street in downtown Barrie. We will provide further comment once the details are confirmed. pic.twitter.com/vLYXfqdyO3

As the man, who said he is 20-years-old, yells for help, bystanders call the officer’s actions “excessive force.”

A second officer appears, and the two roll the man onto his stomach before placing him into a police cruiser.

“Get back. Get back, or you’re going in,” one officer yells at the onlookers.

According to Facebook user Zaria Valyear, who shared the videos, police allegedly stopped the man for going through a red light on his skateboard.

“I won’t be ignoring this, and once we have all the details, there will be full accountability,” Lehman tweeted following the incident.

I’ve seen the videos of the violent arrest on Dunlop Street. This will be fully investigated. I won’t be ignoring this, and once we have all the details, there will be full accountability.