Vancouver residents rallied at Ambleside Park in West Vancouver to show their support against the dog slaughter in Whistler last year where 100 dogs were killed.

“This is about the dogs and the people and the passion, when you give the passion somewhere to go, it doesn’t get quite as angry and as frustrated and maybe the message comes out more clearly” says Catherine Barr a local Vancouver columnist and blogger who organized the “doggy Tweetup” the first ever of it’s kind.

Many hiding under umbrellas or fighting to keep circulation in their hands while they Tweeted or took pictures, the weather didn’t stop the rally or Catherine, who said “Well the weather worked against us by all means, but the turnout online is massive and the message is still huge and it’s still a positive one.”

Regardless if they had four feet or just two, hundreds of Vancouverites from all over the lower mainland came to show their support and many finding a place to vent frustration over the tragedy in Whistler just following the Olympics. The Twitterverse exploded with outrage after hearing about the horrific details and many who came out weren’t afraid to share their opinions. 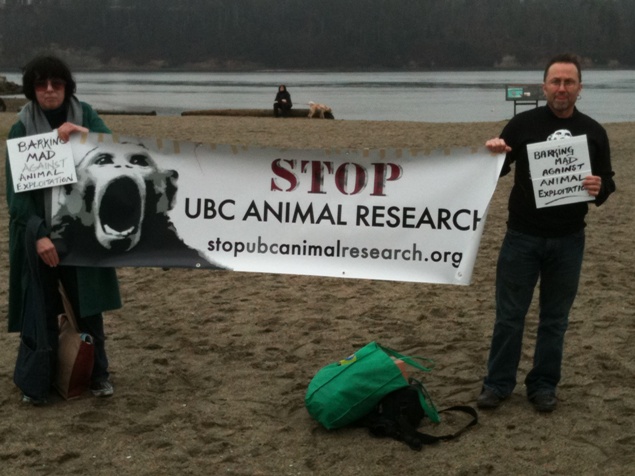 “I hope this evil monster gets punished for the crimes that he’s committed” said Sonia, a rally supporter who because of the doggy Tweetup has now joined Twitter. Adding her support along with the thousands already Tweeting using the hash tag #BarkingMad which was trending in Vancouver on Sunday.

“All this, Facebook & Twitter is making a statement, we’re being heard and that’s what we want. We don’t want the violence, this monster already created violence so we don’t want that with our rally” Sonia explained.

The rally brought out all kinds of different animal lovers, some holding signs condemning the SPCA, some using Gandi quotes, some wearing doggy face paint to portray their feelings and opinions while most of their 4 legged friends were just out to enjoy some time with colleagues.

When asked what she hopes the first ever doggy Tweetup accomplishes Organizer Catherine Barr says “I hope at the end it accomplishes that people can push for change, to prevent animal cruelty and that everyone has a twitter account so the next one will be even bigger.”