Gastown’s Bao Down kicked into gear in 2015, and their cheeky Asian fusion menu of steamed bao (buns) sandwiches and casual fare has enjoyed a steady popularity. Now the crew has expanded their unique brand of restaurant fun into Vancouver’s Olympic Village, with their just-launched Bao Down Gastropub + Raw Bar.

Occupying a ground floor space at the Executive Group Development in the growing neighbourhood, Bao Down Gastropub has arrived in what was meant to be the Vancouver debut of acclaimed Toronto Thai chef Nuit. Bao Down partner Matt Adolfo, who had been attached to the project, opted instead to take advantage of the terrific locale to bring not only authentic and exciting Thai eats to the city, but a broad menu of bold Pan-Asian fare with an emphasis on fun.

Along with chef/partner Greg Edwards, Adolfo and the Bao Down team have built out a vibrant 67-seat restaurant that will offer lunch, dinner, and weekend brunch in an inviting and eclectic space. With reclaimed barn wood panelled walls, and spacious tree slab tables (finished and built by the Bao guys themselves), the room is a study in Pacific Northwest gastropub chic and the contrast of Bao Down’s unmistakable influences: Hip hop, street art, and 80s flicks.

A mural by local artist Taka Sudo shakes up the room with its bold strokes of neon and hashtagged very Vancouver buzzwords (hey, hey, #vancity!), the menu cover nods to 90s hip hop legends, and the back hallway is lined with framed posters from iconic 80s movies.

The dishes showcases Edwards and his culinary team’s interest in well-known Asian foods, but really taking things to the next level when it comes to fusion and fun. Kick off a meal with Sprung Rolls, which bring Vietnam and China together through prawns, crispy pork, black garlic, and salted egg custard. The Green Papaya Salad gets a textural twist with tempura fried beans, and the Singapore Slaw will have a tastebud shakeup with its Miso-Sesame & Umeboshi Vinaigrette. 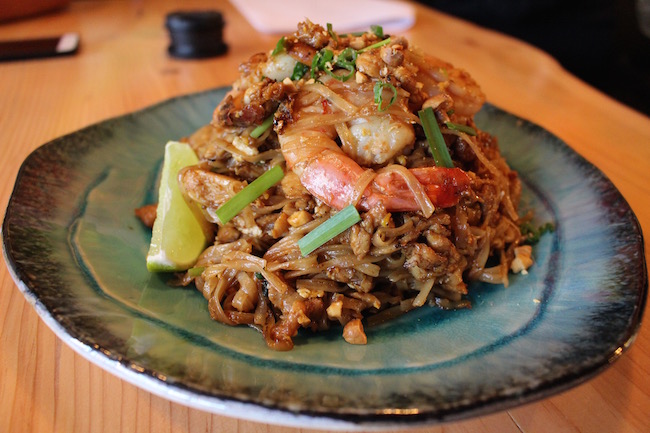 In addition to a spot-on Pad Thai and a selection of curries, the Gastropub is going big with their soups. Their Lobster Feu riffs on pho, and uses Atlantic lobster, rice noodles, butter infused broth, and house made XXXO sauce (the Bao Down’s wink-wink take on a traditional XO sauce). Pineapple Rice is rocked with curry leaf and kimchi (it’s called Tropic Thunder), and their beloved fried chicken bao gets the spotlight as a full-on fried chicken entree.

In the spirit of the restaurant–which is really about coming together and enjoying good food and having fun–the Singapore Slaw is built to share, and goes the “audience participation” route, where guests need to get in on the action and mix up the mound of ingredients when they come to the table, presented on a slab.

Two further exciting features on the menu are the charcoal grill (fuelled by imported Thai charcoal), and the raw bar, which will feature $1.50-a-shuck oysters, prawns, and poke–the latter capitalizing on a trend we can expect to see waft up from south of our border in the coming months and years. “We’re going crazy with the oysters,” laughs Edwards, who is excited to get customers excited about some of his favourite east coast oysters, along with the best of the west. 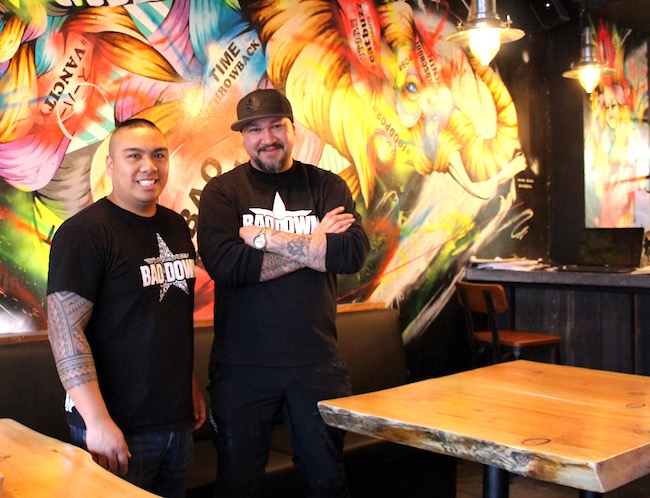 Come the weekend, the party doesn’t stop with their plans for a Hawaiian-style brunch service (think macadamia pancakes and so on). All their menus include plentiful vegetarian and vegan options. Everything is being served up on eye-catching plates Adolfo and Edwards collected on various excursions while building the concept (and the restaurant). From the bar, bubbles, red, and white wine on tap, local craft beers, bottled Asian import beers, and a forthcoming cocktail menu showcasing Asian-fusion creations.

Edwards says diners will find the restaurant doing more of a “Gastown-style” Bao Down menu with bao and curries, and more of a sit-down experience in the evening, when the raw bar opens up for service and the full menu is available.

Bao Down Gastropub + Raw Bar is opening Friday, January 8 for dinner service, and will expand into lunch and weekend brunch service the following week. Keep an eye on their Instagram page for updates.

Take a peek inside the new restaurant: 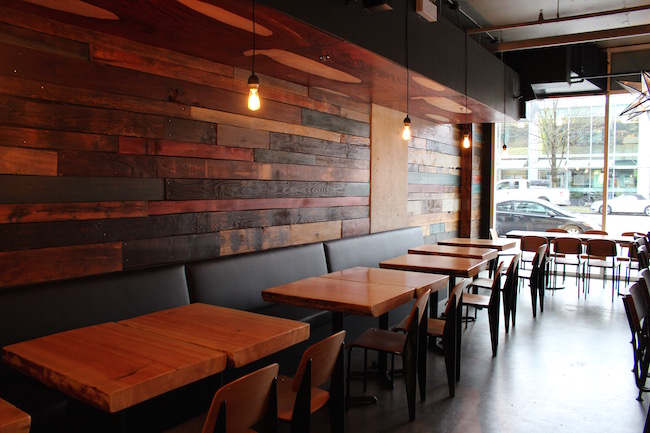 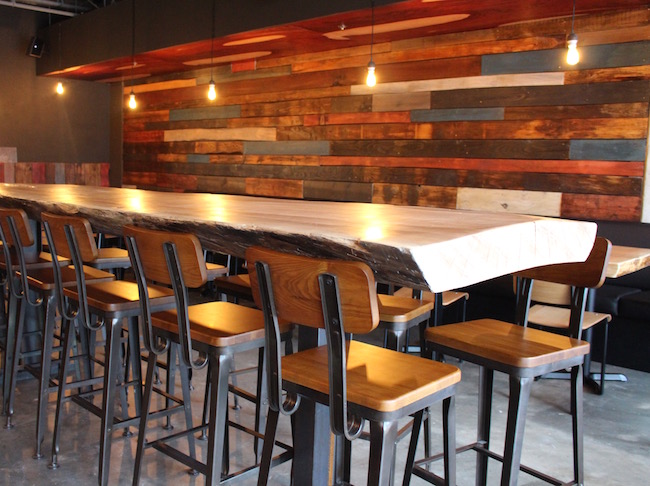 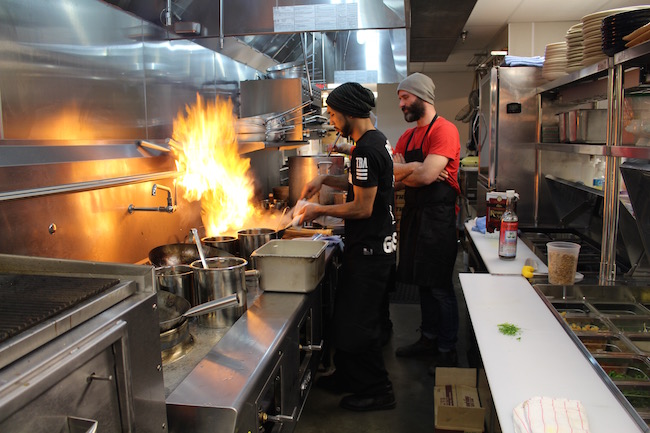 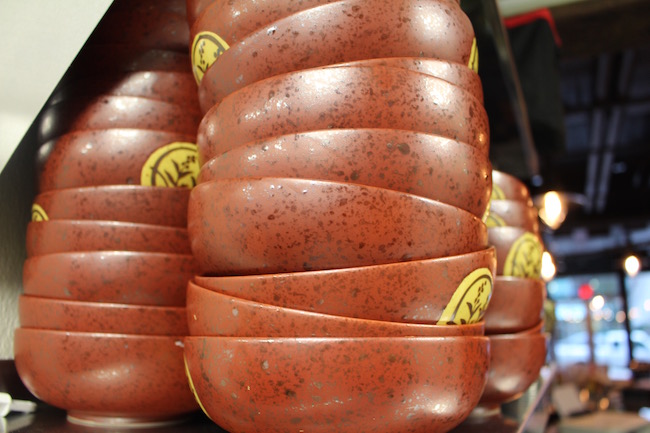 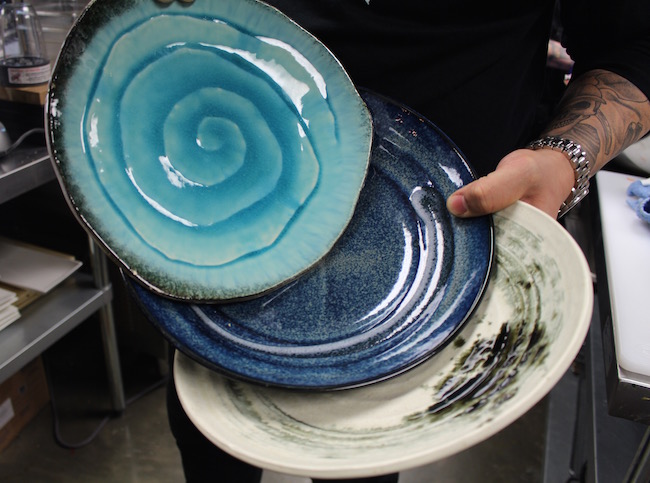 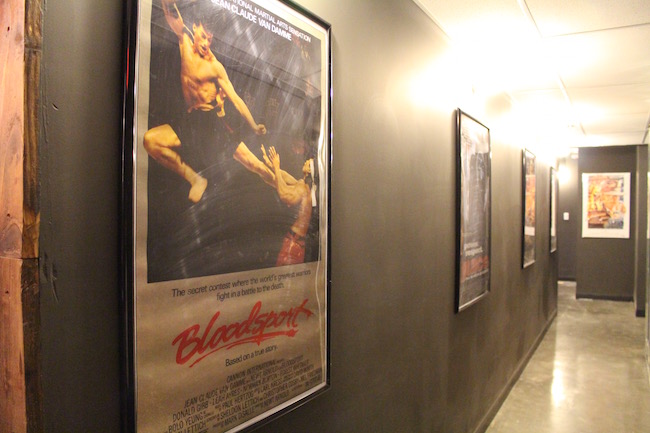