Ever wondered what mid 90’s sports advertising looked like? If you didn’t automatically think “Players dressed up as construction workers” then boy do I have a treat for you. Part two of our look back on the super weird Canucks photo series starts now!

In case you missed part one, you can check it out HERE. 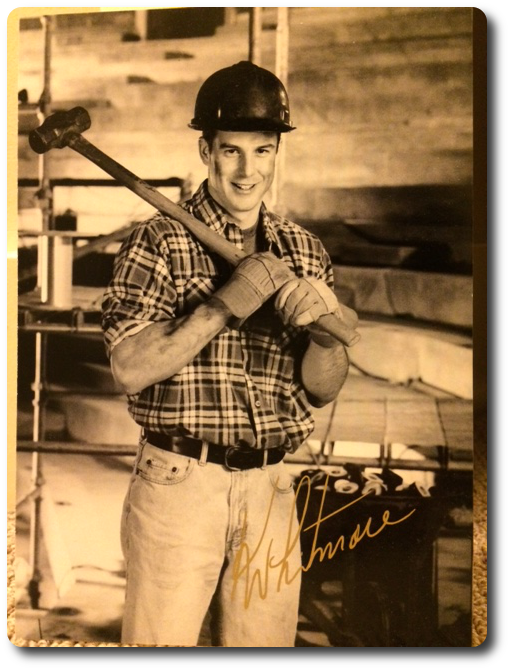 Ah, Kay Whitmore. He only had three seasons with the Canucks, but he always played his heart out. Look at that picture! You can tell, he has no idea what he’s supposed to be doing, but dangit, he’s going to give it his all. You want him to hit something with a sledgehammer? He’ll do it!

My favorite memories of Kay Whitmore usually involved fights (he once got 50 PIMS in a season in the AHL!).

For instance, look at this beauty of a fight:

Not only is it awesome to watch Kay punch a downed Ciccarelli,  but it’s amusing to watch Lidstrom, Coffey, and Lumme cling to each other in an attempt to stay away from the fights: 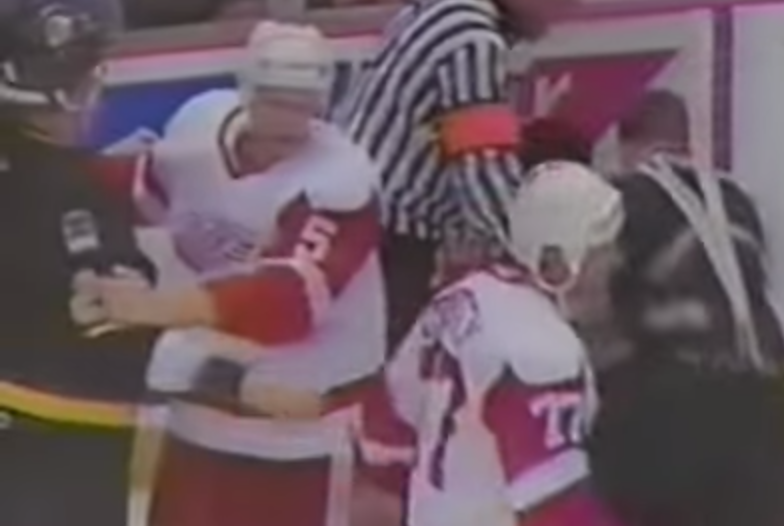 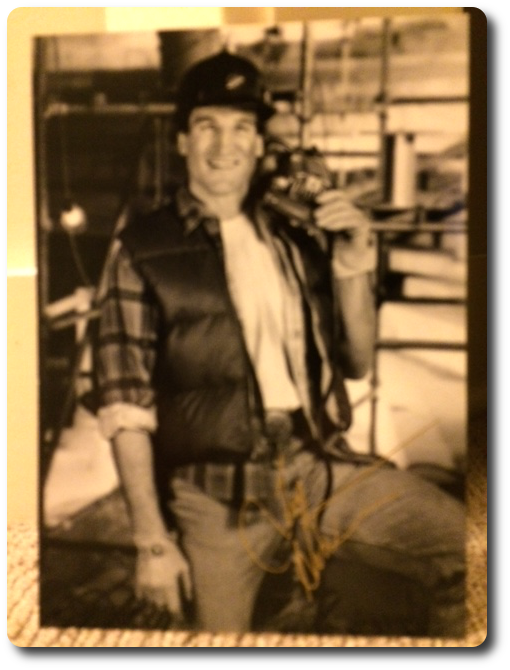 Ah, yes, a slightly out of focus Tim Hunter.

Hunter made his reputation as a Calgary Flames tough guy, so it was kind of weird to see him join the Canucks in the early 90’s.

Despite his Calgary Flames background, fans appreciated his willingness to stand up for his teammates. He was also a part of the toughest Canucks team ever assembled, as that mid 90’s Canucks team was big and mean. Yes, there was a time when the Canucks had a big, tough team that beat up smaller teams.

This picture probably has a little too much groin jutting-out action, but the tool casually tossed over his shoulder says “I would have no problems burying your body in the desert should it come to that. Also, do you validate parking?” 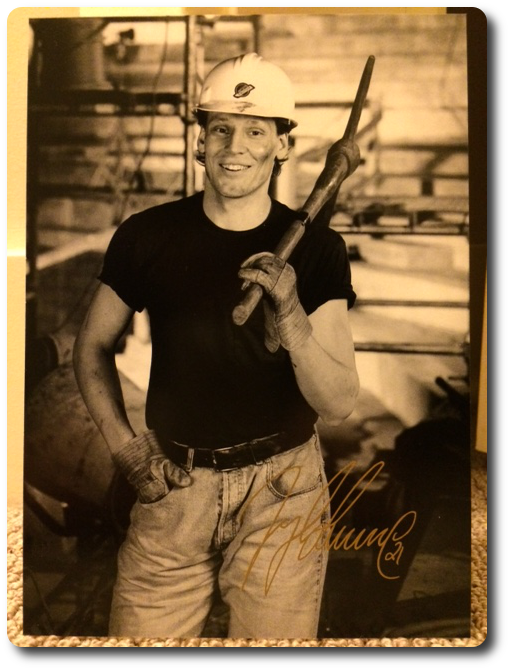 This is Jyrki Lumme in a nutshell. Looks like he’s barely trying out there, but he was always willing to put his glove in his pocket…Ok we lost the metaphor there.

Regardless, if you watched Lumme play, how can you forget watching him set his legs far apart and seemingly glide all over the ice for hours? Mason Raymond circling the zone? Forget it, Lumme INVENTED that move.

Lumme was the Jovo before Jovo. The high flying defenseman who probably held onto the puck a few minutes too long, but was exciting to watch, and could put up the points. 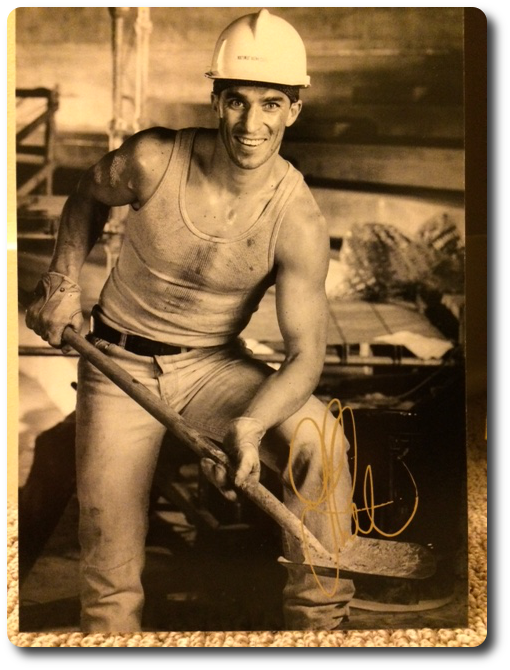 Geoff Courtnall looks like he’s never shoveled a day in his life BUT MAN IS HE EXCITED ABOUT STARTING IT NOW.

Look at the intensity in his face! It’s like somebody just told him Tim Hunter needs help burying a body.

I also want to know if his shirt had dirt put on it for the shoot, or if he just showed up that dirty and they went with it.

Geoff was a streaky scorer in Vancouver, he would go through periods of being invisible, then he would catch on fire and score goals left and right. His most memorable goal? The OT winner against Calgary in ’94 in game 5.

For the rest of my life, I will whisper “94…” when taking a slap shot over the goalies glove from the wing…

Also, Courtnall could totally be an extra in a mafia movie. 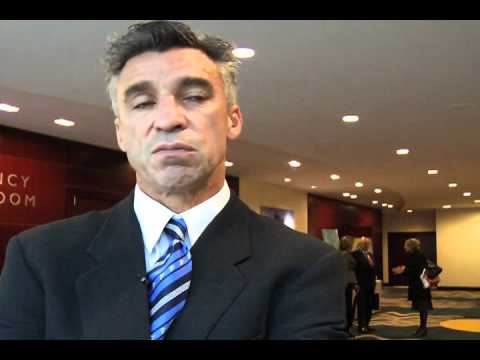 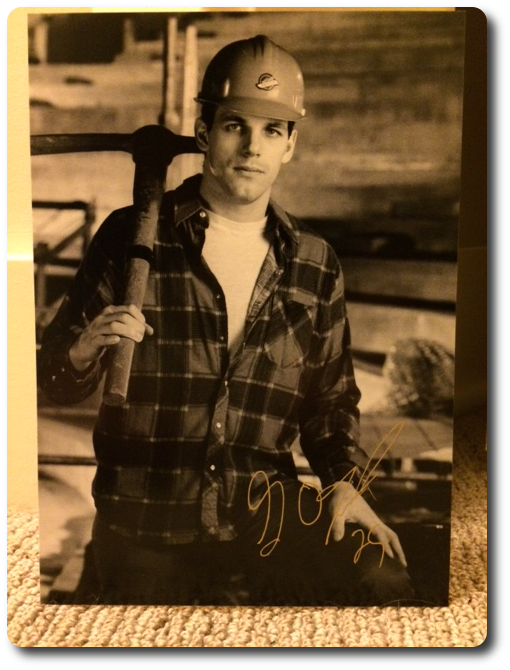 Gino was just fun to watch. He would defend anybody, he was Pavel Bure’s personal bodyguard, and man alive did the fans love him. My main memory of him was him attempting to murder the entire St. Louis Blues hockey team:

And the crowd losing their collective minds when Gino got a penalty shot goal against Vernon: (And yes, my heart cries at the lack of HD memories of hockey before the mid 2000’s.)

Look at Gino celebrate. He’s basically running on the ice, twirling around like he just found out the glass slipper fits. It’s awesome. Gino has a special connection with Vancouver that not many have had, or will ever have.

As for Gino’s picture, he is clearly not happy, mostly because he probably thinks they want him to actually work with that pick axe. 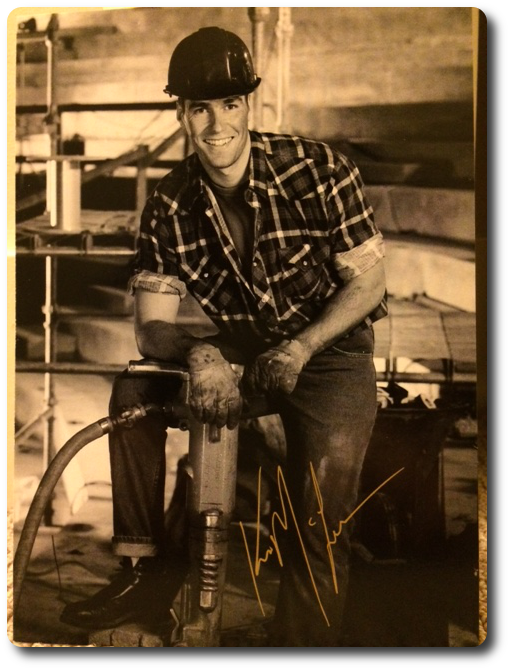 Jeans nicely rolled up, shoes shined nicely. The pose says “I don’t want to get dirty” but the smile says “I’m thinking about…THE SAVE.”

Good god, that is the best save in Canucks history.

I bet McLean has had around a million beers bought for him due to that save.

That’s how you have to say it, too. You need to pause before saying …. the save.

Honestly, how does he get through a day without having someone talk to him about that save.

Now imagine how awesome it would have been had they actually won in ’94. 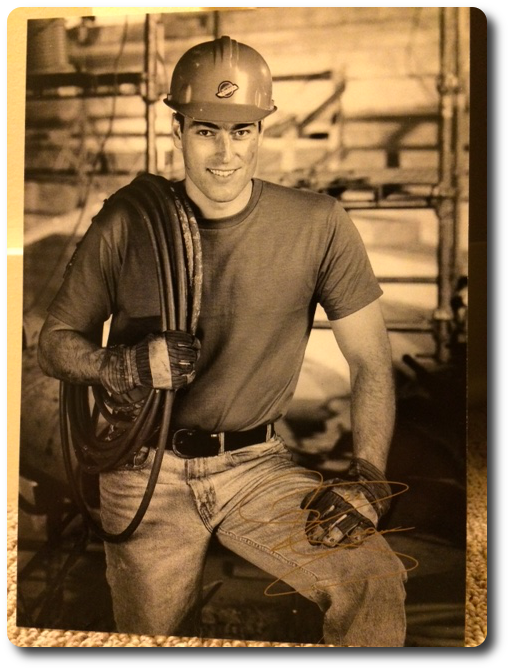 I will leave the comments section to make the Brown/McLean jokes.

All I will say is I am glad McLean had the jack hammer in his picture, and not the other way around.

That being said, Jeff Brown is rocking some super intense eyebrows, and some very serious “it’s 3 am at the bar, and I’m your last hope” eyes in this picture. 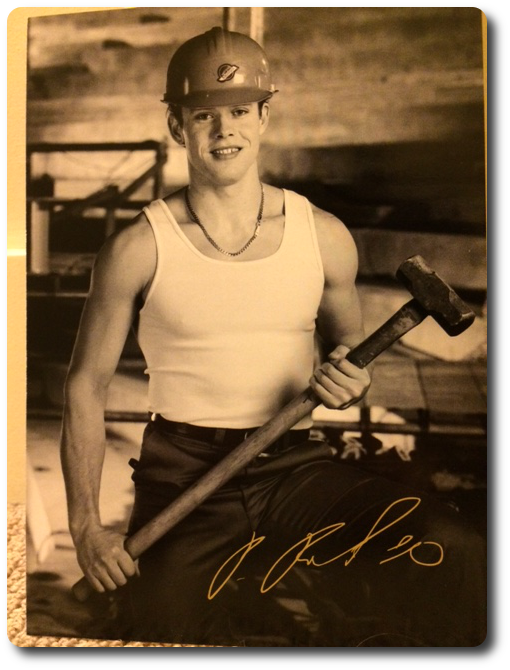 This man needs no introduction, as he is the man who kind of hates Vancouver and moved to Florida, but finally got his jersey retired in Vancouver!

Yes, Pavel Bure, the most exciting Canuck of all-time. He was Ovechkin before there was an Ovechkin (minus the Mr. Big ads). Pavel Bure was made for the YouTube era, and it’s just a shame many of his plays have been lost to eroded film reels.

While some of his goals are still on YouTube, let’s talk about … the elbow.

Yes, an elbow so viscous, it actually made Don Cherry like a Russian hockey player. It was that crazy. I still have no idea how Bure didn’t break his elbow on Churla’s face.

Fun fact behind that elbow: Bure wasn’t suspended for it. He was merely fined $500. Then a local radio station raised money to pay it off.

If that system was still around today (fans paying off fines), imagine how much money they’d offer for Brad Marchand…

As for the picture, Bure is wearing dress pants and the cleanest shirt you’ll ever see. He does not intend to swing that sledge for a second. I’m amazed he didn’t get Gino to run over and hold it for him.

“I have date after this, you hold sledge Gino.” 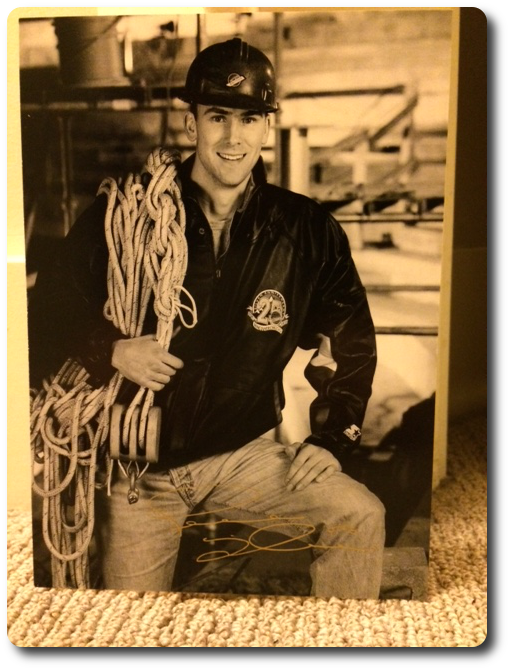 What’s great about this picture is Linden probably worked with tools like this all the time. Hell, he probably built the entire photo set they used for the shoot.

It’s also another reminder of how spindly Trevor is. He is a tall tall man, but he is so very thin.

There’s not much you can say about Trevor that hasn’t already been said, so let’s just finish this up with the greatest Canucks hit of all-time.

OK, one more. Trevor Linden’s game winning goal against Dallas in 2007, proving that even at the end of his career, he was still Mr. Clutch.