Canucks memorabilia can come in all sorts of shapes and sizes. You can find lunch boxes, backpacks, or even Monopoly games adorned with various Canucks logos. “But Wyatt, why can’t I just see Canucks from the past dressed up as construction workers?” you ask? Well, look no further friends, your prayers have been answered.

While visiting the Vancouver Flea Market this weekend, I came across what can only be described as the find of the century (fair warning, I tend to exaggerate). After fighting off mobs of people using my lightsabre and with the help of my Transformer friend Soundwave (again, I exaggerate), I happened upon this little beauty from my past: 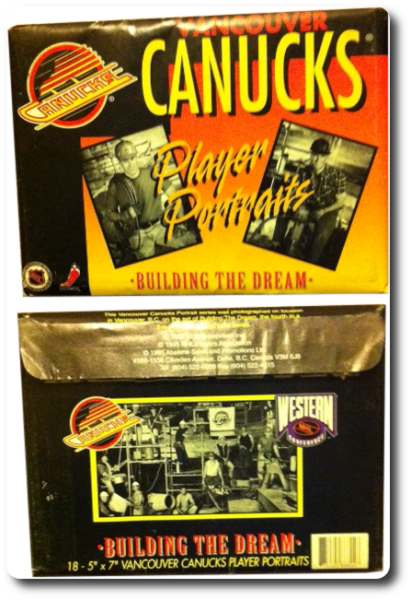 That, my friends, is part of a quintology of photos series the Vancouver Canucks put out in the mid ’90’s. You might remember the Canucks going on trial, or perhaps the Canucks doing their best John Wayne impersonations. There were five made in total, all of them with some pretty awesome names.

You had “The Big Steal”. (You see, because they’re dressed up as mobsters stealing things)

You had “Road Trip”.

You had “On Trial.” (Todd Bertuzzi and the riots made googling for this one a bit tougher than it used to be)

You had “On To Victory”

And finally, you had “Building the Dream”, which is the collection of photos I purchased (for only $10. That is a god damn steal).

Now, before today, I had only seen the group photos of all the players dressed up in their various costumes. This little beauty I picked up today has 18 individual player photos. So I thought it would be fun to take a little stroll down Canucks memory lane as we looked back on the joyful time known as mid-1990’s NHL marketing. 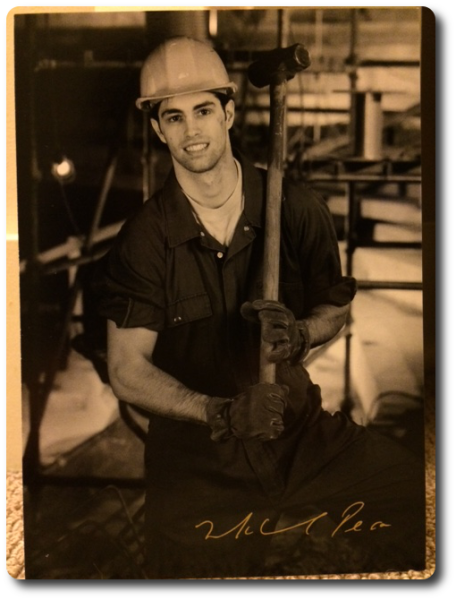 That’s Mike Peca, a 2nd round draft pick of the Canucks, back when they occasionally drafted players in the second round that actually made the NHL. His career in Vancouver was short lived, as he was soon a part of the trade that brought Alex Mogilny to Vancouver. In this picture he looks nice enough, but what you don’t see is the murderous rage he would use to take out Teemu Selanne (please note how his eyes aren’t smiling in this picture).

Because Teemu Selanne was granted immunity by the Hockey Gods, Mike Peca ended up breaking his OWN jaw on the hit (apparently murderous rage comes with a price). I’d like to think Peca spent the next six weeks off building himself a house with his new-found construction skills. 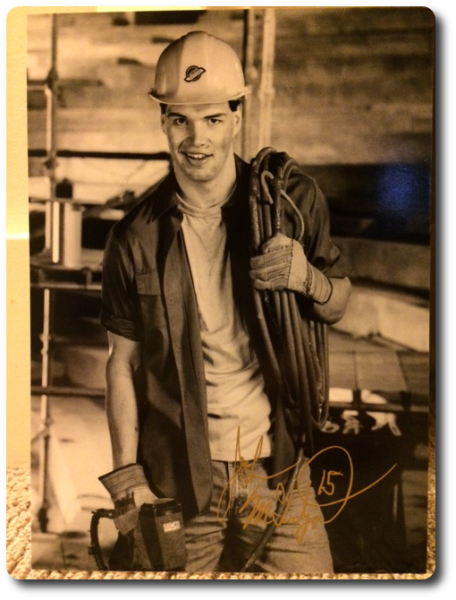 That is John McIntyre, a scrappy defensive forward who carved himself out a decent six year NHL career. His most famous stop was with the 1994 Canucks on their run to the Cup. You might also remember him as a creepier version of John Leguizamo (which I didn’t think was even possible up until this point). 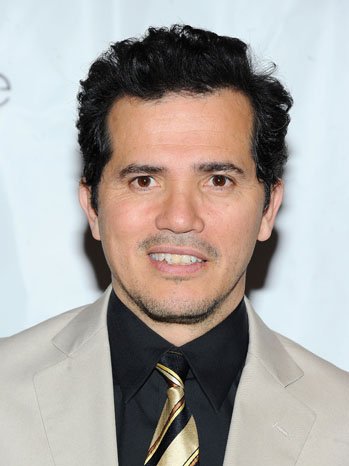 I think it’s the fact John McIntyre is holding rope in one hand, and a power tool in the other that up the creepiness factor. You just know John is looking at you and revving that tool suggestively. 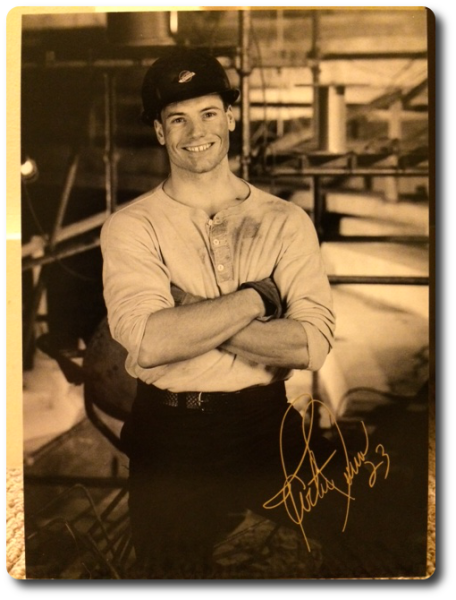 That is Martin Gelinas, before he turned into a Calgary Flame jerk and ruined what was to be the best night of Alex Auld’s career in the 2004 playoffs. Martin Gelinas has that polite looking quality many French-Canadians have, where you feel like they just want to invite you over for some poutine and maybe a quick game of racquetball. Only if you have the time, of course. 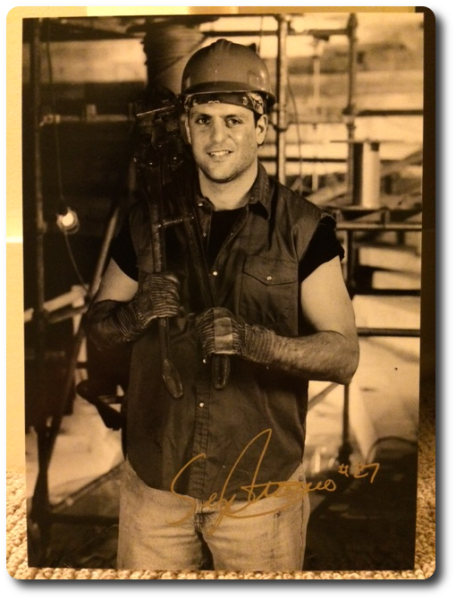 This is none other than Sergio Momesso. He was Zack Kassian before there was a Zack Kassian in Vancouver. Take a look at a scouting report that could be for either guy:

“He continued to show glimpses of his ability to be an above-average power forward, but would frustrate with stretches of ineffective, uninspired play and was prone to undisciplined penalties.”

The major difference between the two is that Zack Kassian’s arm hair doesn’t mysteriously disappear the moment it passes his elbows. You might think Sergio is wearing gloves in these pictures, but he’s not. That’s all 100% natural Italian hair baby. 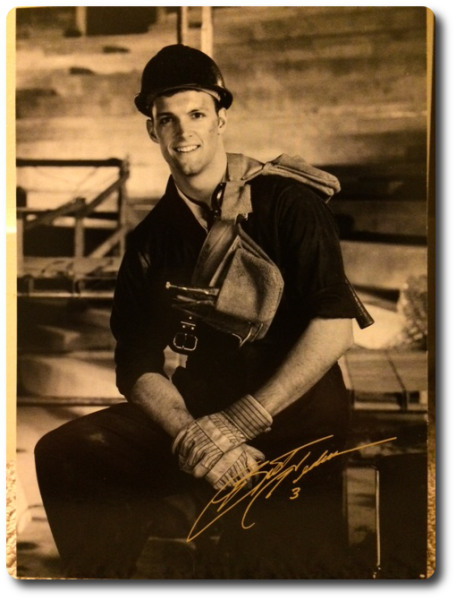 Yes, that is Bret Hedican, who clearly has not worked with many tools in his life. I assume they handed him a tool belt and he looked at it with a super confused look on his face, before trying to take a bite out of it. “No Bret, it’s not food. It’s a belt.” Bret then took this to mean it was like a championship belt, so he slung it over his shoulder. Look how proud he is!

(Bret is a super nice guy in real life, let’s hope he doesn’t read this and get angry at me) 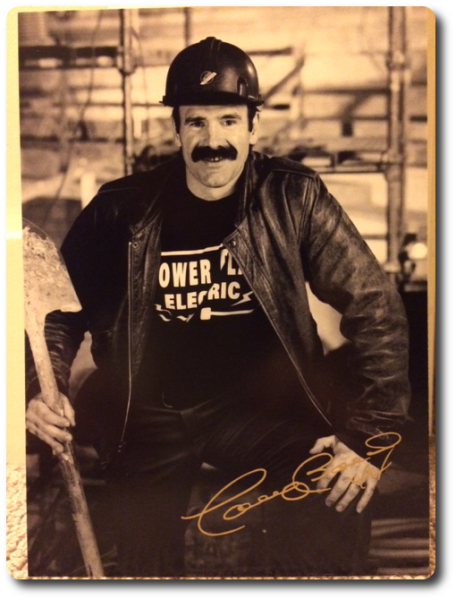 The minute you saw that manly soup catcher, you knew who it was. For the younger fans reading this, this is Dave Babych. Dave Babych laughs at the idea of Movember. He believes in Molife. All mo, all the time. He is posing like he’s kind of confused as to what his character’s motivation is, but he’s giving it his best effort anyways. 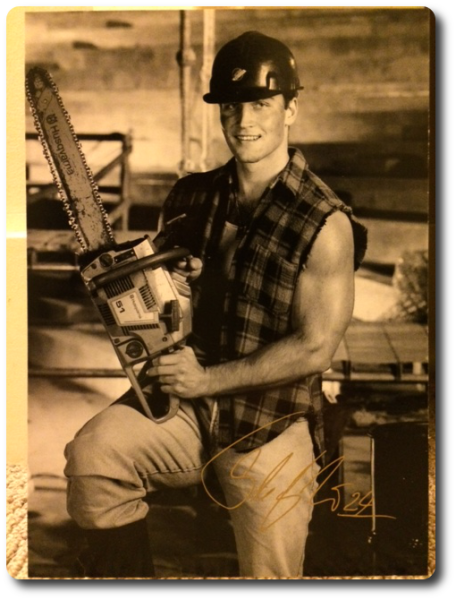 Don’t feel bad for not placing this guy quickly, Jiri Slegr has a very forgettable face. He actually had two very solid offensive seasons in Vancouver (including a 38 point season in ’94), causing many people to think the Canucks had found their next offensive dynamo on the back-end. Alas, Slegr would play no games during the ’94 Cup run, showing that history is littered with players who get benched because of their apparent fear and hatred of the defensive side of the game.

Jiri would then spend a solid year shooting the puck super fast at teammates heads instead of the goalie, as his ability to hit the net began to wane. If you played road hockey during this time, you would invariably scream “SLEGR!” anytime you shot the ball over the net. 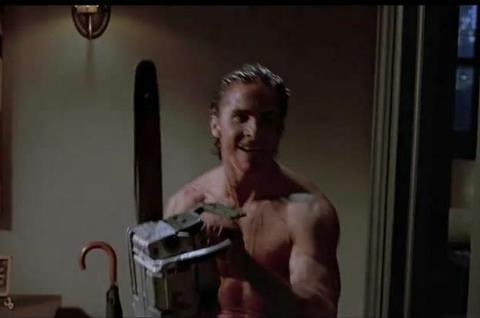 Is the ice bone white or egg shell white, Jiri? 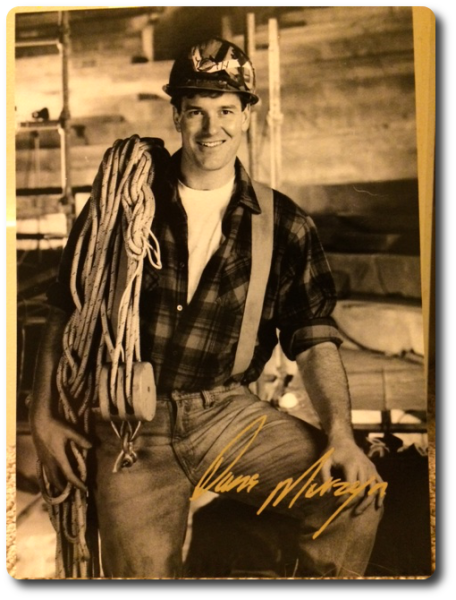 This is Dana Murzyn. He was the scapegoat of the Canucks before the internet existed. You know how much grief Sbisa gets? Times that by a million and you’d kind of be getting close to the level of hatred Dana Murzyn got in Vancouver. His name became synonymous with “pylon” in BC. Again, this was BEFORE the internet. To get that many people coordinated in their dislike of one player back then is pretty damn impressive.

The reason for all of the anger? Murzyn was a terrible skater (relative to the NHL. Relative to me he is Pavel Bure). His lack of agility and speed meant he would get regularly turnstyled by speedy forwards (or basically anybody skating forward above 3mph). As the 90’s wore on, so did Murzyn’s usefulness as the NHL slowly tried to take away “chop down his legs and make him drop like a tree” crease play.

Back in the 80’s and early 90’s, Murzyn actually was actually quite useful. He was paired up with Lumme a lot, who could skate like the wind, which left Murzyn to do the dirty work. He would attempt to murder anybody who went near the Canucks crease. Including Wayne Gretzky. 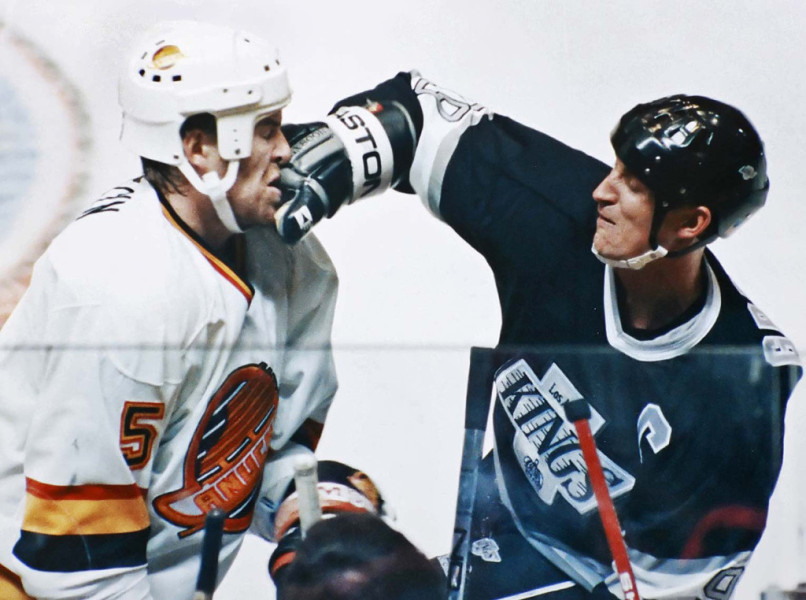 However, once you embrace the scapegoat way of life, few escape from it, and Murzyn was no different. If a goal was scored, somehow it ended up being his fault. “Murzyn has to work the bench door quicker, that goal is his fault, god damn Murzyn.”

This picture encapsulates his career perfectly. He’s trying so hard, he is giving it his best effort, and he looks like a guy we’d all love to have a beer with. Yet if there is an accident on site, you can bet your ass we’re going to blame it on Murzyn. “I’m pretty sure I saw him operating some heavy machinery without any safety goggles on, boss. The forklift went right by him and he didn’t even stop it.” 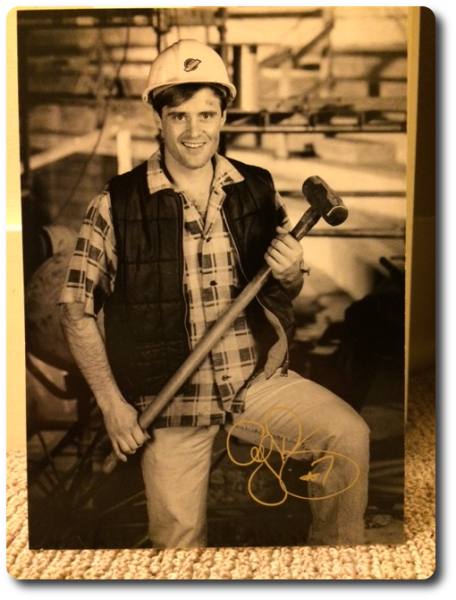 Ah, Cliffy. Hometown hero, Burnaby’s own Cliff Ronning, listed at 5″8 but looked more like 5″2, was part of the famed Life Line of the Canucks in the early 90’s (One of the first nickname lines for the Canucks. They stole it from Winnipeg.). Ronning, Courtnall, and Linden were the exciting new breed of Canucks back before Pavel Bure came to town.

Cliff Ronning’s career is made all the more amazing because he played a majority of his career during a time when players could basically attempt to snap your limbs off one-by-one in the playoffs, and the refs would merely scream at you to man up. 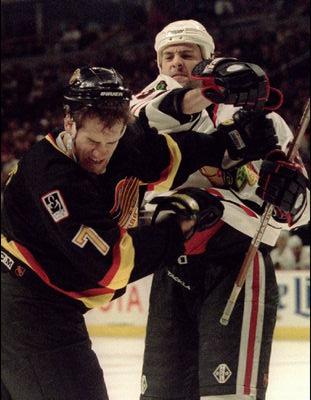 *If you recognized the fact it’s former Canuck Enrico Ciccone punching Ronning, you watch too much hockey

Ronning put up a career high 85 points in ’93, and continued to be a solid 50+ point player until one year before he retired in 2003. Ronning, of course, was not re-signed by the Canucks in ’96, who instead eventually went with Mark Messier a year later.

Everybody take a deep sigh right about now.

Ronning, who ranks as one of the best passers in Canucks history, played with a broken hand in the ’94 Finals and was still dishing out sweet set-ups to Trevor Linden. Ronning also had some buddies at EA Sports, who made his player the equivalent of God in NHL ’93.

All of this is merely context for the background of the construction photo. It shows a small man who is smiling, but if you look closer, you see a man who will smash you in the head with a sledgehammer to get by you. Or possibly blow-up whatever room he is in. 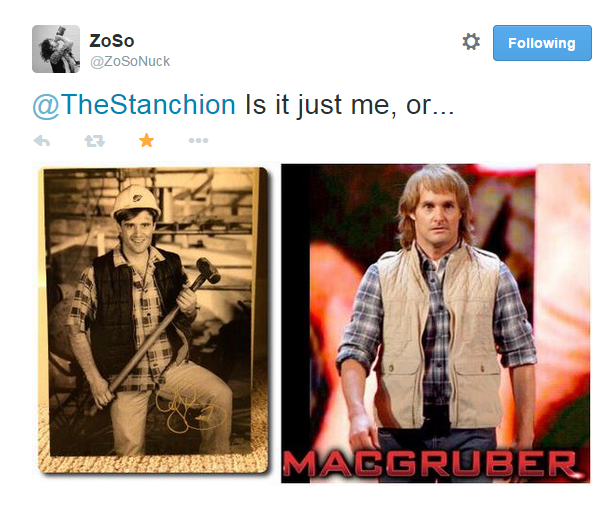 Next week we will look at Part two of this photo series, where we will see pictures of a young captain, a Russian enigma and his bodyguard, and a goalie or two.