British Columbia is projected to lead Canada’s provinces in economic growth this year, marking the first time the westernmost province has topped the country in real GDP growth in a decade.

According to the Bank of Montreal’s (BMO) latest Blue Book economic outlook, faltering oil prices have interrupted Alberta’s long-held position as the nation’s leader in economic growth. The province is in a recession with growth expected to slow to an anaemic 0.4 per cent in 2015.

But it is a completely different picture in neighbouring B.C. with the province’s real GDP poised to remain stable at 2.6 per cent for 2015, repeating the growth experienced the previous year, before falling slightly to 2.5 per cent in 2016.

Even with the small dip, the current economic forecast indicates B.C. will remain as the pack leader until at least next year.

Currently, B.C.’s strong economic position is due in part to a relatively diverse natural resources sector as well as a robust housing market fuelled by low mortgage rates.

BMO economist Robert Kavic notes that the province’s economy has little direct exposure to oil, but there is still uncertainty in the mining sector due to a drop in mining investment.

Development on the provincial government’s much-touted liquid natural gas projects also remains highly ambiguous due to lower prices and industry consolidation, and even if the projects proceed the economic benefits are still years away.

Overall labour market performance has been deemed “disappointing” as employment is only up by 0.5 per cent year-over-year during the first quarter because of weakness in the public sector and construction industry, but the unemployment rate is low at 5.8 per cent and interprovincial migration is now positive.

Meanwhile, residential property sales in Metro Vancouver soared to new levels in March 2015, the highest in nearly a decade, while sales across B.C. were at their best in more than five years. Housing starts are stable across the province with 28,000 units in the works, which is consistent with the numbers seen over the last four years.

“That said, Vancouver still faces an elevated number of completed but unoccupied units on the market (mostly condos), but that continues to trend down,” Kavic states. “As a result, new residential construction activity will likely remain relatively stable as current supply is absorbed.”

“While the housing market continues to strengthen, particularly in Vancouver, firm U.S. demand and a weak Canadian dollar should offset the slowdown in China and uncertainty in the mining sector.”

Demand from Chinese investors and the resurgent U.S. housing market continues to grow exports in agriculture and forestry.

Tourism is anticipated to benefit from a low Canadian dollar, with an increase in visitors from the United States and more Canadians traveling within the country.

When it comes to the provincial government’s finances, B.C. will be the only province to achieve a balanced budget this fiscal year. In February, the government announced a surplus of $879 million coupled with some spending increases to support new policies. 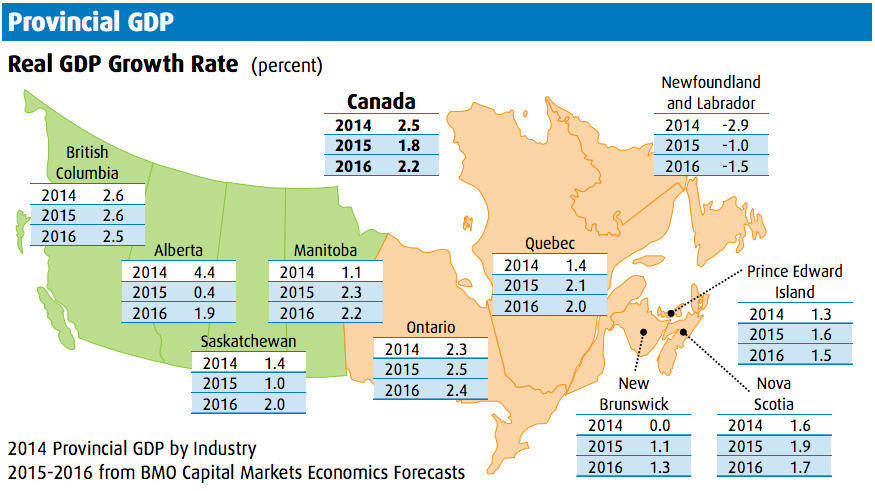