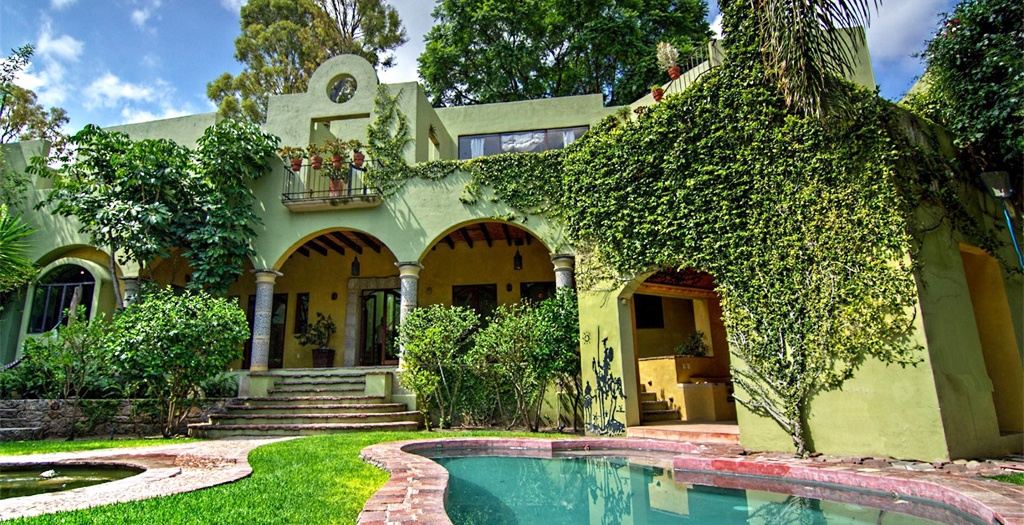 It probably hasn’t escaped your notice that the cost of an average home in Vancouver has risen above $1 million – but what could you buy for that price around the world?

Using the composite benchmark price for all residential properties in Metro Vancouver for August – $1,029,700 – Point2Homes set about finding out.

Looking at 25 different locations, the real estate portal found that the hefty sum would give you quite a lot of interesting options around the globe.

As discovered by Point2Homes, here’s a roundup of what you could be buying around the world: 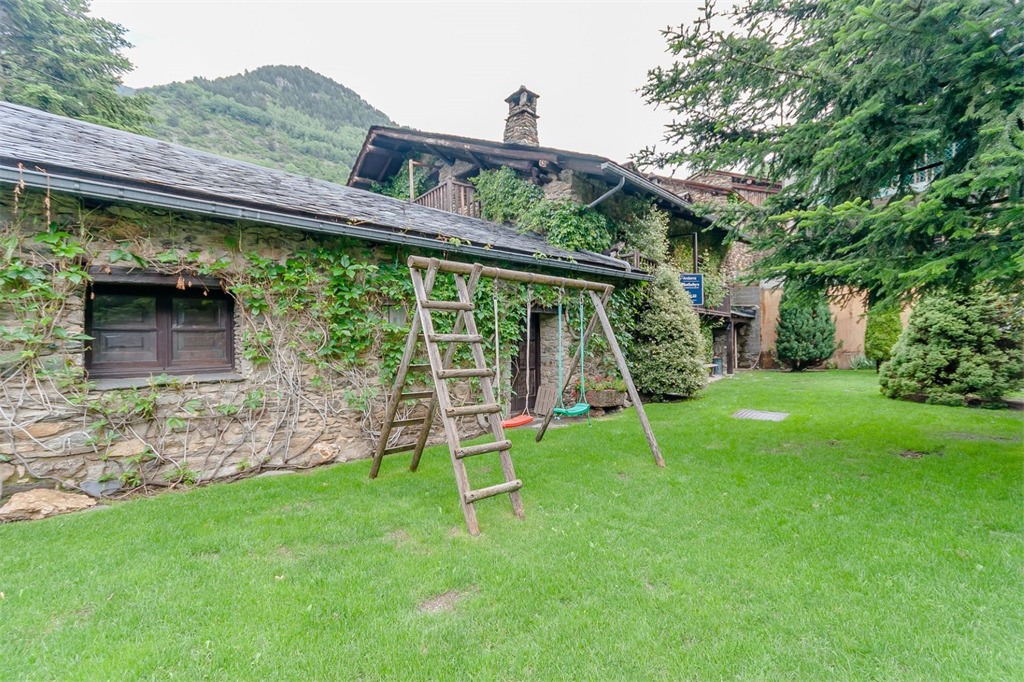 This “rustic” house in Spain may look humble on the outside, but inside you’d be living in the lap of luxury, with a 4,843-sq-ft lot, including three bedrooms and four bathrooms.

As well, you could enjoy a large fully equipped kitchen, wine cellar, pantry, two breakfast areas, and a living and dining room, both with fireplace mountains.

Worth knowing – Os de Civis, where the home is situated, is tiny, with only 104 residents at last count. And it is only reachable by going through Andorra. 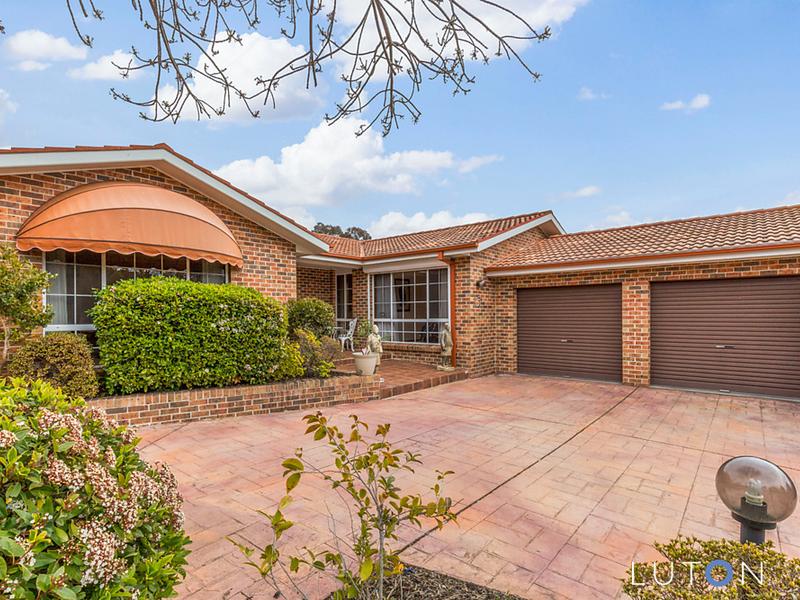 You’ll also have a pool and spa to relax in, your own private putting green to potter around on, an outdoor sitting area, and a double garage.

Worth knowing – it’s a 20 minute drive to downtown Canberra, Australia’s capital, and you’ll be sharing its lakeshore, forest, and nature reserves with its 3.5 million residents. 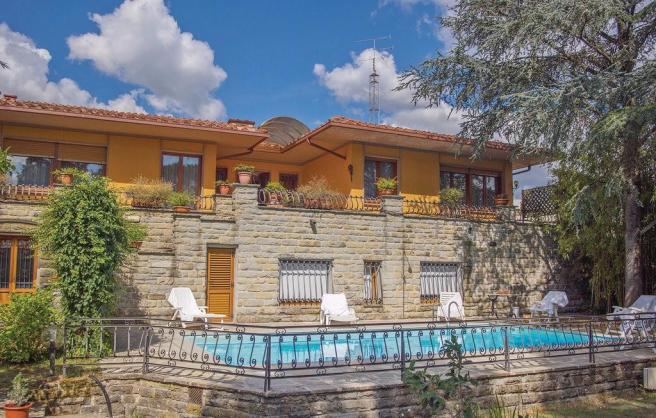 This “gorgeous” villa in the Tuscany region in Italy offers six bedrooms and four bathrooms, spread over two floors, on a 5,640-sq-ft lot, with a pool, gardens, and huge garage.

Worth knowing – Vicchio, where the villa is located, has a population of only 8,105 people, and it’s a 90-minute drive to Florence’s historic centre, a UNESCO World Heritage Site. 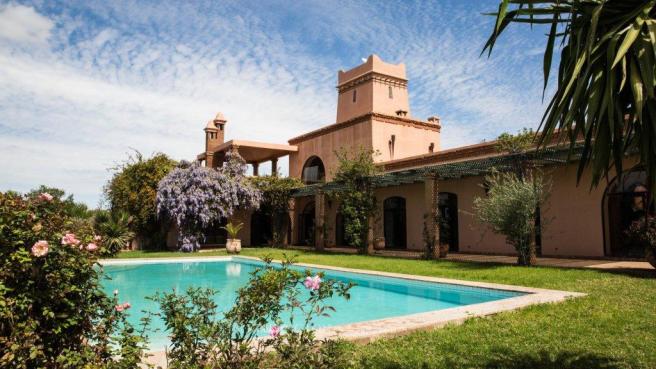 Villa Zaouia, in Marrakech, is described as a “charming” property, in the spirit of a “Spanish hacienda.” And at 7,000 sq. ft., that’s a pretty huge hacienda.

Inside, you get four bedrooms and four bathrooms; outside you get a gargantuan garden covering 100,000 sq. ft. of land.

Worth knowing – Marrakech has a population of 9.28 million people. Morocco’s monarch can make sweeping decrees, overruling parliament, unlike Canada’s monarch. 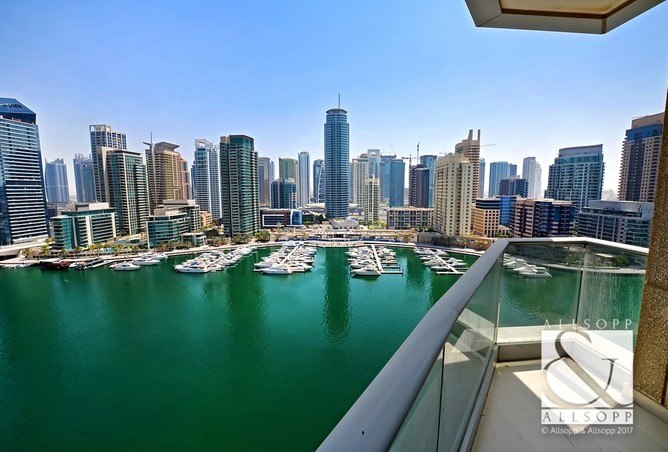 The marina view from an apartment for sale in Dubai (propertyfinder.ae)

This apartment in Dubai, the largest city in the United Arab Emirates, has one hell of a view. It also covers 1,500 sq.ft., with two bedrooms and two bathrooms.

Worth knowing – Dubai has a population of 2.8 million people, all of whom live under an absolute monarchy with no elections, with a heavily criticized human rights record. 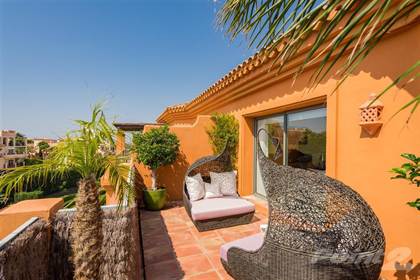 This “fantastic” penthouse on the Costa del Sol in Spain offers three large bedrooms, all with ensuite bathrooms and underfloor heating.

As well, you can enjoy a large terrace that surrounds the whole house, which is situated in a private complex that includes a spa and several outdoor pools.

Worth knowing – San Pedro de Alcántara, where the home is located, is home to only 26,500 people and is a 15-minute drive to Marbella, one of the most touristy cities on that coast. 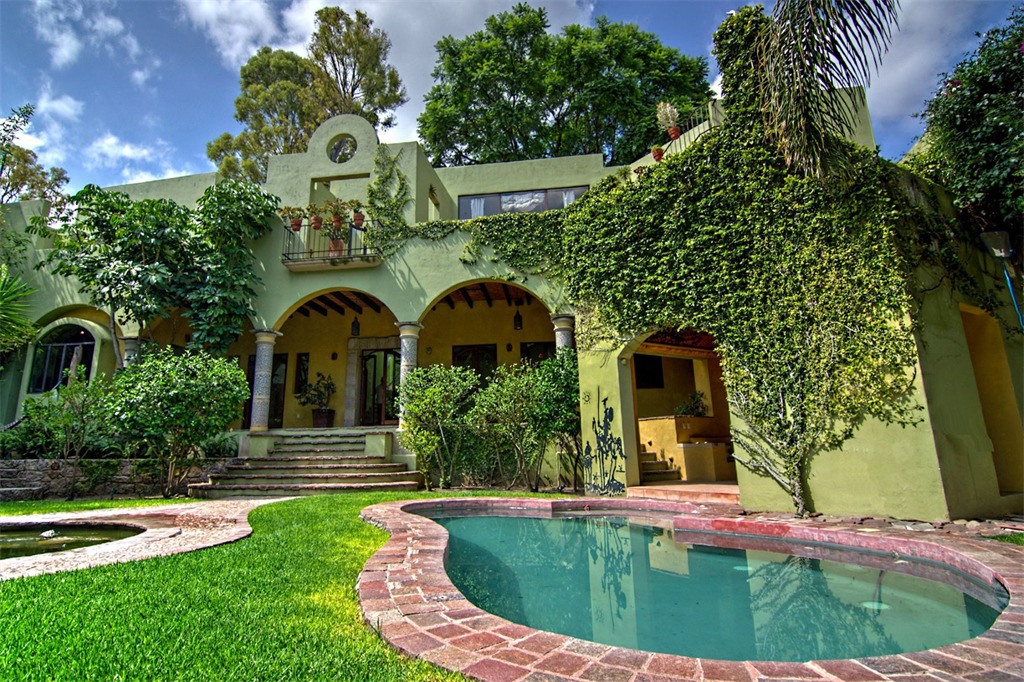 This “amazing oasis” in the state of Guanajuato in central Mexico offers large living rooms and three bedrooms, all with ensuite bathrooms and looking into the garden.

In the garden, you’ll find a turtle pond and swimming pool. Or why not head to the large roof terrace? This home also comes with three casitas you can use for rental income.

Worth knowing – San Miguel de Allende, where the home is located, has a population of only 139,000 people. Its historic centre is a UNESCO World Heritage site. 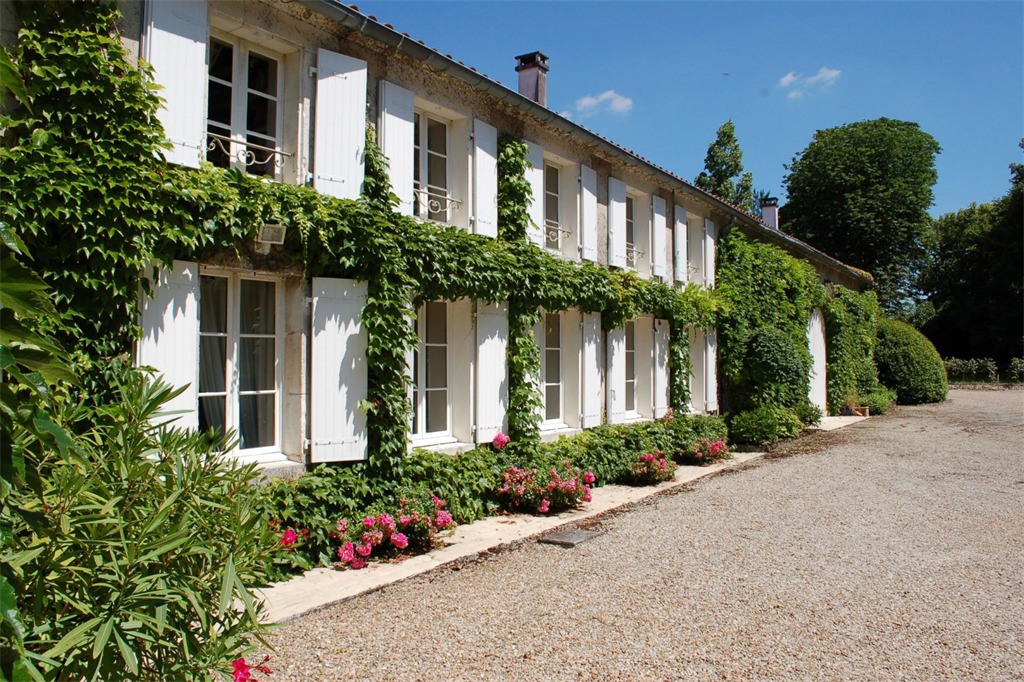 This “bourgeois” house in Cognac, France offers 20 rooms altogether, including four reception rooms, six bedrooms, a cinema room, and office, on a lot of 5,328 sq.ft.

Outside, you’ll find privacy among the 1.5 hectares of landscaped grounds, as well as a swimming pool, outside dining area, and outbuilding.

Worth knowing – Cognac has a population of just 19,000 people. Oh and don’t forget the copious amounts of cognac brandy just waiting to be drunk here. 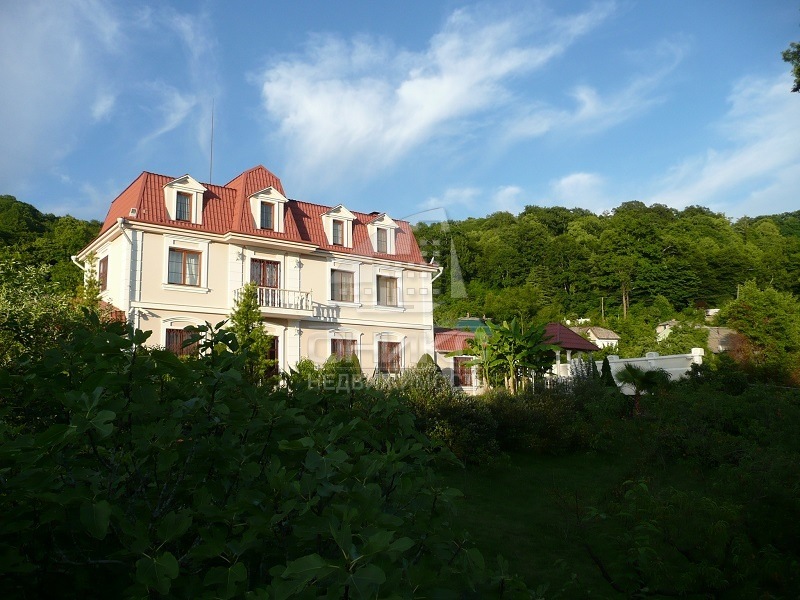 House among an arboretum in Sochi, Russia (Oniks)

The listing for this home among the arboretum is all in Russian – however, with our knowledge of the Cyrillic alphabet, and let’s face it, Google Translate, we can tell you this:

You’ll find sequoia, maple, palm trees, agaves, and spruce growing in the forest around the house and this home offers three bedrooms, and 3,552 sq.ft of living space.

Worth knowing – this home is a 20-minute drive from Sochi, host city of the 2014 Winter Olympics. It has a population of 343,000, and is one of the few places in Russia with a subtropical climate. 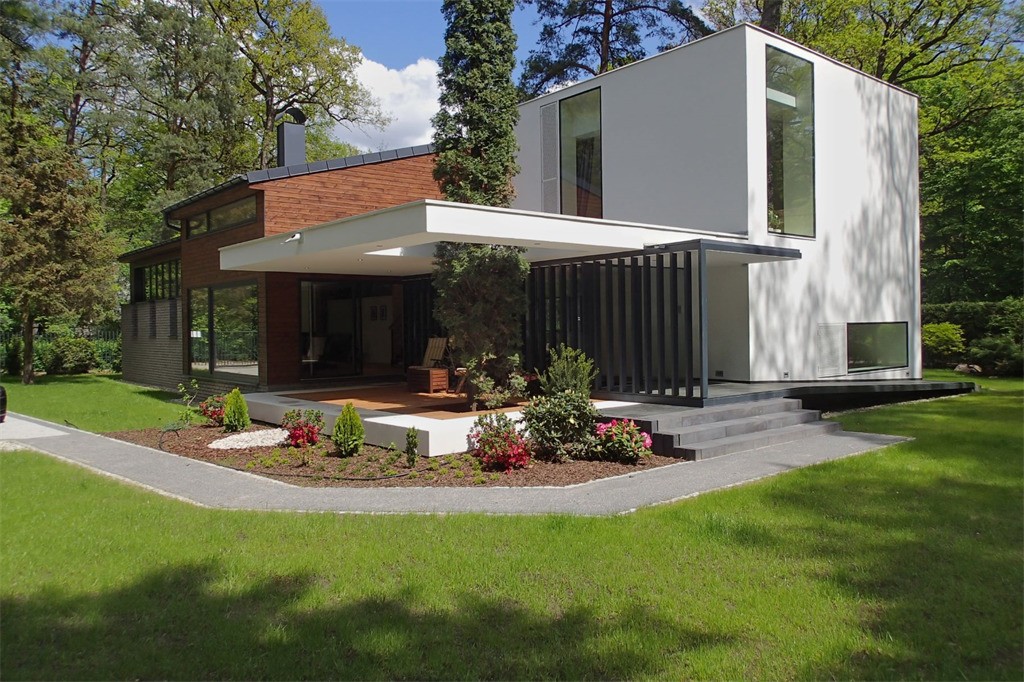 This modernist villa near Warsaw, Poland offers a lot of 2,895 sq.ft., including five bedrooms and mysteriously, just one bathroom.

Still though, this avant-garde villa was built according to a design by world-famous architect Bohdan Lachert, so it’s a piece of history.

Worth knowing – Podkowa Leśna, where this villa is located, only has 4,000 inhabitants, and it’s a 30-minute drive to Poland’s capital, Warsaw. 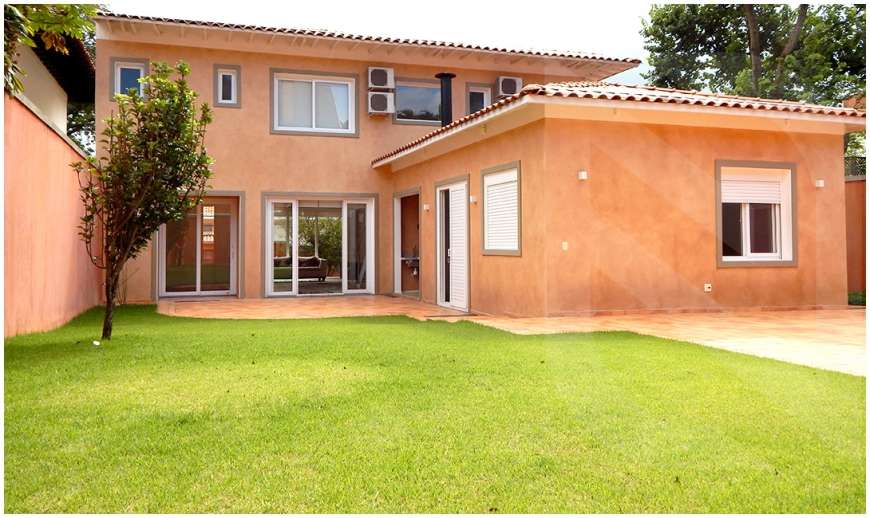 You can also enjoy a large living room with a fireplace integrated into the garden and leisure area outside.

Worth knowing – it’s a 30-minute drive from this home to the centre of São Paulo, which has a population of 12 million people. 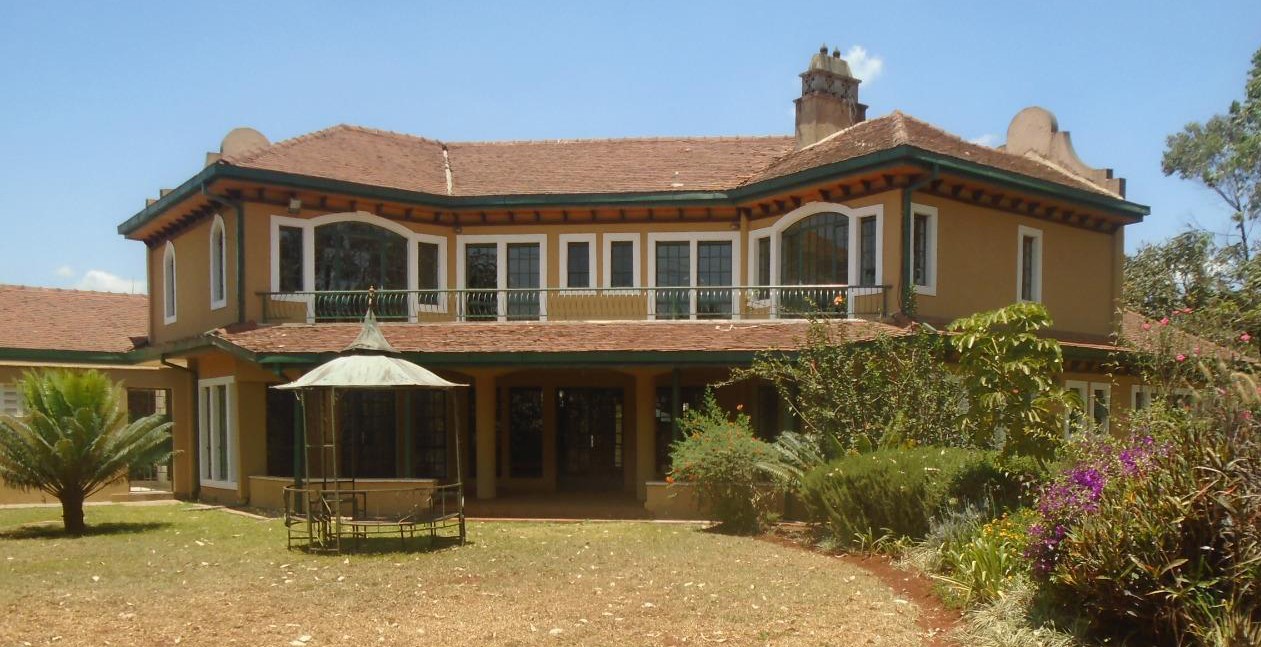 This “elegant house” in a gated community on the outskirts of Kenya’s capital offers a living area of almost 27,000 sq.ft. plus a garden, swimming pool, and clubhouse.

Worth knowing – it will only take you a 15-minute drive to get to the downtown area of Nairobi, which has a population of 3.1 million people. 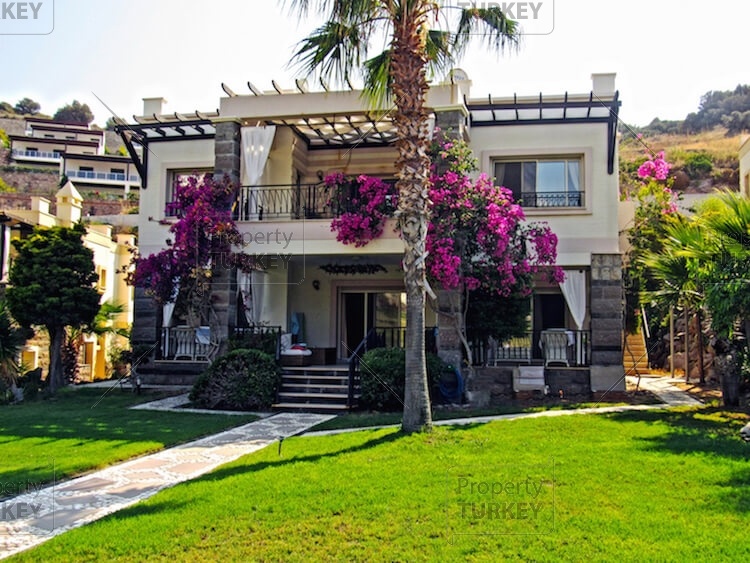 This luxury villa in Yalikavak, near Bodrum, in Turkey is fully furnished, and offers ocean views and a shared private beach.

This home has marble flooring in communal areas, along with five bedrooms, all with ensuite bathrooms, and a spacious dining area.

Worth knowing – Yalikavak has a population of only 8,700 people, but it will take you only 30 minutes to drive to Bodrum, a slightly busier coastal city. 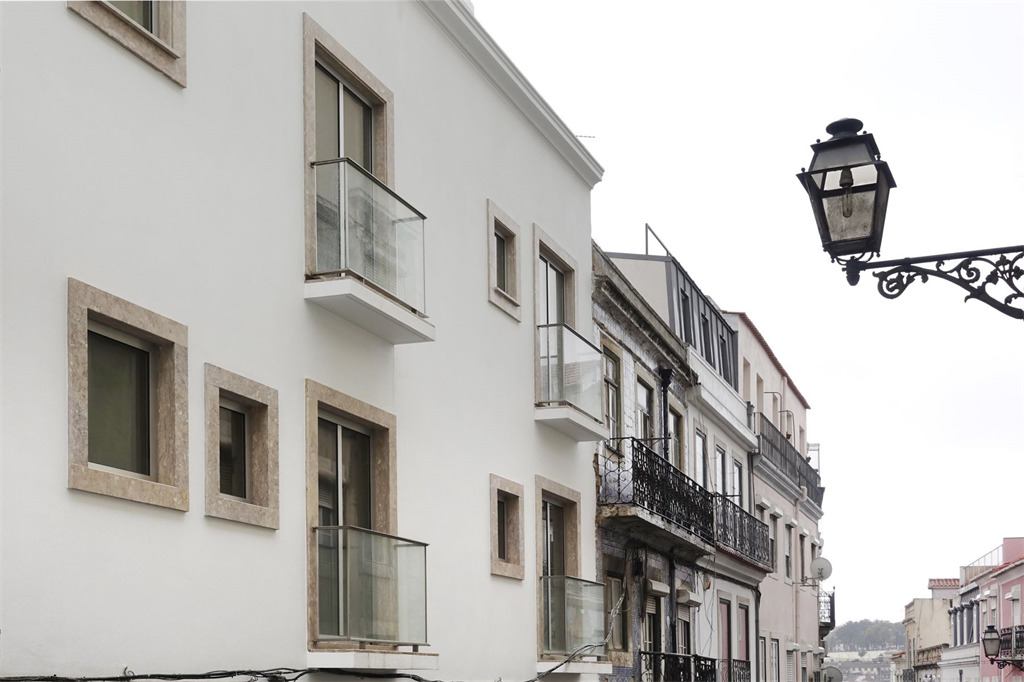 This terraced house in the Portuguese capital offers three bedrooms, and a modern, light and airy decor spread over 1,571 sq.ft. of living space.

Worth knowing – Lisbon is the wealthiest region in Portugal, and is well above the European Union’s average GDP per capita. 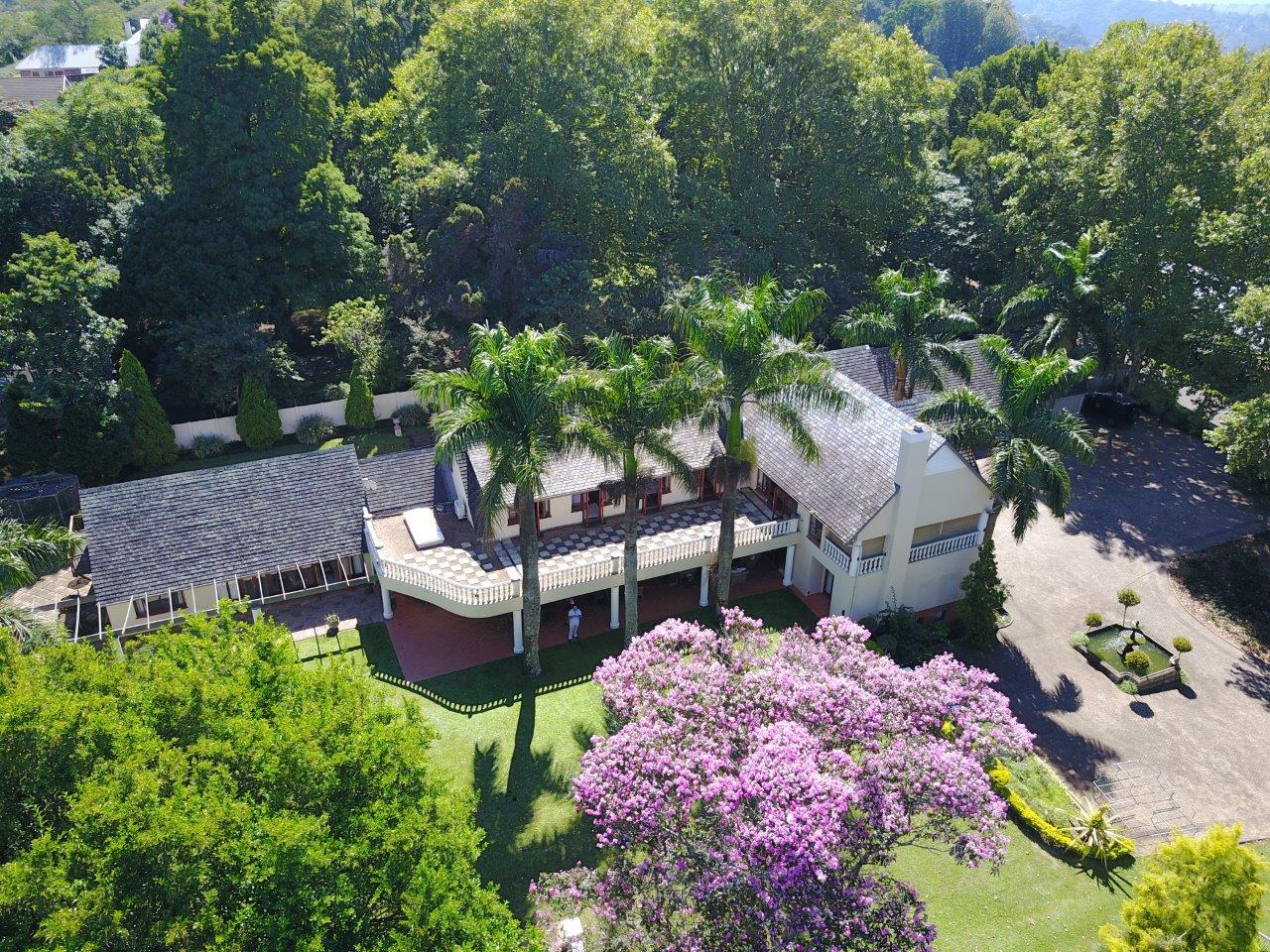 This “exquisite” residence near Durban in South Africa offers a living area of 11,000 sq.ft., including six bedrooms, four bathrooms, and staff quarters.

Worth knowing – Kloof is an upmarket neighbourhood, with only 29,704 residents, but it’s only half an hour’s drive to the more bustling downtown Durban. 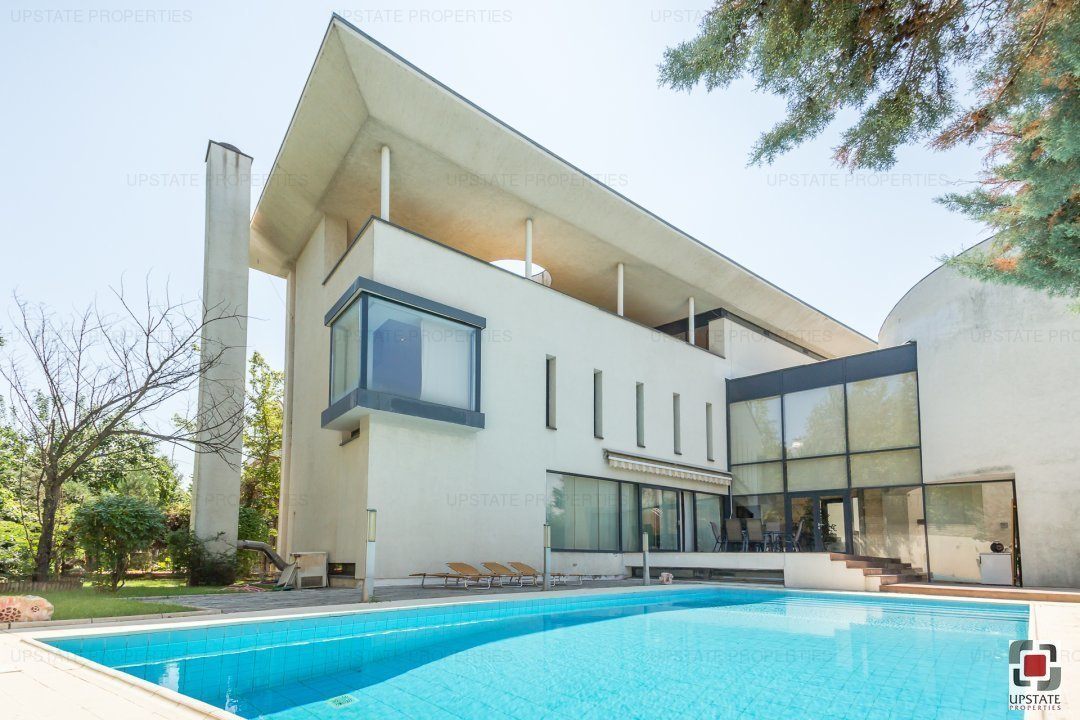 This residence in Voluntari, near Bucharest, Romania, offers more than 5,000 sq.ft. of living space, including eight bedrooms and six bathrooms.

You’ll also be able to enjoy a swimming pool, sauna, and fireplace, along with parquet, sandstone, and marble flooring inside.

Worth knowing – this home is very close to the airport, and it will take you 20 minutes to drive into downtown Bucharest from here. 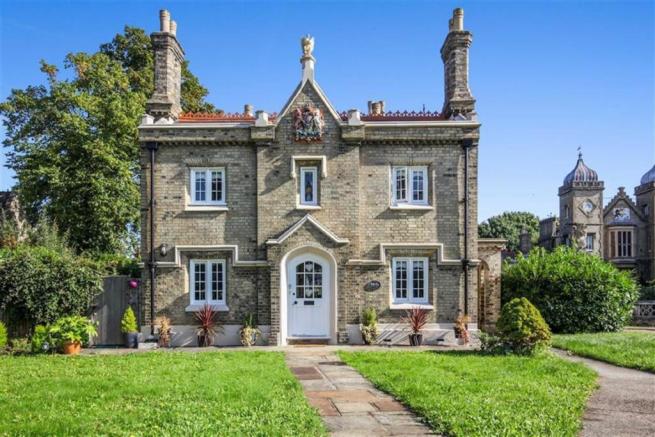 This “spectacular” home in Penge, a suburb of London, was built in 1841, and offers 744 sq.ft. of living space, including two bedrooms and two bathrooms.

You’ll also be able to enjoy a well-maintained, secluded private garden, with a church on one side, and historic almshouses on the other.

Worth knowing – Penge is the archetypal commuter suburb; it will take you half an hour by car or train to get to central London from this home. 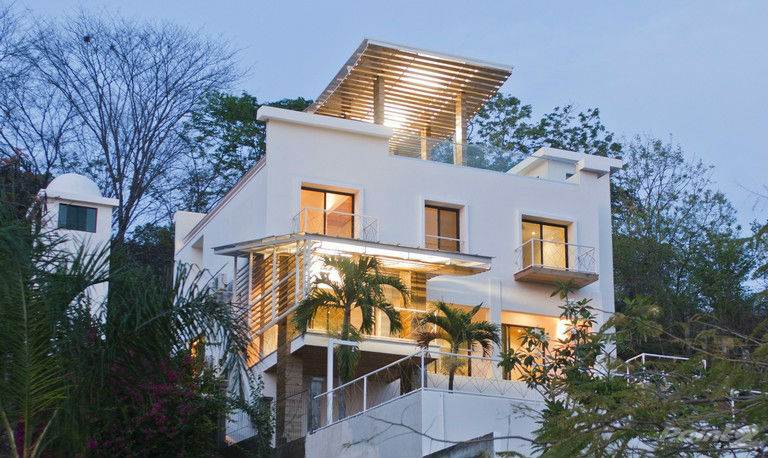 This “gorgeous” home above Playa Penca sits on a lot of 15,000 sq.ft. and includes three bedrooms, 2.5 bathrooms, plus an extra two-bedroom guest house.

Worth knowing – Playa Penca is tiny, and is one hour’s drive from the biggest city in Guanacaste province, Liberia, which has a population of 56,899 people. 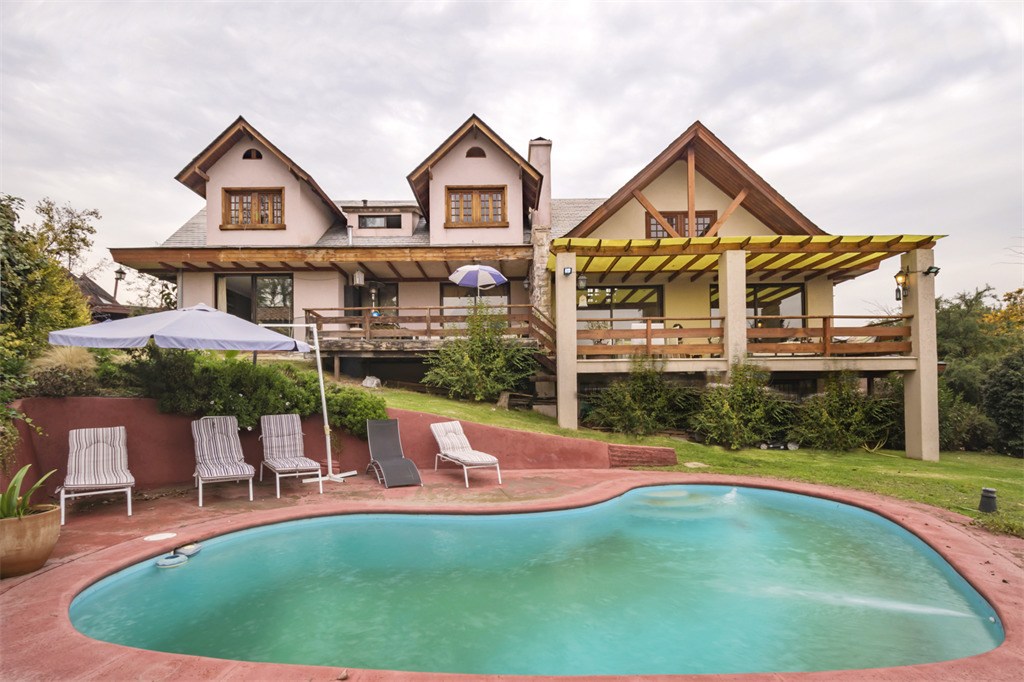 This “Swiss colonial-style” home on the outskirts of Santiago, Chile offers 4,843 sq.ft. of living space, including five bedrooms and four bathrooms.

You’ll also get double height ceilings, a terrace, a pool, service rooms, and a tree-lined garden – and it’s all on a closed street for almost total privacy.

Worth knowing – it will take you about 45 minutes to drive to central Santiago, which has a population of more than seven million people.

‘Entertainer’s’ home in Los Angeles, US 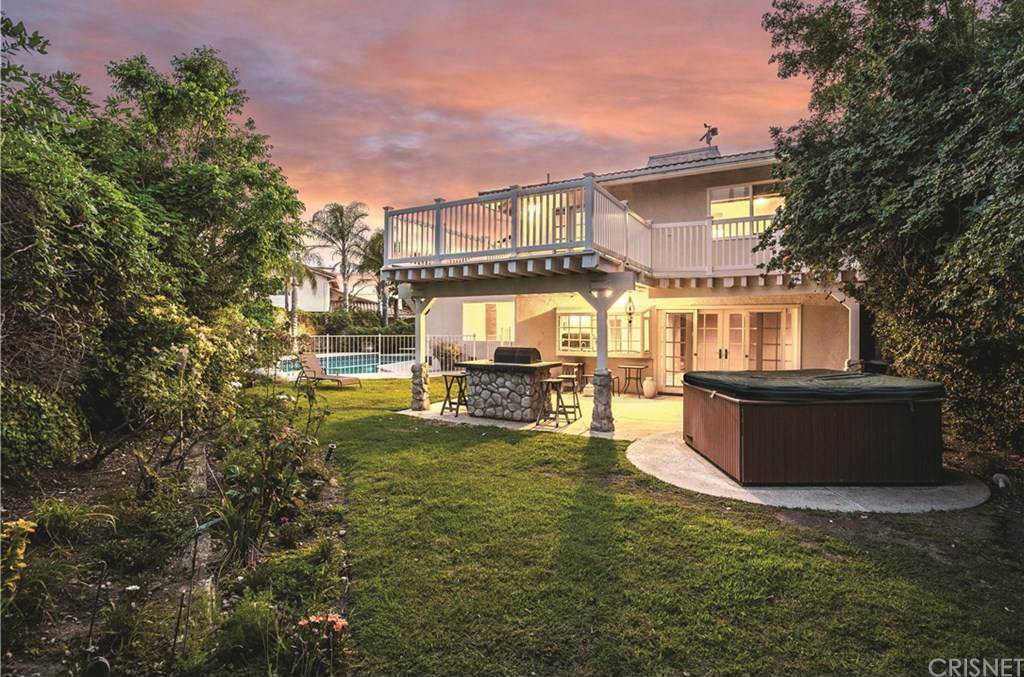 Home for sale in Los Angeles, US (Point2Homes)

Inside, you’ll find vaulted ceilings and walls of glass, while outside, you’ll enjoy serene views, a covered patio, BBQ area, and a swimming pool.

Worth knowing – Porter Ranch is pretty far from downtown, so brace yourself for a 50-minute drive through LA traffic if you fancy a night on the town. 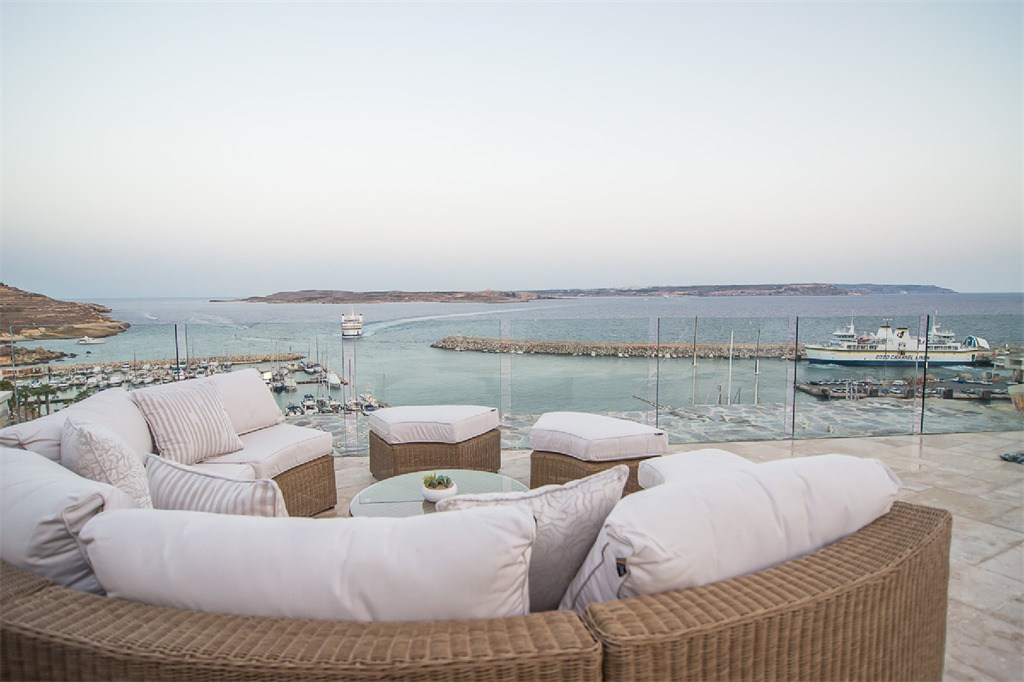 The view from a home for sale in Gozo, Malta (Sotheby’s International)

Inside, you’ll find three bedrooms – two with ensuite bathrooms – as well as a large kitchen, living, and dining area.

Worth knowing – Gozo Island is pretty small. The whole island has a population of only 37,342 people, and covers only 67 sq.km. 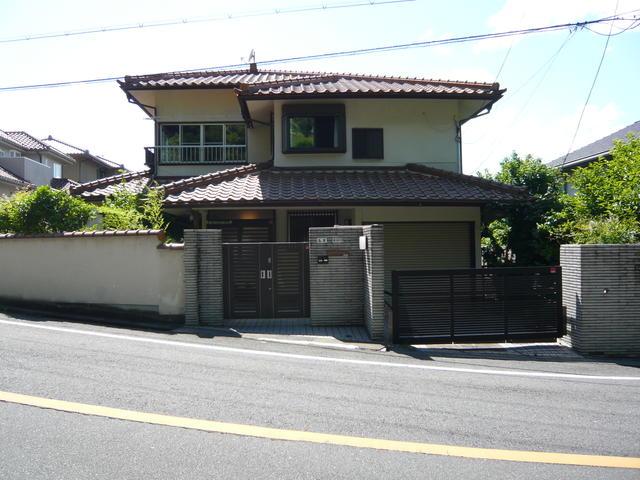 This two-storey home outside Osaka, Japan, has a living area of 1,883 sq.ft., but apart from that, not much is forthcoming from the listing.

Worth knowing – this home is located in Suita, which has a population of 378,000 people, and is a 20-minute drive from downtown Osaka. 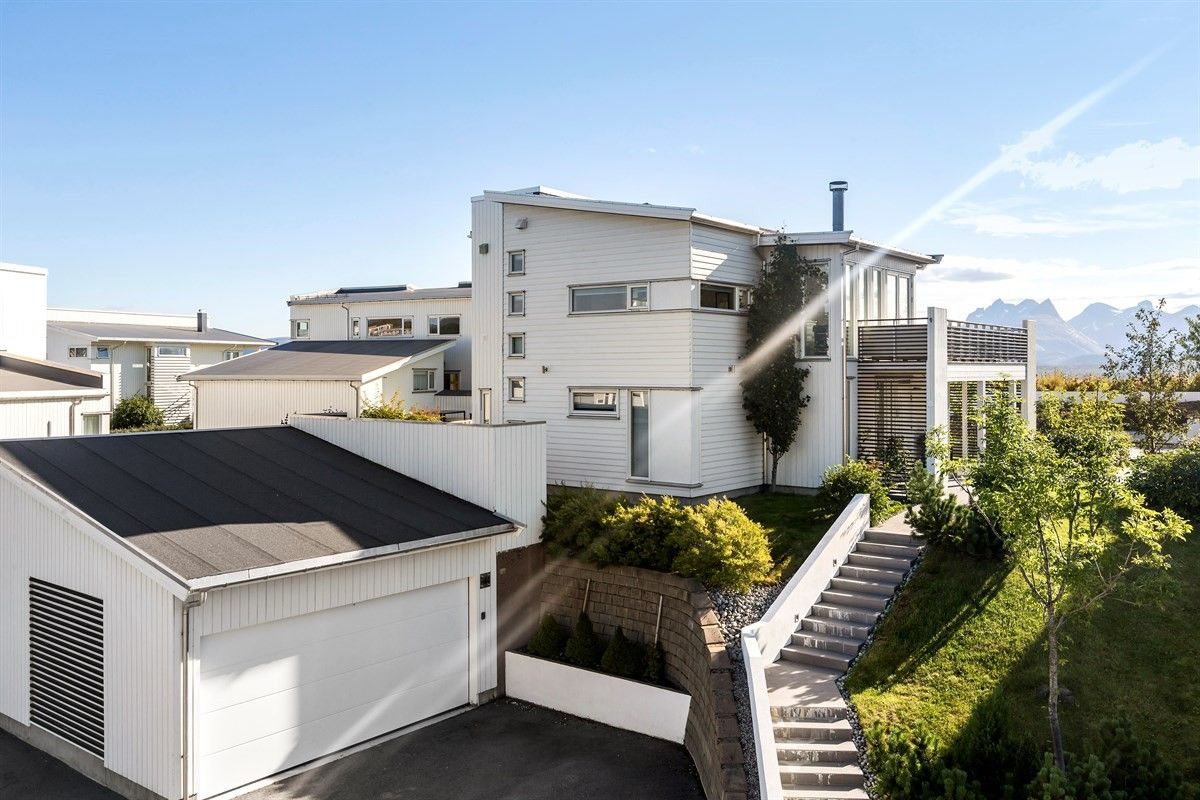 This “distinctive” residence in the small town of Bodø in Norway offers 1,571 sq.ft. of living space, including three bedrooms and two bathrooms.

Worth knowing – Bodø, a small coastal town, has a population of only 51,022 people, and lies just north of the Arctic Circle. 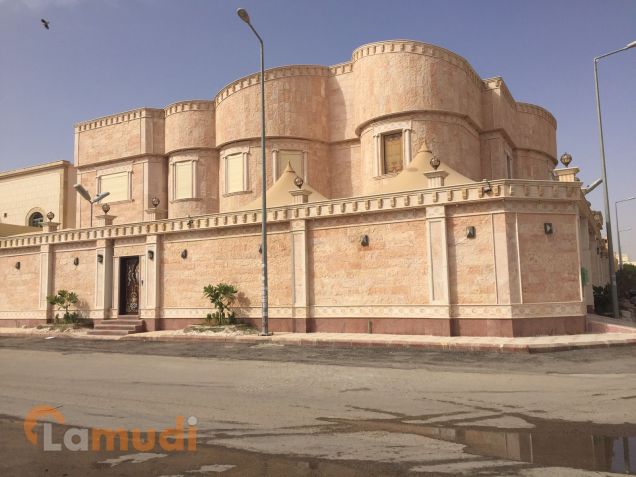 This “luxury villa” in the Ishbilia Compound of Riyadh, Saudi Arabia, offers 5,920 sq.ft. of living space, including five bedrooms and five bathrooms.

The whole palatial villa is fully furnished, and also features a driver’s room, a maid’s room, and of course, much-needed air conditioning.

Worth knowing – Saudi Arabia is an absolute monarchy, ruled under Sharia (Islamic) law, with extremely severe punishments. Women have only recently been allowed to drive there. 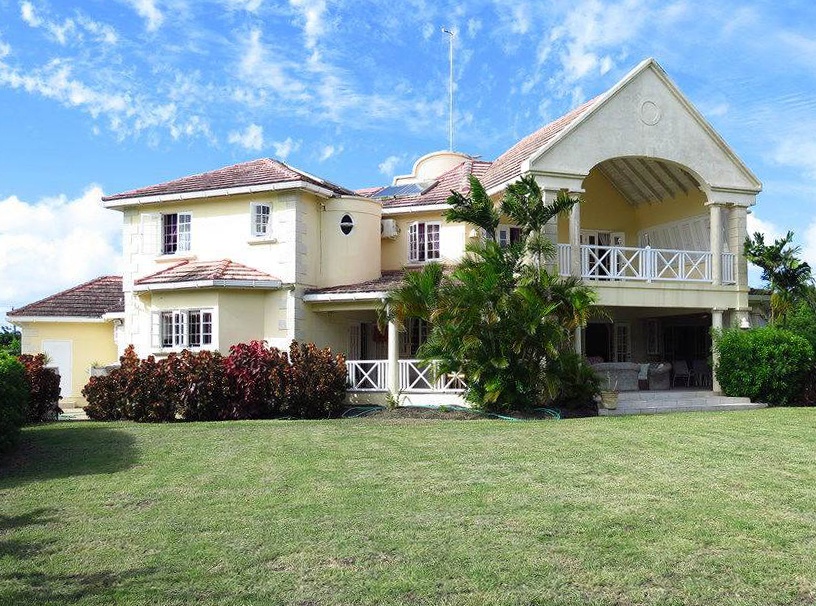 This family home in St. James, on the island of Barbados in the Caribbean, offers 5,000 sq.ft. of living space, including five bedrooms and four bathrooms.

We’re pretty sure you’ll also enjoy a sitting room, dining room, and kitchen that all open to a large covered terrace and the private garden beyond.

Worth knowing – Barbados has a population of just 284,996 people, and beachy St. James is becoming known as a playground for the rich and famous.