Remember when you were five-years-old and watched Sesame Street? Well, fast forward 20 years. The characters of your favourite fictional street are now all grown up: twentysomethings with newly-minted college degrees, full of hopes and dreams, trying to change the world.

There’s Brian, an aspiring comedian; his fiancé, Christmas Eve, a recent immigrant who can’t get a client for her therapy business despite two Masters’ degrees; Rod (think Bert), an uptight Republican investment banker who is deep in denial (and in the closet) about his sexuality; Nicky (think Ernie), his slacker roommate; Trekkie Monster (think Cookie Monster) whose main pursuit in life is jacking off to porn and Kate Monster, an idealistic kindergarten teacher assistant who dreams of creating a special school just for monsters. Oh – and Gary Coleman. The new face on the block is Princeton, (he couldn’t afford the rents from A to P), who is 22, has a B.A. in English, and is ready to change the world and find his purpose in life.

This is Avenue Q. 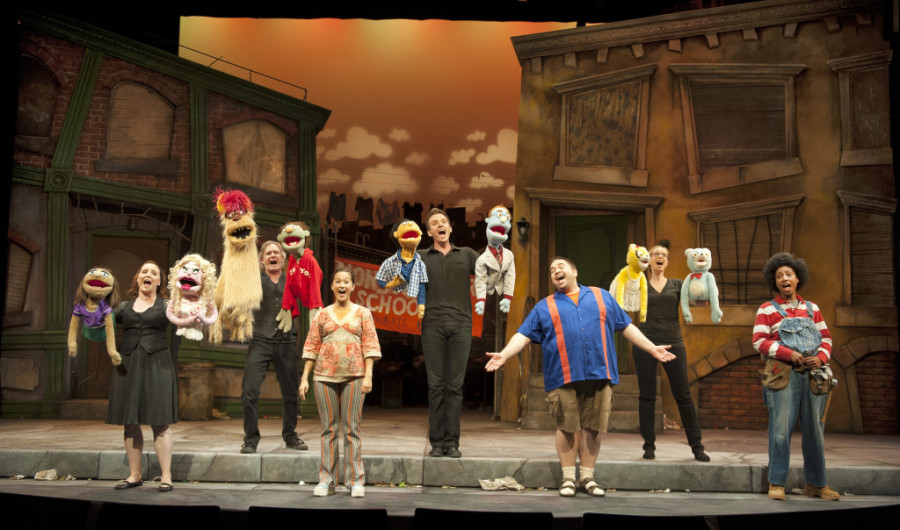 But, like many stories that begin with such hopes and dreams, Princeton’s come crashing down. He loses his job before he even starts, loses Kate Monster, and makes some pretty bad (although normal for 22-year-olds) decisions, thanks to a little help from the “Bad Idea Bears” (who are hilarious). Other characters suffer similar fates: Nicky ends up homeless because Rod kicks him out, and Kate Monster loses her job after sleeping through a really important gig after a drunken debauched night of sex with Princeton. 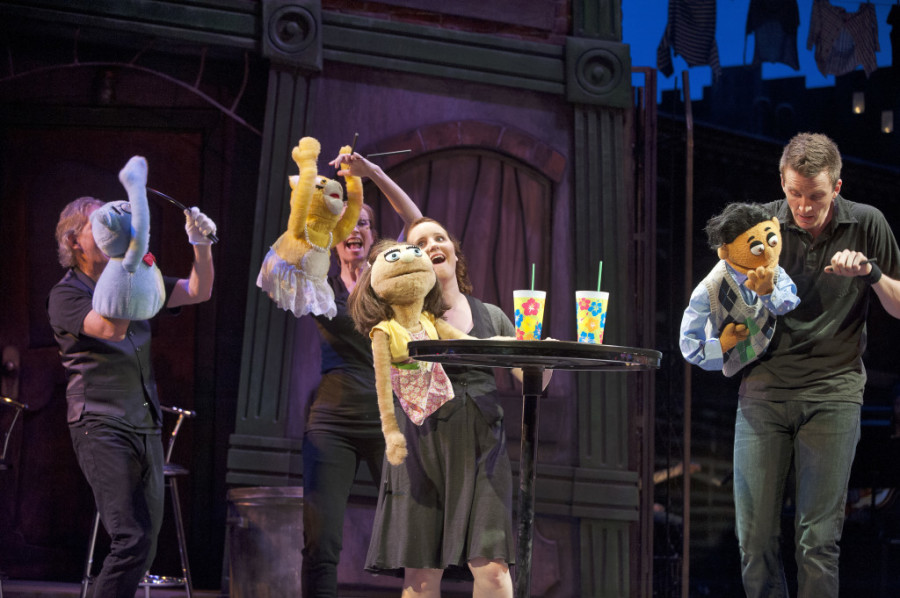 This is not your parent’s musical. Nor is it for your kids. The writers clearly grew up on Sesame Street, and there is no disrespect towards that institution here. Avenue Q, is, rather, an irreverent re-imagining of that idealistic world, the story of a generation that doesn’t seem to be able to get ahead, no matter how hard they try, no matter what their parents told them.

This is an ensemble piece with three actors, 11 puppets and a live band. The acting and singing are strong across the board, although I have to give special props to Scott Bellis whose voice, if I closed my eyes, echoed Ernie and Cookie Monster to a T. I also love Kayla Dunbar in everything she does, but here she plays yin/yang characters of Kate Monster and Lucy with great skill.

This is not a traditional puppet show – the puppeteers are very visible and every bit as much a part of the action. It takes a couple of minutes to get used to this, but then it flows.

The lessons learned from Avenue Q are no less important than the lessons we learned from Sesame Street. When we were five-years-old, it was all about the alphabet, counting and stranger danger. Now, grown-up, it’s more philosophical: this too shall pass.

Don’t stress, relax
Let life roll off your backs
Except for death and paying taxes
Everything in life is only for now

Avenue Q has been held over until the end of August. Go. Laugh. Love. After all, it’s just life.