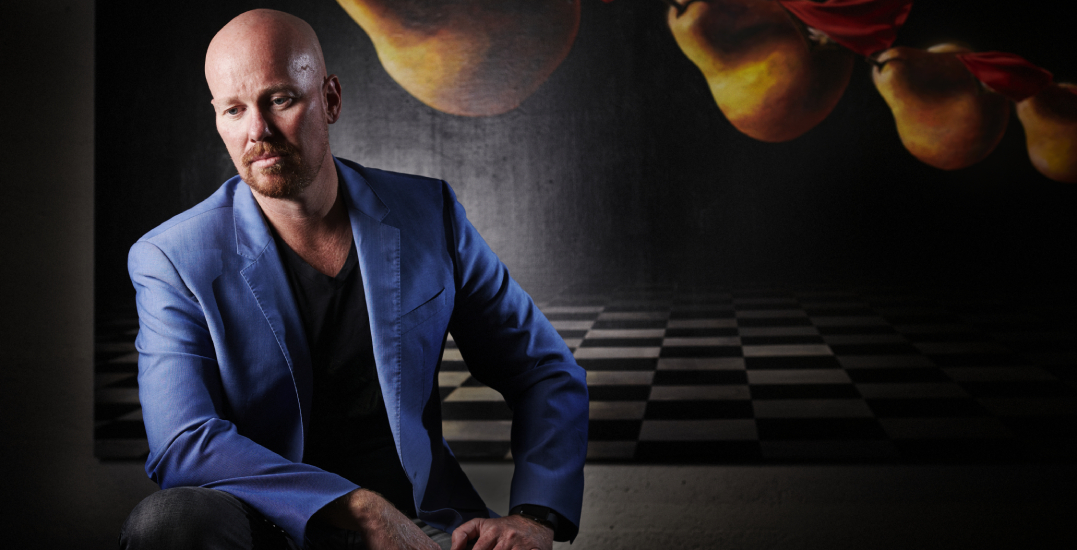 Few artists have made an imprint on the Canadian art world quite like Australian-born, surrealist painter William Higginson.

As far as artists go, much of Higginson’s illustrious career has been defined by its juxtaposes — the periods of invigoration brought on by his brushes with death, his rebellious youth in contrast with his militant adulthood (the artist cultivated much of his discipline and work ethic during his time in the Australian military), his entrepreneurial grit against the backdrop of his sentimental inner artist.

His path to success on the Canadian art scene has been anything but clear cut with the upshot of misadventures and epiphanies — oh, and a lot of elbow grease. When it comes to Higginson, you can leave behind preconceived notions — he isn’t exactly the languishing artist type.

His art, surreal and dreamlike, is just about as conceptual as it gets. Behind each piece is an impressive level of intention and precision. “I love guiding the viewer through these stories as if guiding them through a puzzle,” he tells us. “I can include symbolic messages in a painting that can instantly trigger someone’s memories, emotions, or understanding.”

Testing this for ourselves, we peered online at his piece, Overlooking The Game, and saw a skeletal antler head on a woman’s suit-clad body overlooking a vast, grand canyon-esque landscape. Crouching on a rock from above, as if to be carefully planning her next move, a checkered terrain emerges from the arid earth below her. 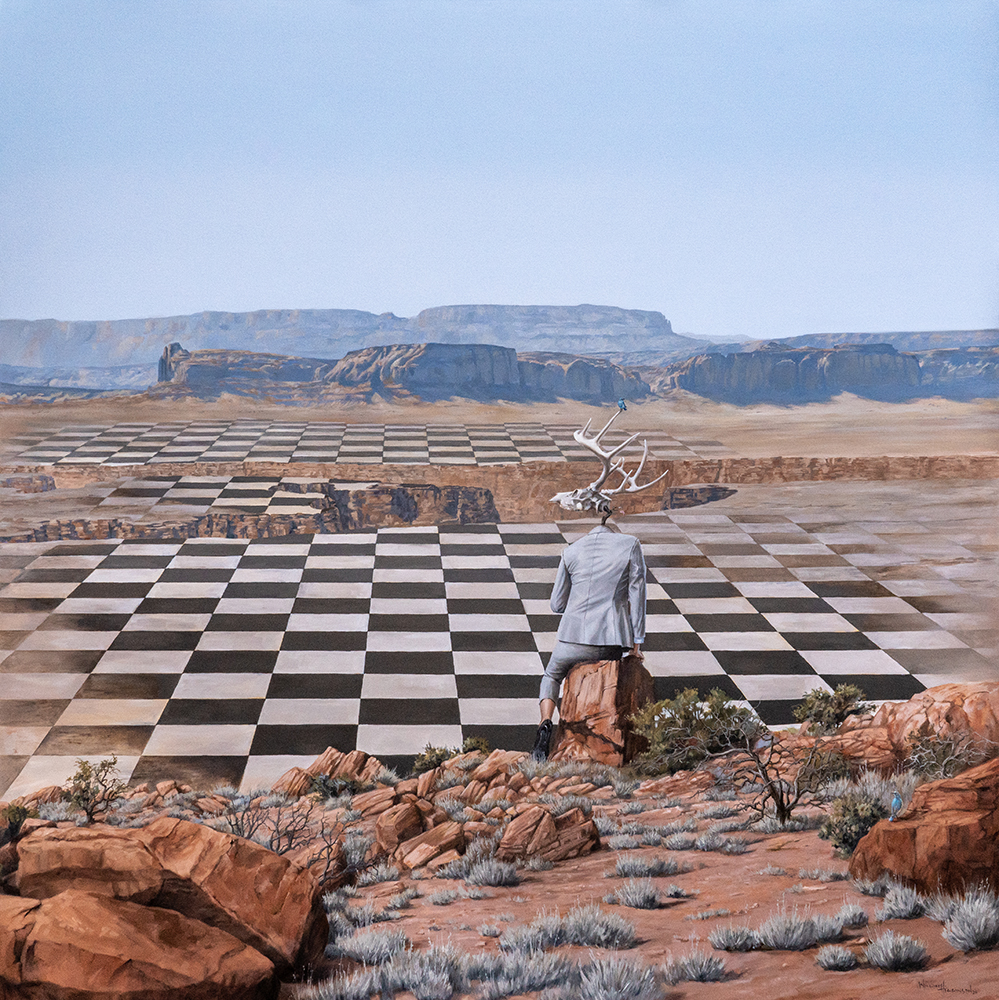 Looking at it, we were overwhelmed first by its infiniteness, overcome with a sense that our lives are mapped out for us. Then, staring more closely at the pattern as it fades into the desert floor, we decided, instead, life is what you make of it. It’s not a story of powerlessness, rather, it’s one of agency — and the paths (daunting as they may be) are limitless.

This, too, is a common thread throughout Higginson’s work: sinister-looking on the surface, but deeply imbued with optimism. It’s just another one of his many juxtaposes.

“I find that my work is like a Rorschach inkblot test,” he says, “the way someone interprets it is usually a reflection of their own inner thought process and outlook on life.” For him, the description of the image is nearly as important as the image itself. It’s not unusual for Higginson to work with professional writers to construct multiple versions of descriptions before one hits the spot.

For Higginson, the flames of passion were stoked from a young age. Stories like escaping sports day in sixth grade to break into his school’s art classroom to paint in secret illustrate that even as a child, his art was beckoning him.

At 11 years old, a close encounter with death only intensified his absorption in the arts. In the aftermath of a leukemia diagnosis that left him in a coma for several days, Higginson remembers only going to school to attend art class. “I would stay in the art room as long as I physically could,” he recollects.

Summoned once again by that inner voice that encouraged him to keep reaching for his paintbrushes, he picked up and left for Vancouver in his 20s in search of a clean slate (or canvas, we should say). Here, he spent his early days selling art on the seawall in Stanley Park and painting anywhere he could set down an easel. It didn’t take long for people to take notice, and within a few months, he’d already begun to make a name for himself.

“I fell in love with the Canadian art scene and more importantly the Canadian people and culture,” he says. “I’d never met such an open and kind community and my growth as an artist instantly accelerated the moment I took my first step in the art world here.”

Before deciding to focus solely on his art, Higginson ingrained himself in the world of entrepreneurship, building Vancouver’s well-known Artbattle and creating one of the world’s first live wedding and event painting companies, Impressions Live Art, alongside his wife (and fellow artist) Olga Rybalko. 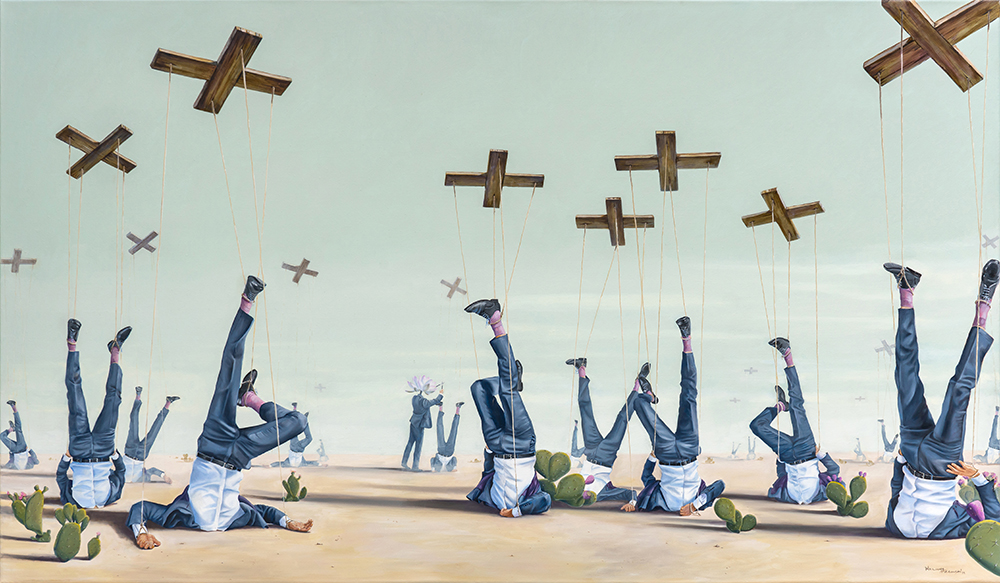 Never one to shy away from hard work (he’s often been referred to as the hardest working artist in Canada), he also founded a tech company aimed at helping other artists around the world launch their own businesses. The entrepreneurial endeavour ultimately became a “roller coaster ride” that took a toll on Higginson’s wellbeing — it’s also one that’s come to inspire so many of his works today.

His 2017 collection, The Peregrine Man, is an artistic iteration of this moment in time, an opportunity to tell a deeper story about the challenges we all face. “The startup experience gave me a clear vision of the story I want to tell,” says Higginson, “and the main character in that story who is always striving to be better and to build a better world around him.”

Within the collection of mesmerizing paintings is his work, Master of Puppets. A crew of abandoned puppets is depicted, their legs suspended from above as their heads remain buried in the sand. What does it all mean? As is often the case with Higginson’s work, the answers seem to be carefully rooted in the ancient mythologies and literature he continues to find relevance in today.

The same can be said of his piece Zero Game For Some, which is entrenched in Greek mythology. The painting portrays a group of suits with poppies for heads — one of whom is markedly taller than the rest.

A metaphor for standing out from the crowd, the piece wills us to pay attention to those who help us grow instead of those who undercut us. “My process is labourious from building models to researching history and mythology to come up with a concept that is aimed directly at my viewers’ hearts and minds.” 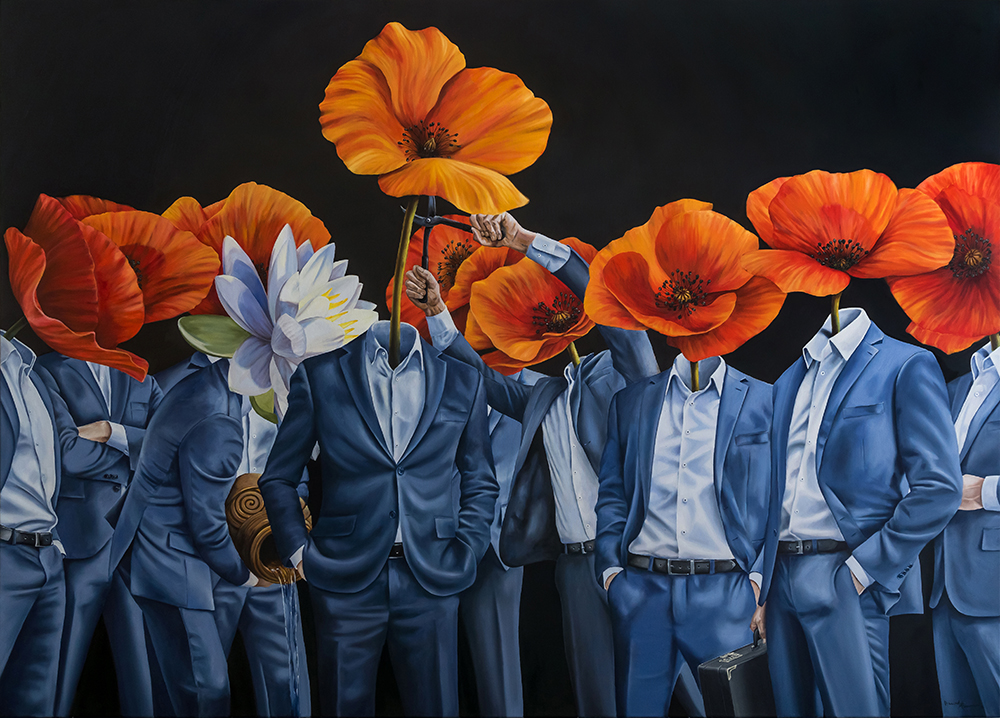 Zero Game For Some (William Higginson)

His decision to fully thrust himself into his art is one that has paid off. His newest collection was publically acclaimed, nearly every piece selling from off the wall. But, for Higginson, the real “highlight of his life” was seeing his work next to his childhood hero, Salvador Dali’s.

After following his work for as long as he could remember, in 2019, Higginson was invited to showcase his work alongside a collection of Dali’s — an experience the artist remains dumbfounded by today.

But, “apart from the show with Dali in 2019,” he points out, “I am a very independent artist and my connection with my fans is more important to me than anything else in this world.”

His social media presence offers his supporters a glimpse behind the scenes of his meticulous artistic process, his feed acting as a kind of art gallery within itself — brimming with samples of his latest art, sources of inspiration, sketches, models, and experimentations with new mediums. 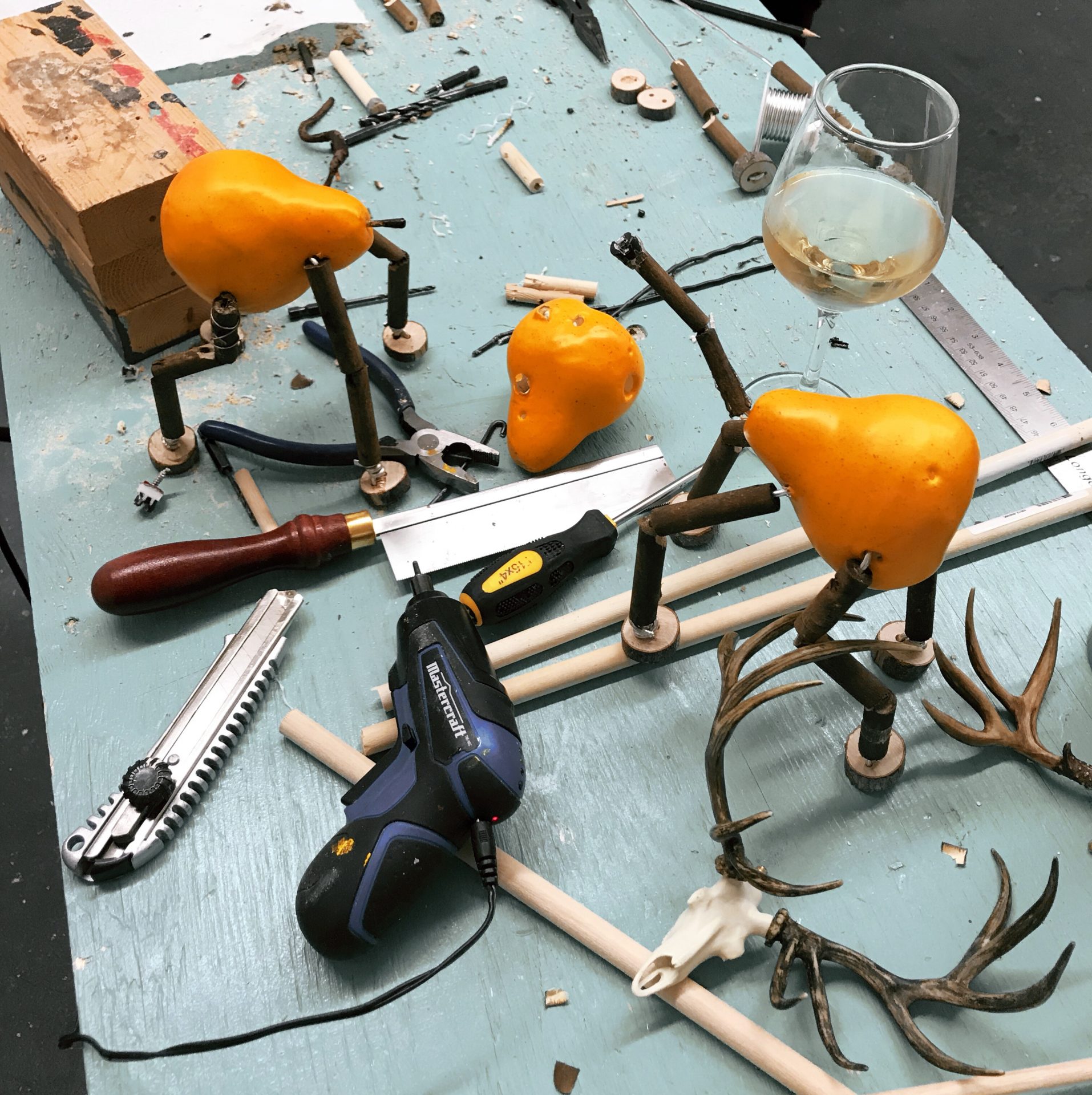 In many ways, this “mad scientist” approach is the essence of what shapes him as an artist. An integral part of being an “effective surrealist,” model-making is an initial step that helps him capture dimension within his paintings.

A prominently featured piece (and his favourite work of all time) is Swallow The Sun. One of the most wonderful things about art is its ability to transport us, and this piece, which was created and released during COVID-19 lockdowns, struck a chord among his followers.

Standing jubilantly atop a mass of mossy ruins, the sunflower girl is on her tiptoes, her arms extended as if to be embracing the untamed wind. Floating above the clouds, she’s unshackled — she seems joyous and hopeful.

“The reaction this piece got was beyond anything I could have imagined,” says Higginson. “It changed people — made them feel free and happy. I was able to portray a sense of freedom that really hit home.” 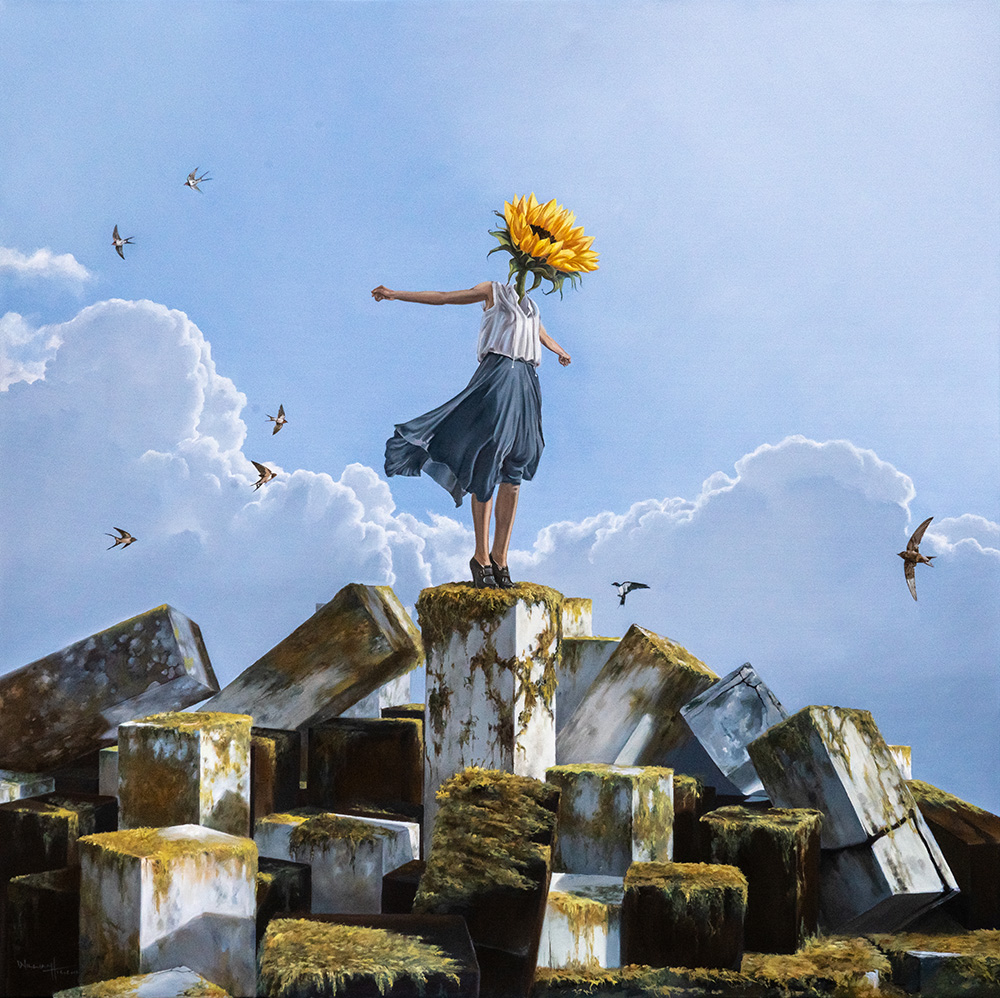 Right now, the master surrealist is looking forward to exploring all the different ways the current pandemic and its impact on human nature will continue to shape his work. When we pressed him for his next career goal post, “if I had to dream big, I would love to spend a full year on creating one massive canvas with a grand vision.”

For more of Higginson’s works, straight to your inbox, you can visit williamhigginson.com to subscribe to his newsletter. He doesn’t email often, we’ve been told, but when he does, it’s loaded with juicy content.