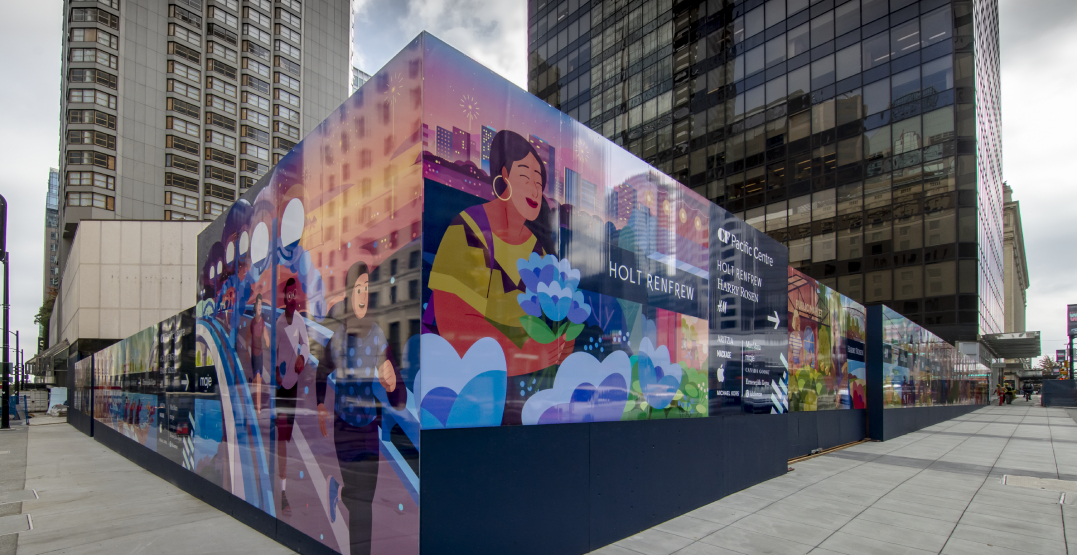 The power of art when it comes to positively impacting and reshaping public spaces is something the team at CF Pacific Centre holds close. In the hopes of creating a sense of belonging in the communities it serves, they were inspired to issue a call to local artists earlier this year for a commissioned mural that would embellish Vancouver’s iconic retail centre.

The theme of the art piece was “Transforming Communities for a Vibrant Tomorrow,” and local artists were encouraged to submit their ideas.

Once the site of the landmark glass rotunda, across from the Vancouver Art Gallery, the novel hoarding wall mural allows the space to remain vibrant and stimulating for the community, which is currently under development as part of an expansion. 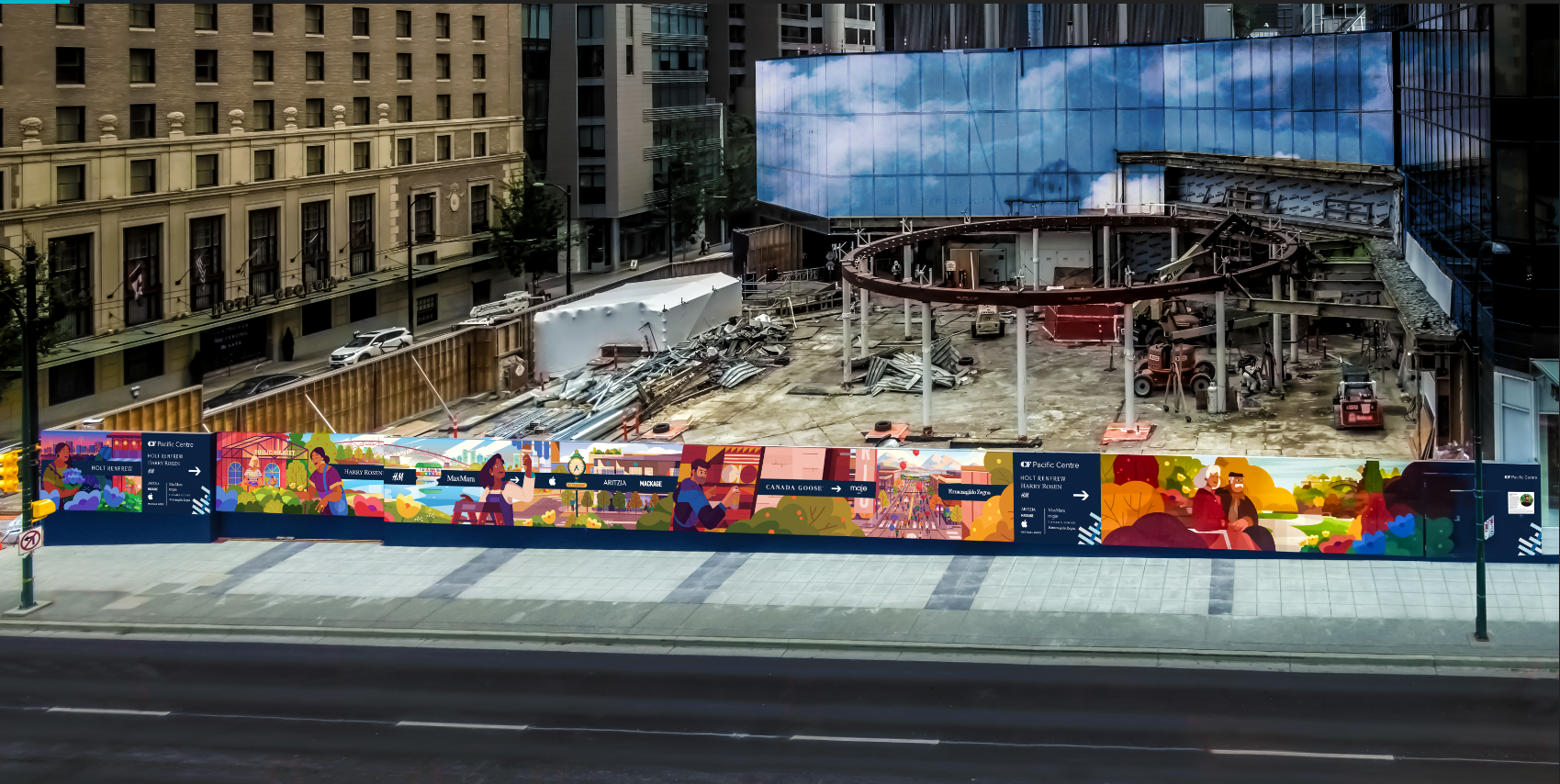 We recently caught up with Mayani, the local visionary behind the commission, to learn more about this special partnership, his source of inspiration, and the effect he hopes the mural will have on the surrounding community.

Mayani considers himself fortunate to have grown up in both Mexico and Canada and has drawn inspiration from both places: the vibrant colours and shapes of Mexico and the natural beauty of Canada’s landscapes, infusing both cultures to create an animated display.

After studying in both Mexico and abroad in Spain, he settled into his career as an illustrator and started a family of his own here in Vancouver. The creation of the mural coincided with the birth of his first child — making the project all the more personal for him.

On this subject, he mentions the universality of art and its ability to speak to everyone — even children. Equally powerful is art’s ability to foster community. “I feel like right now, art is playing a very important role in how we represent diversity and show inclusion,” he says. 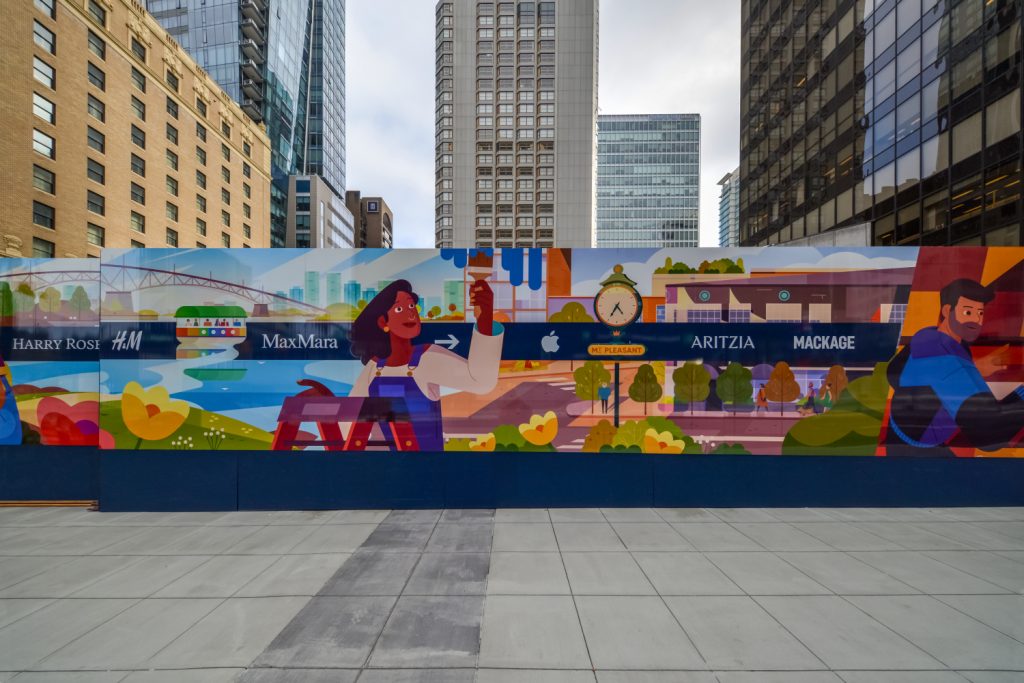 Throughout the process of developing the mural, Mayani took great care to ensure the piece would do justice to the landmark and convey a sense of optimism to onlookers. “I wanted this to be well received [and] have a positive impact on the space,” says Mayani.

Though he nearly scrapped his initial concept, today he feels “really happy” with how it turned out and is excited for others to experience it. He hopes that the mural inspires others, the way many of Vancouver’s other murals inspire him to “see how other people look at the world.”

He likens walking through some of the city’s mural-covered areas, like Mount Pleasant, as being akin to “walking through a gallery.” For him, local events like the Vancouver Mural Festival are an opportunity for people to come together. Murals altogether, he believes, are something that “makes our neighbourhoods feel more alive.”

Passionate about creating more vivacious and invigorating communities through art, the mural at CF Pacific Centre is a testament to the company’s commitment to supporting Canadian-based artists. Through its partnerships with a wide range of local artists, the company hopes to forge a sense of belonging that is accessible to all who live, work, dine, and visit its properties. 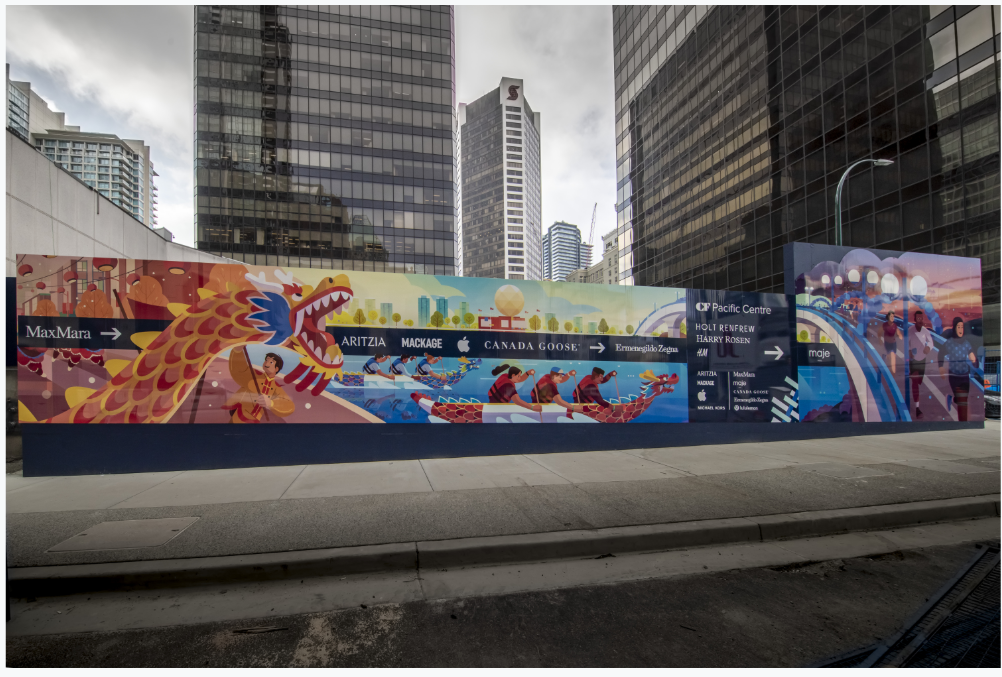 When working with the CF team, Mayani was encouraged by the extent to which they were open to his ideas without constraint. “It really felt like they were just letting me do whatever I wanted and it was great,” he expresses regarding the partnership.

Above all, Mayani wants the community to see itself reflected back within the mural in a way that makes them proud of their city. “Hopefully they see how beautiful the city is through this mural,” he says.

You can come visit the new mural at CF Pacific Centre today to see how it celebrates the city’s vibrant and diverse culture through the eyes of this local talent. If that isn’t heartwarming enough, see if you can spot Mayani’s personal touch — a tribute to his growing family — within the expansive mural.