An artist is nothing without a canvas. And to Sandy and Steve Pell of Pellvetica, anything can be a canvas.

The Pells have been responsible for some of the most talked about and iconic murals in the city. Together for the past 15 years, the two life-long creatives got their start in the world of murals while living in a loft apartment in Kitchener, Ontario.

“[It] had just stark white walls, and Steve had this great idea to put this… funky wallpaper for our space, but when we did an estimate on cost it was going to be about $450,” says Sandy. “So we decided to pool our efforts together and paint this wall, which ended up getting featured in the local newspaper and got our mural career started – which was fun, and unplanned.”

Relocating to Vancouver, Pellvetica’s next big opportunity came when Hootsuite – where Sandy works as Corporate Communications Manager – was getting ready to move into their Mount Pleasant Headquarters. Submitting proposals for murals, Hootsuite picked a now-famous design called “Owl Eyes.” The idea for the project came after an unlikely welcome after moving to Vancouver. 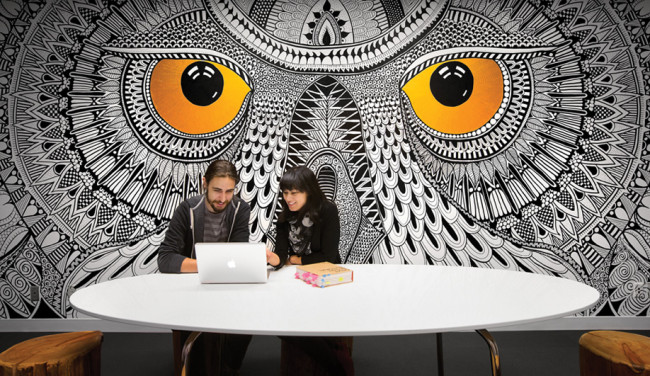 “After moving to Vancouver from Toronto, we were on a walk together in Stanley Park, and we came across a Great Horned Owl perched on a tree literally five feet away,” says Sandy. “The owl was staring at us with the most intense golden yellow eyes we have ever seen.”

The mural was a hit, spawning a variety of merchandise and iconography at Hootsuite.

“They loved it, and immediately we noticed a huge correlation between people booking the board rooms that had paintings in them,” she says. “So we put together some proposals to do three more at Hootsuite.”

When it comes to the daunting task of putting together a mural like “Owl Eyes,” Sandy says the process of the mural is comparable to their process as artists: an “evolving organic process with an apparent underlying order.” Once a design is completed – digitally or by hand – it is projected onto the surface, which the Pells then paint over. Anything from the placement of wall outlets, to the colour of the ceiling, to the perspective of the viewer upon entering the room can affect how a mural turns out. 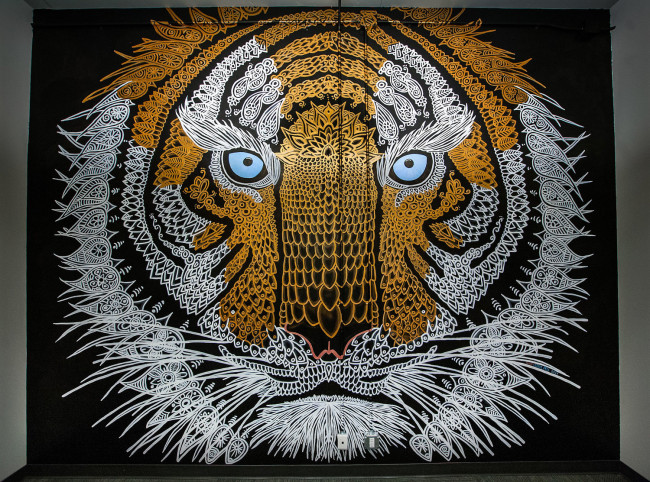 “Each design constantly changes and evolves throughout the mural’s lifecycle which develops the fly because we design using an agile and iterative process much like you might find at modern tech companies,” says Sandy. “This allows for us to adapt to any design challenge while working efficiently and quickly so that we focus on aspects that matter most; solving the numerous problems we encounter.”

Working as a team, what is most important to the Pells is that they are able to create something together, that will hopefully last into future generations.

“What we love most, and what’s most important to us, is creating something together through the experience of art,” she says. “We have complimentary skill sets that do overlap, but we work to master and focus on what we do best. We conceptualize our works together, then the work will bounce between us until it’s polished and ready for application to the wall. At this point, we paint the aspects of the mural that we are best at.”

Now, with murals completed for companies like Mobify, Skevik Skis, Fusion Projects, Allocadia, and xMatters Inc., Pellvetica has many exciting projects in the future. Sandys says as long as they’re creating together that’s what matters most.

“Murals communicate varying emotions to varying people and we learn a lot about them and ourselves that way. Complex patterns can overwhelm your senses, dazzle the imagination, and spark new connections,” she says. “At the end of the day, we paint murals to evolve together and to live life doing what we love: spending time together, and creating beautiful art.”