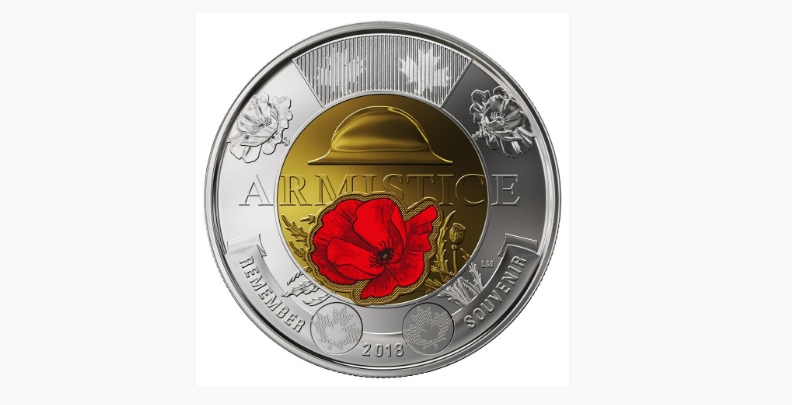 Canada has a new toonie.

In keeping with the tradition of issuing coins remembering the sacrifices of Canadians who served with the military, the Royal Canadian Mint has issued a two-dollar circulation coin that commemorates the 100th anniversary of the end of the First World War.

The coin recalls the signing of the historic peace treaty on November 11, 1918 and was unveiled at the Mint’s Winnipeg facility on Monday.

Designed by Canadian artist Laurie McGaw, the reverse of the coin depicts an important pairing of two symbols of remembrance. The inner core features a soldier’s “Brodie” helmet which represents a solemn reminder of the many lives lost during the war. Below the helmet lies a large poppy, the official bloom of remembrance inspired by the Canadian poem, “In Flanders Fields.”

Two more poppies are engraved on the outer ring of the coin which includes the banner bearing the bilingual words “Remember,” “Souvenir,” and the year “2018.”

“For a nation of eight million people, Canada’s efforts in the First World War were remarkable. More than 650,000 Canadian men and women served in uniform during the First World War, with more than 12,000 comrades from Newfoundland and Labrador also answering the call to arms,” said the Honourable Bill Morneau, Minister of Finance. “By issuing a circulation coin honouring the 100th anniversary of the Armistice, the Mint is helping to preserve the memory of all Canadian veterans, who continue to remind us that peace and freedom are worth fighting for, even at great personal costs.”

The reverse side of the coin features Her Majesty Queen Elizabeth, designed by Canadian artist Susanna Blunt in 2003.

Limited to a mintage of three million coins, two million selectively coloured and one million unpainted, the two dollar collector’s coin in now in general circulation and will soon be available through public coin exchange.

The coloured version of the toonie is also available in a special wrap roll of 25 two-dollar coins, half of which are painted with the scarlet poppy, for $79.95.