Canadian rockers Arkells are back in Vancouver tonight for the first of two highly anticipated shows at the Commodore Ballroom.

It’s been a great couple of years for the Ontario quintet. They released their third studio album “High Noon” to rave reviews in 2014 and the album’s first single immediately shot to the top of the Canadian Alternative Music chart. High Noon took home the “Best Rock Album” prize at last year’s JUNO Awards and won the coveted “Group of the Year” trophy for the second time.

Arkells, named after a street in Hamilton where the guys used to rehearse, have an incredibly loyal fanbase – their videos have been viewed more than three million times on Vevo. The love affair is clearly mutual as the band is notorious for surprising their fans with things like signed postcards or free downloads at Christmas.

Last week, when the band learned that fans who couldn’t score tickets to their sold-out Calgary concerts were travelling to Edmonton to catch a show, they sent custom-made mixed CDs to those fans for the three hour drive.

A handful of tickets are still available for both Vancouver shows here. And if the setlist below is any indication, Arkells have an epic night in store for us. Be sure to check out our photos and review of the concert on Tuesday. 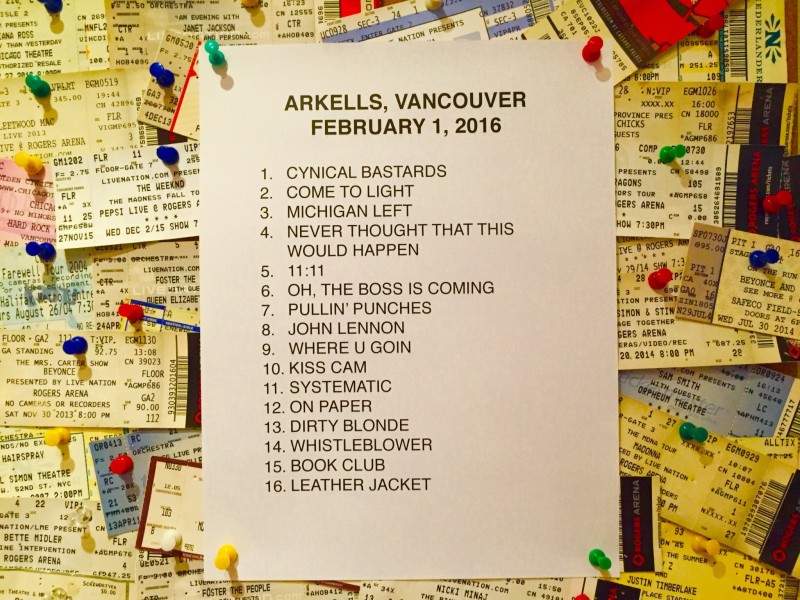