Vancouver, when it comes to getting a deal, you’re nuts.

People have been lining up since yesterday evening for the Aritzia Warehouse Sale at the Convention Centre near Canada Place. Keep in mind that the doors didn’t open until today, September 3 at 7 a.m.

Lineups are stretching as long as a kilometre to catch amazing deals on the normally pricey clothes.

Discounts are up to 90% off of the original tag. Yowza.

At least the discount fashionistas seem to be fairly calm and collected – there doesn’t appear to be any pushing or shoving (at least according to Instagram), but as one Twitter user pointed out, it’s probably safer to line up properly.

At 7 am the @ARITZIA warehouse sale line was a km long. I almost cut in, but feared being stabbed to death w/ stiletto of teen fashionista.

We’re wondering, though: don’t these people have jobs? At any rate, here are 11 photos of the Aritzia Warehouse Sale at the Vancouver Convention Centre:

$707.00 later, my work here is done..! ’til tomorrow when @aritzia refreshes all of the goodies for their annual warehouse sale! #aritziawarehousesale #moneyCANbuyhappiness #confessionsofashopaholic #whatannaboughtnext #shopping #aritzia #clothing #helpmeimpoor A photo posted by Anna Blackledge (@anna.b.88) on Sep 2, 2015 at 10:17pm PDT

Anyone coming to try their luck tomorrow? The scent of blood and bargains is in the air! #aritziawarehousesale pic.twitter.com/uZeJYS0pca

If they weren’t sleeping on the ground to be the first ones at the sale, many (more reasonable) people had been waiting in line for an hour and a half or more. 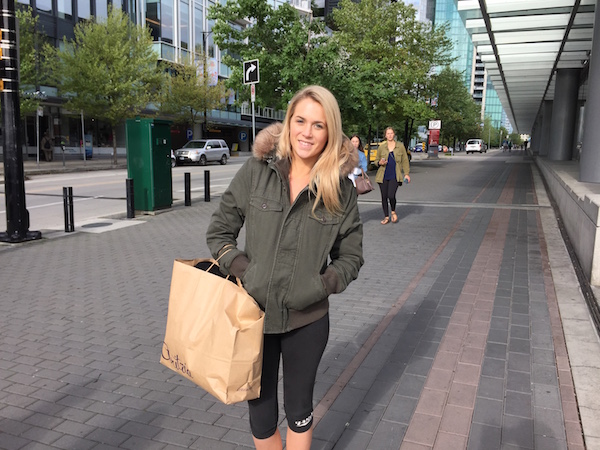 Jessica did the sale last year and knew what to expect. She said she spent about an hour and a half in the trenches, but when we spoke to her outside the convention centre, she had been waiting for her friends for over an hour.

When asked if the crowds were civil, she said she was the pushy one.

Make no mistake though, these ladies will make sure you play by the rules, or they will call you out on social media: