The Canadian Pacific Railway (CP Rail) has indicated that trains could once again run on the Arbutus Corridor, a 11 km long rail corridor that was deactivated in 2001.

The company recently sent a notice to residents living along the Corridor that it is clearing intrusive greenery on the right-of-way to ensure that trains have a clear passage to move along the rail line.

“For many years now, CP has been involved in conversations to convert the Arbutus Corridor for a number of combined public uses, such as a greenway, public transportation, community gardens and Eco Density development,” says the notice. “Despite our efforts, the company and other parties have been unable to achieve a plan for the disposition of this valuable asset.”

“As a result, as with any asset, the company must look at optimizing its use. This includes running CP trains which require the tracks to meet specific safety requirements. CP’s current activity along the Corridor will enable our engineering services team to quickly make any necessary repairs to this line so trains may pass.”

In recent years, the Corridor has become a popular route for runners, cyclists and dog walkers. Community gardens have also popped up and vegetation that produces berries flourished since the Corridor’s last trains, making it a popular place for summertime berry pickers. However, CP Rail discourages this, saying the 66-foot wide right-of-way is privately-owned property and that it does not allow “non-railway persons to access this land.”

The Arbutus Corridor was given to CP Rail in 1886 and the first rail line was built in 1902 to move cargo and passenger trains. For a century, it connected seamlessly with the company’s other rail right-of-way assets along the Fraser River and Steveston.

In 1999, train operations on the Corridor were limited to serving the Molson brewery while the company began plans to redevelop the land into a mix of residential and commercial usages.

However, in 2006, the City of Vancouver successfully fought against any development on the Corridor after the Supreme Court of Canada upheld a previous municipal bylaw that restricted the right-of-way’s use to a greenway and car-free transportation corridor.

In addition to calls for turning the right-of-way into a permanent greenway, there have been proposals to use the Arbutus Corridor for rail transit service. This was a route considered for the SkyTrain Canada Line and the municipal government also discussed using the rail right-of-way for a streetcar service. 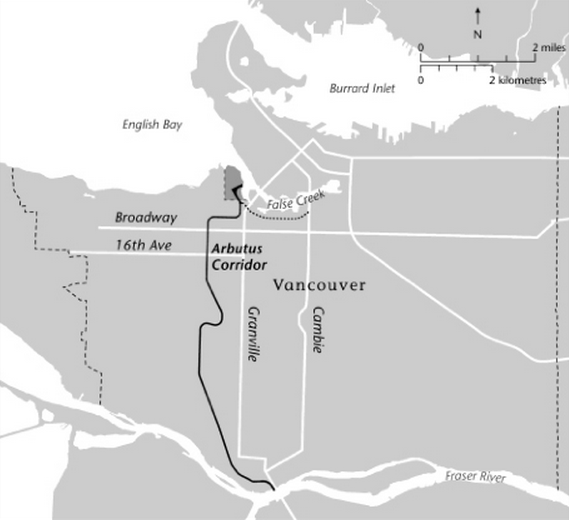