When a loss by your team brings with it excitement each time, something’s a little off.

Every time Vancouver lost in the first three months of the current NHL season, fans couldn’t help but feel hopeful. Not for the team – they were still worried about their Canucks – but these were the comments you’d read on Twitter:

Tortorella’s going to tear the team a new one tonight.

Facing the gauntlet, Tortorella has been thoughtful, gracious and calm every single time, even under extreme pressure.

He’s been charismatic and disarming too.

Yesterday, asked if he thinks Alex Burrows has a future in broadcasting, perhaps with TSN, Tortorella quipped:

“Those guys on the panel really don’t get it. I don’t think that would be a spot for him to go. Tell the boys at TSN I said that too.”

The room full of journalists LOL’d – Torts had them in the palm of his hands once again.

Aside: the guys at TSN had a funny response.

But his reinvented public persona – was it all encompassing, or was it just a mask?

We should have known no matter how many times you repeat “serenity now,” which is what the Commuter Coach must’ve been doing during his drives to and from the rink each day, at some point that bottled up emotion will spill over. (One of the many lessons we’ve learned from Seinfeld)

All it took was a nemesis from his past to release the valve.

Bob Hartley and the Calgary Flames came to town on January 18 , and when Hartley decided to make the game personal by starting five goons, Tortorella couldn’t resist doing the same. Mount Torts erupted that night when the Vancouver coach stormed Calgary’s dressing room, and we had our answer then – the real Torts was alive and kicking (and nearly punching, too).

Behind the scenes, he never changed. Tortorella has always needed the drama.

I bring this up today because we are turning the page on March 2014 – one of the most tumultuous months in Canucks history.

Thirty days ago, Tortorella couldn’t resist but bring another goaltending controversy to a market that had no appetite and no need for it. Canucks fans had finally accepted Roberto Luongo as their number one guy, through sickness and in health, for better or worse, till death did them apart (that, or his 12 year contract).

Tortorella got his starting goalie to demand a trade, and he further demoralized a team already exhausted by his methods. Over the next two weeks, Vancouver suffered catastrophic losses to Phoenix, Dallas and then, of all teams, to the New York Islanders.

Behind the scenes, Torts was bringing drama all year long with Zack Kassian, David Booth, Jason Garrison and others – players whose skills could’ve been more effectively deployed and better utilized were being stapled to the bench.

Yesterday, David Booth said on the Team 1040 that Tortorella calls players out publicly all the time, and Booth thinks his comments are misunderstood. It sounded like a subordinate trying to stay in his boss’s good books because he has little choice.

But Ryan Kesler, who knows he’s playing at least 21 minutes a night no matter what he says, went rogue on his coach, without mentioning his name once. Instead, he talked about how great Alain Vigneault was (from the Province):

“It wasn’t just him. It was his assistants, too. We had a good power play and penalty kill and he did a great job of giving us the room. We had a team where we were very deep up front. We played the right way — like he used to say — and we dominated teams.”

Reading between the lines, Kesler was saying the above is exactly what the Canucks don’t have right now.

All this to say Tortorella’s the same drama queen who had all those TSN highlight-reel fights Larry Brooks in New York over the past five years. Only now the issues have been shifted to him and his players.

So as we turn the page on March and the Canucks have half a month’s worth of games left, we hope to be turning the page on John Tortorella’s time in Vancouver in just a few weeks time.

And that is how I introduce April’s Canucks wallpaper. 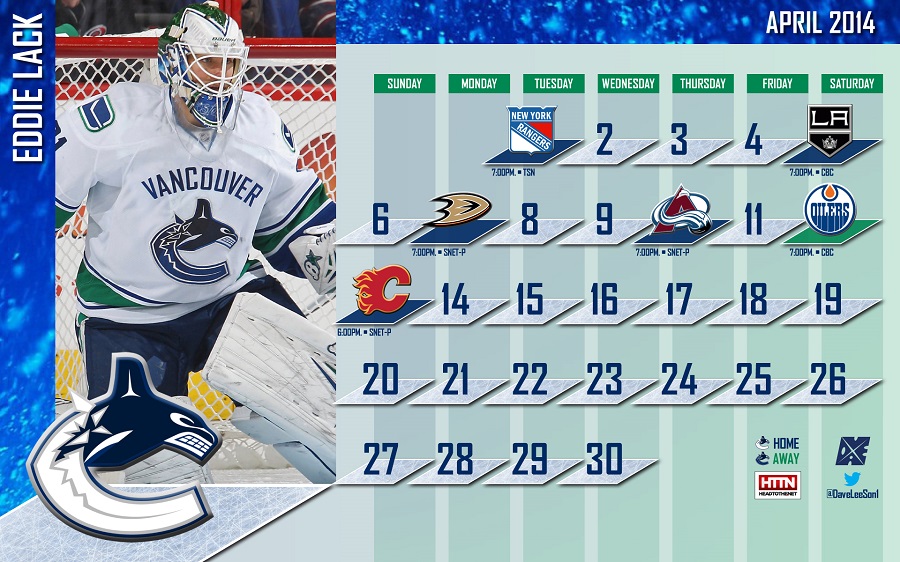