Shania Twain debuted her Rock This Country Tour this week in Vancouver, but so much of the local and international media did not lead into their stories by noting her vocal talent or career success. Instead, the focus was on Twain’s new hair colour, her flashy costumes and those thigh-high boots.

It’s not something you may have taken issue with, or even noticed, but it is a clear indication of how women, especially famous women, are represented in the media.

Yes, Twain’s new hair is a somewhat “shocking” change. She has always been a brunette, and now, well, she is blonde. Knowing celebrity hair trends, it is likely she will switch back to a different colour in only a matter of time, but that didn’t stop media outlets from emphasizing the new look in almost every account of her Sunday night tour stop in Vancouver and Friday’s show in Seattle.

Few mentioned Twain is the top-selling female country artist of all time and the sixth top-selling female artist ever. Her net-worth of $350 million ranks her as one of the richest singers in the world, even richer than legendary Barbara Streisand. Her 1997 album Come on Over sold 39 million copies, more than The Eagles’ Hotel California and The Beatles’ 1, and remains the best-selling studio album ever by a female.

Compare that to the same paper’s review of the Vancouver U2 concert: not one single mention of Bono or any other band-member’s appearance, even though the lead singer also revealed new blonde locks that night.

Though we hardly expected anything better from the entertainment outlets like E! Online, their headline wasn’t to be missed.

The site then went on to describe Twain’s “blond hair and her sexiest onstage looks yet” while only focusing on the star’s concert appearance. What songs did she play? Who cares! She “delighted the crowd by kicking up her legs enthusiastically” and “wore a black and metallic bodysuit that showed off her amazing figure.” That’s all that really matters, right?

The Times of India, one of India’s major news sources, reported the story with a similar angle, saying: “The singer debuted her blonde hair wearing black thigh-high boots with fishnet stockings and a sparkly red dress, along with red glasses.” Then, rather ironically, they added: “While some may have disliked Shania’s new look, others came out in full support. ‘I don’t care what anyone’s got to say about Shania’s new look, she’s so hot.’”

Even after visiting a Surrey elementary school to launch the West Coast’s first Shania Kids Can Club to empower children to reach success, some local media took no time to mention how she looked while announcing this milestone.

But it was Facebook where the media really emphasized the singer’s appearance.

93.7 JRfm posted a picture of Twain’s blonde hair, writing “Shania Twain went BLONDE! Still a babe tho. You’ll get the first look at it TOMORROW when she hits the stage at Rogers Arena.” 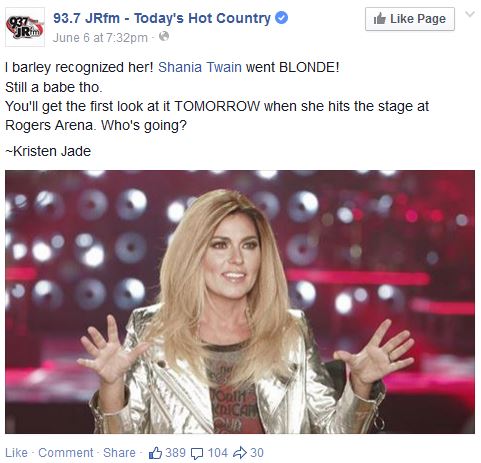 Just a quick question – do we have to pay anything extra to see the blonde hair or is that included in the ticket price? Asking for a friend.

An American radio station also emphasized how “hot” Twain looked while kicking off her tour. 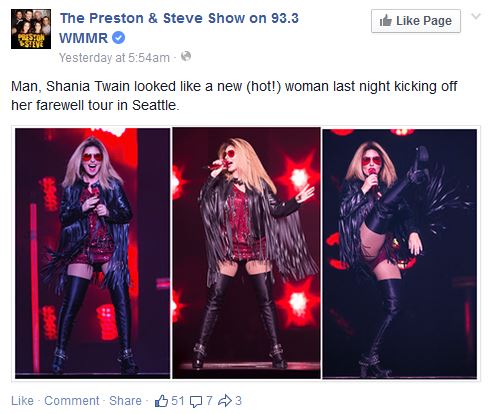 Another U.S. radio station linked to a quality Rolling Stone review of the concert, but their only take-away from the story was – again – the blonde hair. 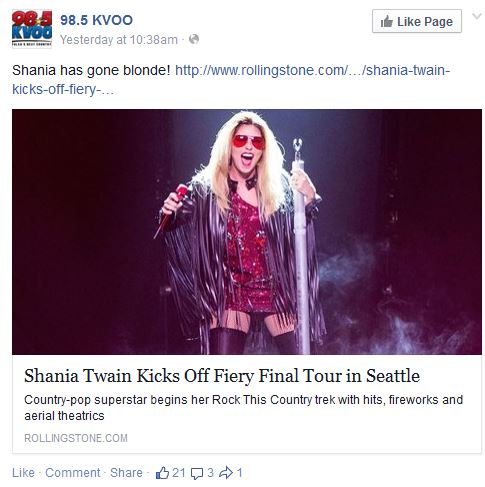 And the Jeff O’Neil Show on CFOX wants to know if Twain is the hottest Canadian. 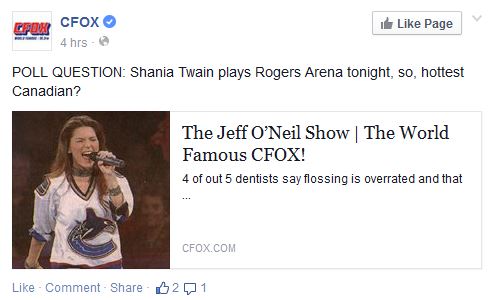 Some might be asking ‘so what?’ People talk about appearances, particularly female appearances, all the time. Hell, it is often women that ogle at other women, noting their breast size, thigh gap, hair colour. But this only happens because as a society, we are trained to value women first for their appearance.

Miss Representation, a documentary film and online project bringing awareness to how women are treated in the media notes that women are more commonly introduced or noted for their looks rather than their accomplishments, character or voice.

Take, for example, the sports reporter who asked Eugenie Bouchard to twirl for the camera after crushing her opponent in the Australian Open.

Or Sarah Palin, a Vice Presidential candidate – suitability aside – was simplified into a sexy ditz in the media.

And Vancouver’s own Kristi Gordon, meteorologist at Global BC, was recently criticized for not hiding her pregnant body on TV. It would be hard to imagine the same controversy happening over a man with a big pot belly hanging over his belt.

Even Caitlyn Jenner, formerly Bruce Jenner, received media scrutiny on her looks immediately after she revealed her transition to a woman. Before, Bruce Jenner would only receive a modicum of attention on his appearance, but once he become a woman, newscasters and online blogs were quick to comment on her breast size, waist line, hair style and skin. Thankfully someone in the media, Jon Stewart, also realized this double standard and pointed it out on his show.

“It’s really heartening to see that everyone is willing to not only accept Caitlyn Jenner as a woman, but to waste no time in treating her like a woman … Caitlyn, when you were a man, we could talk about your athleticism, your business acumen, but now you’re a woman, and your looks are really the only thing we care about.”

When we dismiss women’s character and personal or professional accomplishments in turn for an appraisal based on her looks, this causes detrimental results. The unattainable desire to be beautiful, or feel beautiful, turns into low self-esteem, depression, eating disorders, and a low valuation of the self. Women will forego leadership opportunities, not ask for raises and depend heavily on a man’s attention because they minimize their own accomplishments. This is not genetic or biological; this is systemic.

Shania Twain is unarguably one of the brightest and most talented musicians of our time. Her music has transcended generations and remained relevant even 11 years after her last album release. The accomplishment of selling out arena tours without a new song on the books for 11 years is something to be admired and applauded. Her ability to strut in thigh-high boots and apply bleach to her hair is not.

And all this is too ironic, considering Twain’s hit song “Man! I Feel Like a Woman” is about shedding the societal expectations of what being a woman means and just having fun. Somehow that message got lost on so much of the world’s media.