For dog owners, taking a walk with Fido is a daily ritual. Now, a new smartphone app lets you raise money for animal shelters in the process.

The premise behind Walk for a Dog is simple: tap the app when you start your walk, and the makers will make a donation to your animal shelter of choice.

The app is free and the donation money comes from sponsorship deals and advertising (there are small banner ads on the bottom of the screen). Each mile walked can earn between 11 to 25 cents for the shelter, depending on how many users are walking in support of a given facility, how often they walk and the distance they log.

Walk for a Dog currently supports 4,000 animal shelters across the U.S., and plans to expand into Canada in the New Year, according to Doug Hexter, CEO of parent company WoofTrax.

Even though Canadian users aren’t yet able to choose a shelter close to home, they can still use the app to make donations to shelters in the U.S. Many Canucks do, says Hexter.

“We do have many users who live in Canada and walk for a U.S. shelter,” he told Vancity Buzz. 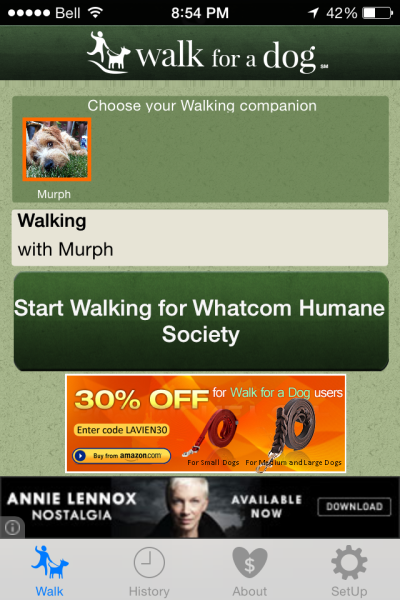 I chose to walk my dog Murph to raise money for the Whatcom Humane Society in Bellingham, Washington because, well, it’s nice to do something for your neighbours.

According to the app, 13 people have walked 98 times for a total of 150.1 miles for the Washington State non-profit shelter, which takes cares of stray and unwanted animals in the area.

Although it’s just been released, Woof Trax is already in the top one per cent of fitness apps on the Apple store.

User feedback has been positive. Many dog walkers report walking a little further than usual knowing that they’re raising money for a good cause. Non-dog owners are using the app too, saying it’s a good motivation to get in shape.

Plus, what other app lets you donate to animal charities without ever opening your wallet?

Start by downloading the app for iPhone or Android.

Enter a bit of information about your dog(s), including name, age and a photo. If you don’t own a dog of your own that’s totally fine, you can choose the “Walk for Cassie” option.

Next, you choose the shelter you’d like to donate to. 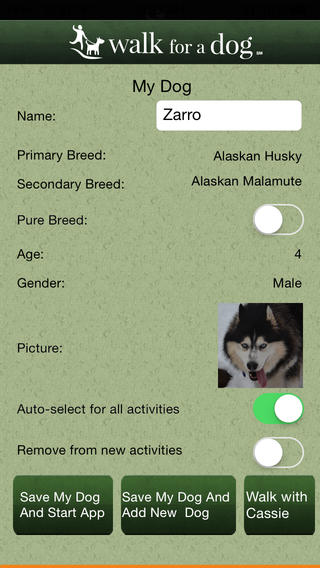