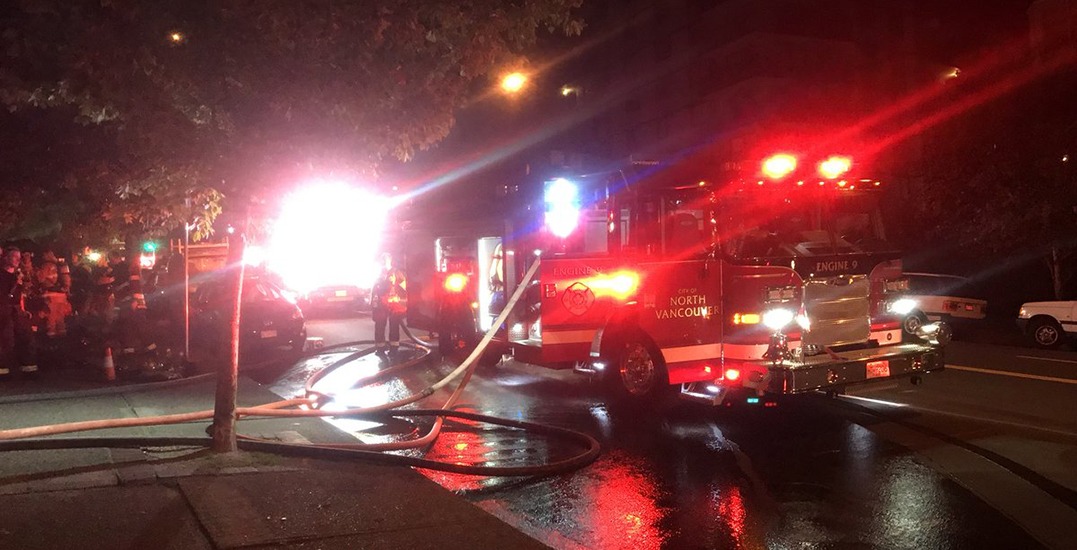 Crews were called to battle an apartment fire that took place in North Vancouver earlier this morning.

The initial call came at 1:57 am, reporting an apartment structure fire at 505 Lonsdale Avenue. Crews from the City Fire Department, the District of North Vancouver, and West Vancouver responded to the incident.

Fire Crews from @NVCFD, @DNVFRS and @WestVanFireDept are on scene of a working fire at the 500 block of Lonsdale

By the time a fire truck arrived on the scene, the seventh floor of the apartment was engulfed in flames.

“The fire started in suite 702. The resident living in the unit left the door open, so the fire expanded into the hallway,” explains Gaudette. “It got so hot that it blew the window out.”

“We sent crews up, who did a search of the seventh floor, as well as the floor above and below. They were able to safely pull residents out of the building,” he says.

After residents were evacuated from the building, a tower truck performed an exterior attack on the fire. After extinguishing the bulk of the fire, crews went back in to finish the job.

Two individuals, the resident living in 702 and their neighbour, were treated for burns on-scene. Several others were examined on-scene and two were taken to hospital for follow-up. Fortunately, outside of that, there were no major injuries.

Although it’s not known for sure, Chief Gaudette speculated that the seventh floor of the building would be “uninhabitable.”

“The floors above and below have been heavily damaged to water. I imagine there’d have to be an assessment done, as well as restoration. We don’t know for sure, but those floors may not be inhabitable for at least a month or longer,” he says.

A cause for the fire has yet to be determined.

Working Fire at 5th and Lonsdale. Please avoid the area at this time pic.twitter.com/5A1za4BfIR