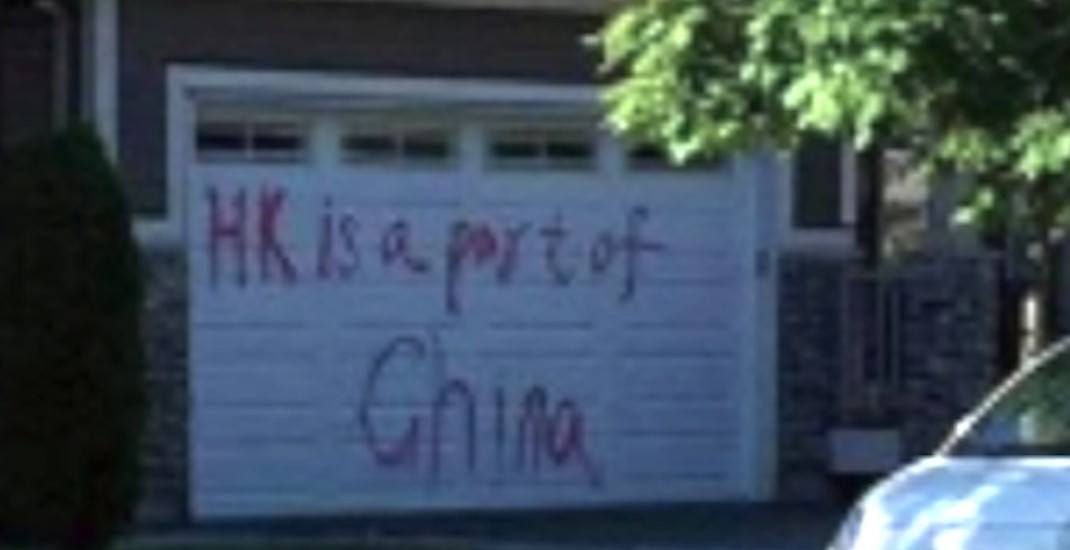 Police are investigating after a Coquitlam home was vandalized with an anti-Hong Kong democracy sentiment.

A photo of the graffiti sent to Daily Hive shows a white garage door spray-painted with the words “HK is a part of China” in large red letters.

“The graffiti is believed to have happened shortly before police were called at about 9:30 am,” said McLaughlin.

Investigators have identified one person of interest who is described as “possibly Asian, in his late 20s, with a stocky build, and driving a blue car.”

“The motive cannot precisely be determined until a suspect has been identified,” said McLaughlin, adding that police are “well aware of the current conflict and debate centred around Hong Kong.”

“We’re encouraging anyone who saw anything, or who may have surveillance video of the area, to call police.”

In recent weeks, the tensions between pro-democracy Hong Kong supporters and pro-China supporters have escalated in Metro Vancouver.

A few days later, police were called to a prayer meeting for Hong Kong at a Vancouver church after nearly 100 pro-China demonstrators gathered outside.

Protests in Hong Kong began to escalate in June over a controversial government proposed extradition bill.