The eleventh commandment wasn’t written in stone, but instead on a dotted line: thou shall tip, and tip generously. At least that’s according to the anonymous philanthropists, who are “doing the Lord’s work one tip at a time.”

Signed simply as @tipsforjesus these average angels are leaving massive amounts of money behind, up to $10,000 on small bills – something most servers could only pray for. 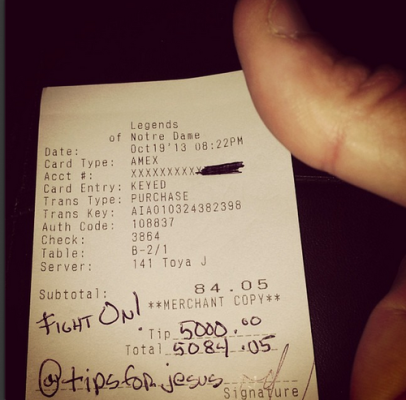 The generous gratuities have been popping up in restaurants all across the United States, and documented on the Tips4jesus Instagram.

Little is known about the Instagram page, which boasts posts since September of happy servers holding receipts.

Thus far this God Samaritan, whether working alone or within a group, has dolled out over $54,000 to servers across the country.