Angélique Kidjo is a woman.

She’s also an artist, a feminist, an activist and a mother.

Born in Benin, Africa and now based in New York, Kidjo is one of the biggest figures in African music. She is celebrated as much for her singing and songwriting as she is for her advocacy, and amongst extensive accolades that include Grammy Awards and Honorary Doctorates, she is a UNICEF Goodwill Ambassador, has been named “Africa’s premier diva” by Time, and most recently graced the cover of Forbes Afrique as part of their list of Top 100 Influential Women.

“Are you an artist, are you a politician, are you this, are you that? No. I’m a human being,” Kidjo states. “People say it’s not your place as an artist to speak about that stuff. Where is my place? Tell me. I pay taxes, I’m a citizen of the world, and if I see somebody suffering, you won’t take that away from me because I’m an artist, because I express feeling.”

The world, according to Kidjo, is critically monochrome. Negativity, in general, can be too often made a habit, skewing our vision into a single sour viewpoint. Kidjo speaks passionately about the importance of avoiding a one-dimensional outlook, particularly when it comes to socio-political issues in Africa and especially in regards to its women. For the survival of our humanity, it is imperative, she insists, that we keep both our eyes and minds open.

“We have to stop telling the story from one angle,” she says. “Between two colours, you have multiple layers of colour. If you don’t look at it very closely, you miss out. But we live in a society where we just like to tell one story because we think that people won’t want a different colour of paint on that story.”

With music as her platform, Kidjo decided to ignite a dialogue that discussed how hardship, as a natural component of life, falls upon women all over the world — and is not just limited by country. 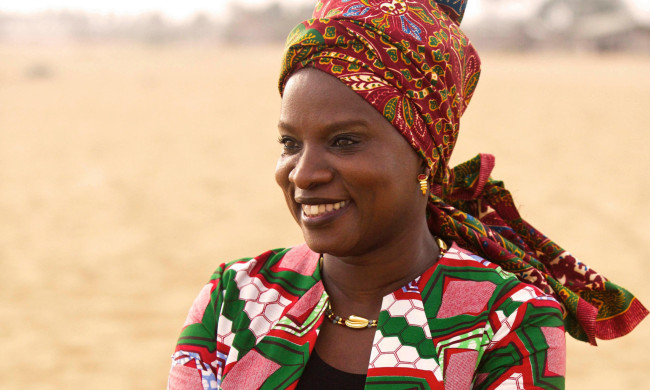 This conversation served as the foundation for Kidjo’s latest album, Eve. Named for her mother and dedicated to the women of Africa, the album, like those before it, features songs performed in several Beninian languages and cultural rhythms. During the recording process, Kidjo travelled back and forth between Benin and Kenya to work with traditional women’s choirs. Striking her significantly was the overwhelming prejudice that these women felt from Western media.

“The women were asking me, ‘what is it that makes the rich country’s population feed in on our misery? How can anyone take any pride portraying people through one lens of story?’ And I’m like, ‘you got a point,’” says Kidjo. “The next question was, ‘why can’t they show us something where we can be a family of women in the world, and cry for one another, and hold one another? Why are we the only ones that are always victimized?’ That’s why I did that album because people suffer everywhere. Suffering has no nationality, no language, no colour. Bad things happen everywhere.”

Along with the choirs, Kidjo also collaborated with various artists on Eve, including Dr. John and Vampire Weekend’s Rostamm Btmanglij, who understood the diplomatic narrative she sought to convey. Furthermore, the inclusion of masculine counterparts served as an equally important component within the dialogue.

“We have to be very careful not to diabolize men because we cannot find solutions to our problems without men,” she says. “We are created to live together on this planet, not against each other, and we need to be smarter than that.”

The rousing collection of voices on Eve — including her mother’s on “Bana,” a Congolese song from her childhood — celebrates strength, legacies, and the ability to exchange stories in an open and positive way. Eve’s heart, like Kidjo’s, beats for expression and for freedom, and makes an important plea to reassess our perspectives and look up, out, and all around us.

“Let’s get the discussion started, then get to work,” she says. “Let’s find solutions to the problems together. We can’t talk about women’s rights without talking about human rights. It’s just words, all those, if we don’t do anything. Talk is cheap, action is expensive.”