Andy Bird always wanted to be a wrestler. It’s something his mom had watched her whole life, and while she was pregnant with him. Perhaps there was some wrestling by osmosis magic going on.

Either way, Andy Bird entered this world and grew up loving good old fashioned wrestling. Bret Hart was his favorite growing up, which is a common theme amongst many Canadians (especially those in Western Canada). He watched these larger than life figures perform in the ring and he wanted to be like them.

“I always admired [Bret’s] hard work, passion, and his wrestling matches were so entertaining and told great stories.” Andy explains. 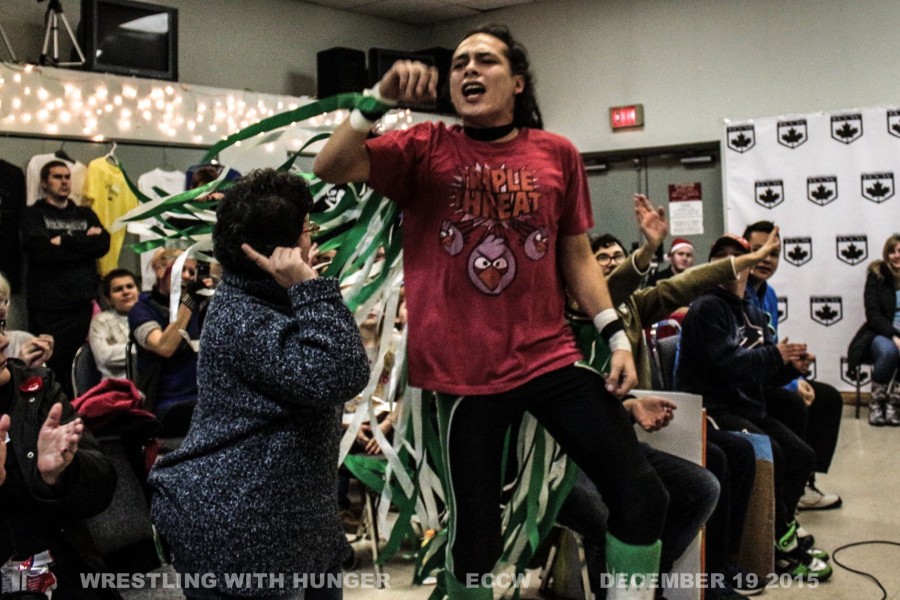 The only problem Andy had was figuring out how to start out on his trek of becoming a professional wrestler. Enter MySpace. Yep, you read that correctly. MySpace.

“I didn’t know how to get into it, so I sent a message out to Nattie Neidhart on MySpace when it was still a thing. I didn’t expect a reply but she did and told me to go to Calgary and train at BJ’s gym. So I saved up and on January 1st of 2010 I grabbed a backpack with shoes and kneepads and a suitcase of clothes, caught the bus and went to Calgary.”

With no place to stay, Andy made it up as he went along. He found a library and googled rooms to rent. He found a place to stay for a couple of weeks here, and a couple of weeks there, all while he trained to become a wrestler. If there is one thing you’ll find out about Andy is he doesn’t let much of anything get in his way. Even when the gym he went to train at closed down.

“I was at a place I hated with a crappy roommate and a boring job and was wondering what to do when Randy called me and asked if I wanted to move to BC with him. I said yes and quit my job, put my 2 weeks in the apartment and I moved to BC in October of 2011.”

“Randy” is one of ECCW’s top stars Ravenous Randy, a mainstay on the Vancouver indie circuit. Bird met Andy at training in Calgary, and immediately a trainer/mentor relationship formed.

When I asked Andy why Randy invited him to BC he claimed he didn’t know. I reached out to Randy to ask him and he explained “the reason I brought Andy out to BC when I moved from Calgary was because I saw/see so much potential in him and I wanted to be part of his journey to success.” 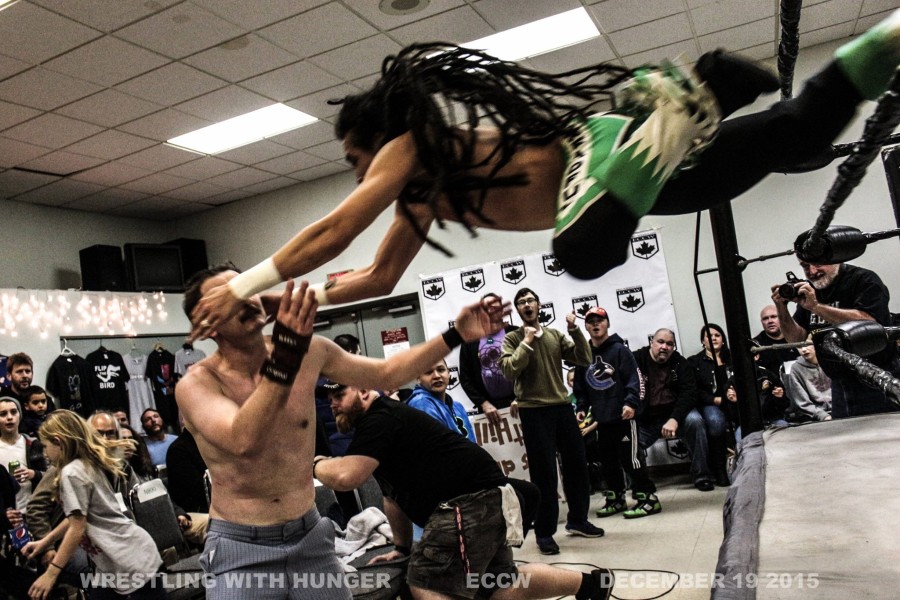 Once again, Andy made a big move in life, chasing his dreams. He has since wrestled in front of a thousand people at the famous ECCW Commodore shows. He has wrestled all over Western Canada. He has become a featured player on the ECCW roster. He is doing what he always dreamed of doing.

And now he wants to help other First Nation youths chase their dreams, too, showing the same fearlessness he’s shown throughout his life.

Enter the Bird’s Nest, a GoFundMe initiative created by Andy Bird. I’ll let Andy explain the background that led to the creation of the Bird’s Nest in his own words, taken from his Go Fund Me page.

I want you to imagine that you live in a remote community of Saskatchewan, population 3,500, with nothing but dirt roads.  There is no work, no industry and no stores.  There is literally nothing to do and you are surrounded by drugs and alcohol abuse because that is how a large majority of the people cope with their hopelessness.  Education is almost irrelevant, in some cases even discouraged by your own family, because really, what’s the point.  The suicide rate is higher than almost anywhere in the world.  The teen pregnancy rate is so high it is considered a national public health crisis.  You are twice as likely to live your life in poverty and the chance of sexual abuse or exploitation is higher than anywhere else in Canada.   People from your own country assume that you are either lazy or unmotivated to do anything with your life, when the truth is that since you have never experienced anything except your small community, the idea of venturing out on your own is so overwhelming and you end up trapped in a life that you do not want.  The same life that everyone you know has lived.  This may all be hard for you to imagine, but trust me it is much more depressing, shocking and heartbreaking than you could ever imagine….

It’s a bleak vision, but that is the reality of Andy’s reserve. His goal is to change that, and offer a helping hand to the children of the reserves, to let them know they can do anything with their life, to expand their borders, and to dream big.

How does he plan on doing that? By building them a nest, a of course. In the form of a house. 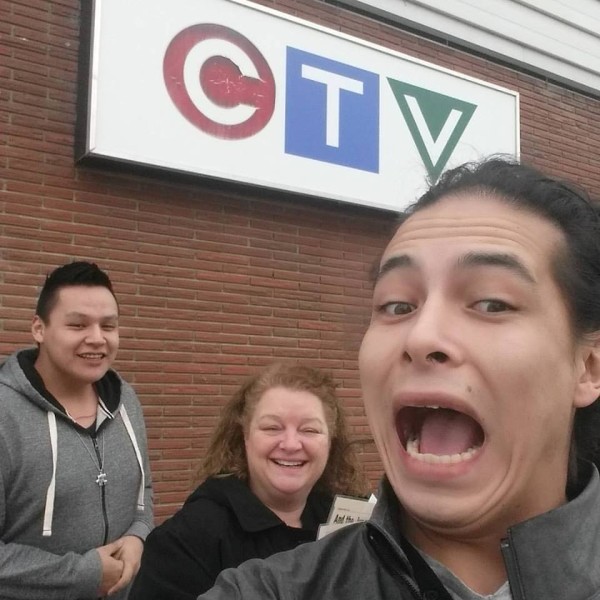 “I am going to build them a nest, a place in beautiful BC in my neighbourhood that they can come to with familiar faces, security, warmth and encouragement.  My mom, Patti, has just moved from Montreal Lake to be the first “house mother” and students will be able to upgrade or complete their high school diplomas or head straight into post-secondary education in this home away from home.”

The short term goal is to raise $26,000 to rent a 6 bedroom house in Maple Ridge to provide room and board for five youths from Montreal Lake, Andy’s reserve he grew up on. Andy is assembling a team to help the kids with college/school enrollment, in order to complete their education. He is working with the school district administration to make it happen.

It’s not just schooling he wants to help with, though. It’s the simple things you never think of. Like learning how to drive and get your learners license. Or how to get good credit with banks. Or how to prepare for job interviews. It’s helping provide life skills to First Nation youths that might not otherwise have gotten them.

Make no mistake, there are still plenty of hurdles in Andy’s way.

“We have spent hundreds of hours on the phone with government officials, provincial leaders, and getting the runaround on how we can help these young eager individuals, but we haven’t stopped and here we are.”

As usual, hurdles don’t really phase Andy. He simply finds a way to get past them. He has a Wrestlefest fundraiser being put on by ECCW on February 27th, a wrestling show at the Greg Moore Youth Centre in Maple Ridge, to help raise more money. He’s gone on CTV in Saskatoon to keep spreading the word of his Bird’s Nest. 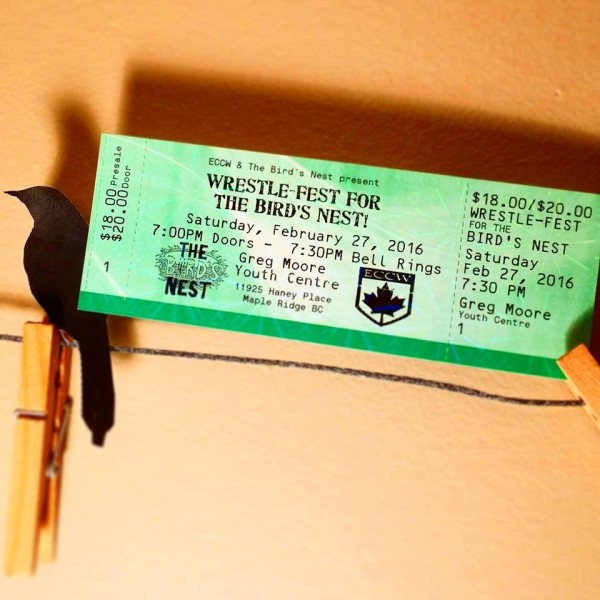 In short, Andy Bird is doing what he’s always done; find a way to achieve his dreams. Except now, he wants to help others find theirs.

“I was talking to one of these kids who wants to come out and I asked what is your dream, what do you want to achieve and it broke my heart to hear him say he doesn’t have any dreams,” explained Bird

If Andy has his way, they won’t need to go to MySpace to figure things out. They’ll just need to spread their wings and fly.