I met Andrea Bucko at Chill Winston and decided almost instantly on a bottle of red. This vibrant, young woman sat across the table from me with so many layers to peel back: a role in Tim Burton’s “Big Eyes,” an upcoming movie called “Gord’s Brother,” directed by Jeremy Lutter, in which she plays a monster, a role in a play centered around women, and soon, launching her own marketing company. We start off talking about the small things, the passing of time, the people we remember, the concept of love.

I realized that the way she speaks, the way she lives, is like a river; calm on the surface and glinting with light, but below, the current runs deep down into dark waters, her stories of anxiety like jagged rocks lining the bank, overcoming them like swimming to the surface against an undertow and laying breathless on the shore. We all grow differently, I suppose, some through soil, others through stone. This is someone who fell in love with acting young and is now realizing the truth about those choices, evolving from them, surviving instead of sinking.

“I don’t think acting is about playing someone different than who you are, but instead finding a part of yourself in that character and then recognizing your differences,” Bucko says, as she slices a piece of steak back and forth, back and forth.

“You know, one thing I realized was that I had to let go of time,” she puts down the knife. “There is so much pressure on women to make it when they’re young. I mean, one of my best friends has booked two pilots and she is constantly working, and I train and train and train and I’m not where she is, but I do feel deep down that my time will come, I just have to let go of when I think that will be.”

She smiles, I smile. We both chew for a moment.

“Do you feel liberated then?” I ask, “from all the pressure?”

Andrea rarely thinks before she speaks; it’s like a reservoir of words, as if the answer was already there before the question was asked, the dam always broken.

“Yes, but you see, when I let go of time, that pressure doesn’t even matter, I don’t have to be the lead on a TV show and I can just appreciate art and learn more about myself and grow as a person,” she says. “It’s so much further than skin deep, it’s… on a molecular level. Looking within yourself and facing your fear makes you shed all that weighs you down and holds you back. I don’t know where I’m going or where my path is, but I know it’s more than what I wanted when I first started.”

I wanted to know about when she first started.

“When I got into the industry I was really naïve, and I was turning 20, and I thought that acting was all about your look and society’s perception of what you are on the outside, and it didn’t mean much what was on the inside…but now, I have grown from that and evolved and a lot of women get into it young, and when you mature you see a whole other perspective.”

“But how did you come to that realization?” I asked, knife in one hand, fork in the other. “Is this business not about compliancy, at least at first, do you not have to earn their trust, work your way up?” I looked down at my half of the steak, bloody in the middle.

I was thinking of those “before they were famous” segments that show Ashton Kutcher in underwear or another nobody silently sipping a coke, unbeknownst to them the fame, the riches, the power, that waited. Surely you have to start somewhere.

“When you watch a film, and you’re moved by emotion and you see this character and you connect to them, that’s what I want to do. You watch these strong female characters and you think “okay, I have been there before, I have felt that way before.’

What makes me really irritated is that the industry doesn’t give me many opportunities because it is so stereotyped and I’m trying to break that barrier right now. I want to do that role where I’m cast for something because I’m capable for more.”

“Curiosity and mystery,” she says. “That’s what makes me want to play other characters; I want to know what it feels like to wear their lipstick, wear their perfume, wear their clothes… because I want to experience what it would feel like to be in that person’s shoes.

You never really know when you meet someone what’s really going on inside, which is the incredible thing about acting because you do get to know that, you get to dive in and explore.”

When I had first arrived, stepping out of the rain into the restaurant, I remember her mentioning that she was in a play.

“Tell me about the play.”

“Well, I just got cast two weeks ago and we are starting rehearsals in January and the play goes up at the end of April and first week of May,” she slides her empty plate to the corner of the table.

“It’s called Women in Manhattan and delves into the lives of three upscale Manhattan female “yuppies” whose financial success is counterbalanced by their unmet emotional needs, they struggle with the same issues but from totally different perspectives. When you open the play book of cast members it says ‘woman, woman, woman, woman,’ it’s a full page and it’s incredible!”

She laughs while mimicking her finger going down the page.

“I play Billy and she has the perfect marriage and perfect husband but she still feels alone and she still feels empty. Basically as a character, you start to ask yourself, ‘even if you have everything you want, why do you still feel that emptiness and feel alone, and what does it really take to make a relationship work?’ and that’s something I have felt in life.”

“So you are able to channel those emotions into your character, as you mentioned before, finding a piece of yourself there and honing in on it?”

“And in a way, that ties in to some advice you received from Christoph Waltz on the set of Big Eyes?”

“Yes, Big Eyes is the most exciting thing I have done so far. It’s directed by Tim Burton, and I booked a small role but it was the most incredible experience because I got to work alongside Oscar winner, Christoph Waltz and Academy Award winner, Amy Adams,” she says, taking a quick sip of wine.

“Christoph Waltz told me, between takes, that if he could give me some knowledge about his experience as an actor, it’s that life experience is more important than anything else, he said, see art, go to museums, travel, meet new people, fall in love, get your heart broken, that is the best advice.”

She reflects for a second, her hands often move with her words and they pause on the stem of her glass.

“There comes a point where you need to get in touch with yourself as an artist and that way you can connect to different things. Getting those three sentences from him was amazing.”

The recording is suddenly full of noise, laughter, and a male voice. The waiter pours the last of the wine into our glasses. We both laugh, our tongues are thick and red.

“I can’t believe we just finished the bottle!” she says. 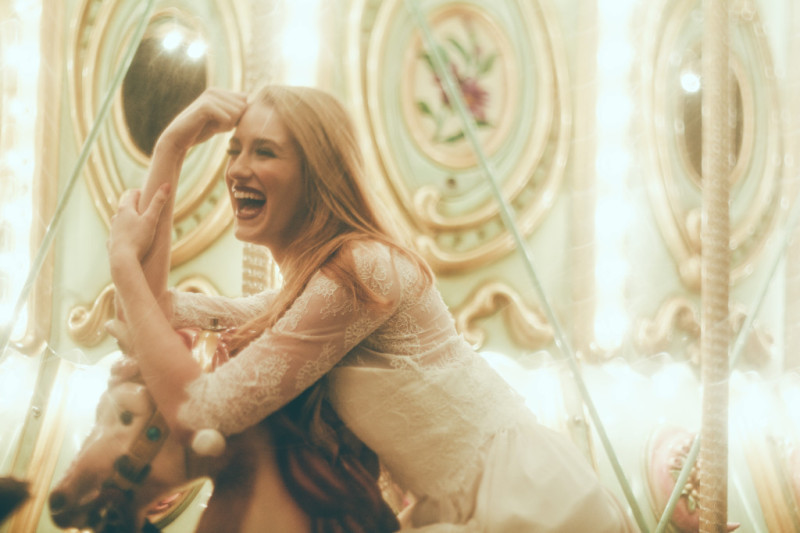 We discuss cheesecake, a tiny little square for $8. A few minutes later my fork is in my mouth, “this is actually really good, worth the price.”

Her response is muffled on the recording; she must have a fork in her mouth too. Then we are back at it.

“So many people want to act, but I have made a choice that this is what I want to do, but I also think it’s important to have passions on the side.”

“Yes, what I realized was that the pressure of having to constantly book and make it NOW wasn’t happening because I was so obsessed with that world and envious of close friends of mine. Instead I decided to let go of time and focus on being more grounded with more focus on what will really make me happy.”

The waiter dropped off the bill.

“Opening my own marketing company isn’t something I’m doing because acting wasn’t happening, I am booking, but it’s a different process for me. I want to not only be an actress, but an entrepreneur and a writer, and I can be so much more than I give myself credit for. I think a lot of people limit themselves.”

“What creating my own marketing company has done is make me stronger, more independent, and it has given me self-confidence as a woman. All of those things will transcend into my acting, because anxiety and insecurity is something I have struggled with and now I feel more well rounded.

Strength in a woman is something I look up to. That doesn’t mean I only want to play power house characters, but strength can even come from the most broken people.”

We pull out our cards to pay.

“Coast Infinity Marketing,” she says, reflective. “Infinity is one of my favourite words, endless possibility, and time.”