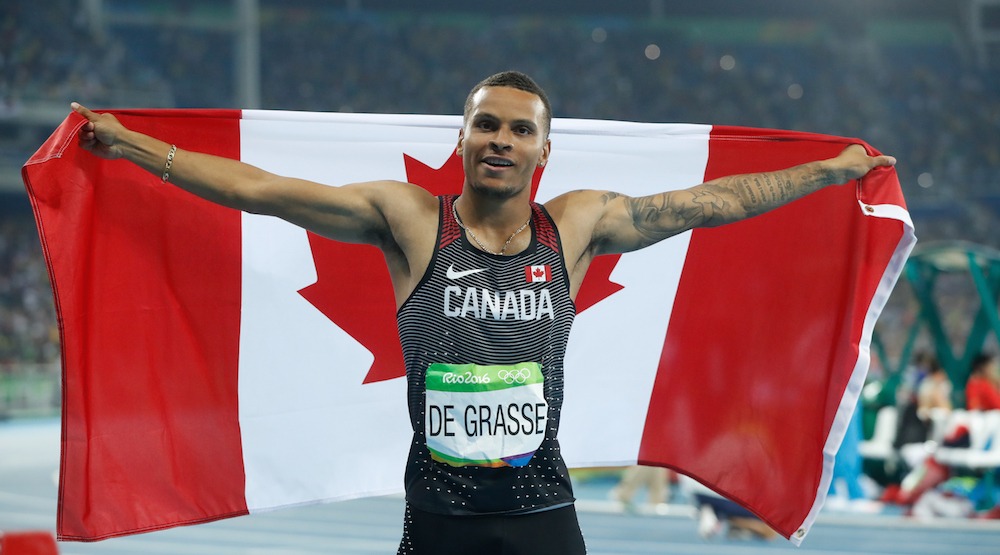 Andre De Grasse is the fastest man in Canada.

In August, he could have added the title as fastest man in the world, were it not for an untimely injury.

The winner of three Olympic medals in 2016 was poised to beat Usain Bolt for the first time ever at the World Championships in London, but the showdown never happened.

De Grasse suffered a hamstring injury days before the competition, forcing him to miss the London track meet. It was an opportunity lost that he’ll never get back.

“It was pretty tough watching the World Championship,” De Grasse told Daily Hive on the phone from Toronto. “Seeing the times, I knew I had a great shot to win. Definitely was a bummer for me.”

In what was Bolt’s last track meet of his career, the legendary Jamaican sprinter did not go out on top. Two Americans, Justin Gatlin and Christian Coleman, finished ahead of him.

De Grasse’s profile grew immensely after Rio. Winning three Olympic medals for Canada will do that.

It was a life changing event, but the 22-year-old who has been pegged as the heir apparent by many, was grounded when asked how his life has changed since Brazil.

“I just have a lot more on my schedule,” he said understatedly. “A lot more things to do.”

His fame has afforded him the opportunity to help out with charitable causes. De Grasse was raising awareness for IPF in Toronto last week.

Helping shine a light on #IPF ,a rare but fatal lung condition, with my fellow teammates #FightIPF #IPFInfluencer #Ad pic.twitter.com/CDdAMwJMnk

IPF is a fatal lung disease, for which there is no cure, and as many as 6,000 Canadians are diagnosed with each year.

De Grasse, along with his 4 x 100 metre relay teammates Brendon Rodney, Akeem Haynes, and Aaron Brown, are traveling across Canada this fall to help raise awareness.

His relationship with Usain Bolt

As De Grasse burst onto the global scene in Rio, the world became obsessed with what became known simply as ‘the bromance’.

Their relationship seemed to sour this year, when Bolt appeared to suggest that he was disrespected by the Canadian. This came after De Grasse’s coach said that Bolt was responsible for booting the Canadian out of a race in Monaco earlier this year.

What does De Grasse think of the media attention their relationship has received?

“That’s what the media does. One minute they think it’s a bromance, and then another minute we’re enemies.

“We’re just competitors. We work for the same company (Puma), so we get together a couple of times per year, just to talk about the brand. I don’t have his phone number or anything like that. We’re cool. When we see each other, we talk. It’s just like a competitive relationship I guess.”

De Grasse is keeping a positive mindset as he prepares for next season, preferring to look ahead rather than dwell on the past.

“The injury is healing well,” De Grasse said. “Just got clearance from the doctors to start training again. I’m looking forward to getting back on the track and compete next year. It’s going to be a big year.”

With the next IAAF World Championships not taking place until 2019, the Markham, Ontario native said he is looking forward to the NACAC Championship in Toronto in 2018. He has his sights set on breaking the Canadian 100-metre record, 9.84, which was set by Donovan Bailey when he won gold at the 1996 Olympics in Atlanta.

If he could do that, he’d be in good shape to claim the world’s fastest man title.