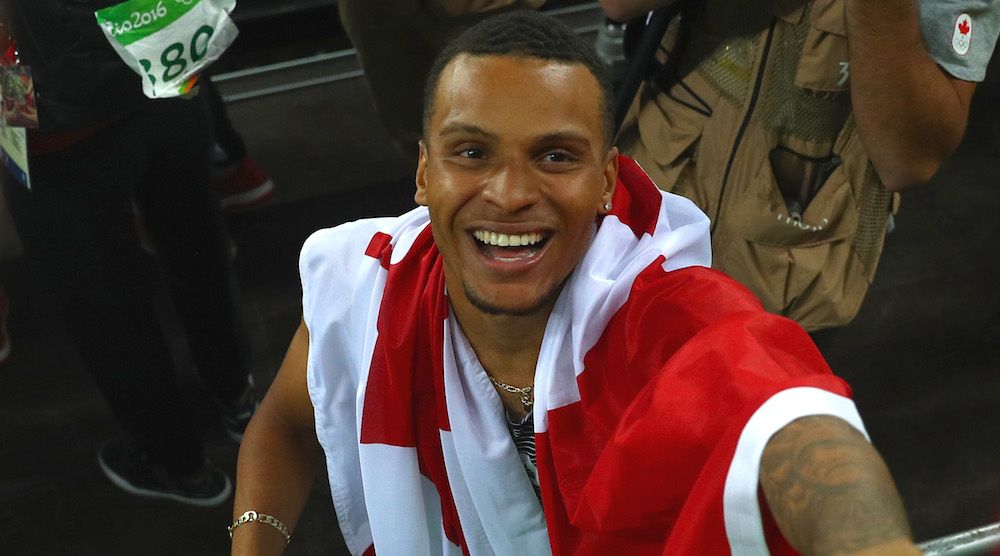 There’s no question that one of the greatest stories to come from the Rio 2016 Summer Games is how a 21-year-old Canadian is inching his way towards becoming the world’s next greatest sprinter.

Set to come home with three Olympic medals, Ontario’s Andre De Grasse has had a remarkable Olympic debut on the track here at Rio 2016. His medal haul began with a bronze in the 100 metre, followed soon after by a silver medal in the 200-metre race – coming second to Jamaica’s Usain Bolt – and then a surprise bronze medal in the 4 x 100 metre relay event.

De Grasse captured the world’s attention after a photo gone viral showed the two sprinters exchanging glances and smiles just before they crossed the finish line in the 200 metre race.

I want someone to look at me the way Bolt and De Grasse look at each other. pic.twitter.com/FAEXxKGU8d

“At the time, I was looking to see if I could have passed him or not,” De Grasse told Daily Hive in Rio. “But I just ran out of room so he was looking at me saying we didn’t need to go that fast because it was the semi-finals and we start the finals the next day. That was sort of a learned experience for me that I probably shouldn’t have done, that I need to be able to recover for the next day… At the end it kind of cost me.”

Having just won his third medal from the relay event, De Grasse didn’t believe it at first as he received the news while conducting media interviews. But then he heard a commotion in the crowd. By then, about 10 minutes after the race, the times and the rankings on the stadium’s jumbotron had changed. Canada had advanced to the third place bronze medal position after the United States was disqualified for poor passing – crossing the line on the track.

“When it finally came up on the board that the US was disqualified we felt bad for them,” he said. “But at the same time, we felt happy because we had accomplished our goal and come with a new national record. So we were just very excited.”

He says he has learned from two major experiences last summer at the IAAF World Championships in Athletics held in Beijing and the Pan Am Games in Toronto, particularly with the mindset he needs to have to be able to perform at his very best in front of large crowds.

“Coming into Rio, there should have been no nerves not performing well because I’ve done it on one of the biggest stages with the World Championships,” he explained.

Given his stellar breakthrough performance, expectations for De Grasse’s future are now greatly elevated to the extent that many are now calling him the next Bolt, who has won nine Olympic medals – three from each Games since 2008, and all gold coloured. While he finds that flattering, he wants to distance himself from the reference and create his own name and legacy.

“It’s 50/50 being the ‘next Bolt’ because I don’t ever think there is ever going to be a Usain Bolt,” he said. “I kind of want to be Andre De Grasse. It’s a good feeling, it’s a good compliment that people say I’m the next Bolt, but I want to create my own history and path – to be one day be called the next greatest sprinter, Andre De Grasse.”

The two sprinters first met at the IAAF World Championships in Athletics held at Beijing last summer, and they’ve built a very friendly relationship since then. They filmed a commercial together with Puma in Jamaica, and there was another opportunity for the men to get to know each other last fall when Bolt visited the University of Southern California, De Grasse’s school, for a photoshoot.

“I met Bolt at the World Championships in Beijing, but the first time we hung out was in October,” he said. “He came down to USC for a photoshoot so I just hung out with him for an hour, and then I went signing with Puma. So we hung out a few times after that.”

Last December, De Grasse signed a multi-year $11.25-million deal with Puma, with up to $30 million in bonuses based on performances. It’s one of the largest deals ever for a Canadian athlete outside of the sports of ice hockey, basketball, baseball, and soccer.

“It showed that I was capable of doing some special things and some big things, and I was really happy about it to be able to support my family, support myself… I knew that it was a really dream come true at the time,” he said. “Now I have to perform up to this task that they’ve given me. It was a little bit of pressure, but at the same time I was very happy that I got the deal.”

When it comes to sprinting in the De Grasse family, it runs in the family. His mom, Beverley, was also a high school sprinter in Trinidad & Tobago before she moved to Canada at age 26.

De Grasse, who is a Gillette brand ambassador and member of Procter & Gamble’s (P&G) ‘Thank You Mom’ campaign, credits his mom for steering him into sport when he was younger as an outlet for his energy.

“I started off with soccer, went to basketball, baseball, now I found myself in track,” he said.  “It was kind of something she did for me, I was always so hyper as a kid so she kind of did that so it would calm me down. That’s basically what it was.”

With P&G’s support, Beverley is in Rio and has been watching all of her son’s competitions from the front row seats of the Olympic Stadium.

“P&G has done a great job with putting me on and I have a great relationship with my mother, and I thought hey it’d be a special opportunity to be a part of the ‘Thank You Mom’ campaign because she has done so much for me,” De Grasse said. “They’ve been treating her like royalty over here. It’s pretty fun… when mom’s happy, I’m happy.”

“The 100 metre was just sort of more special to me as well, it was my first Olympic medal and I was very emotional that I actually got to the podium,” De Grasse said. “I knew it was going to be a tough challenge in the 100 metre final. I knew in the 200 metre I could medal, I’ve raced against most of the guys and I’ve beaten them. But it was just a little more pressure so I knew I had to perform well.”

De Grasse will be flying back to Canada today to spend a few days in Toronto before returning to USC to finish his last semester in Sociology. 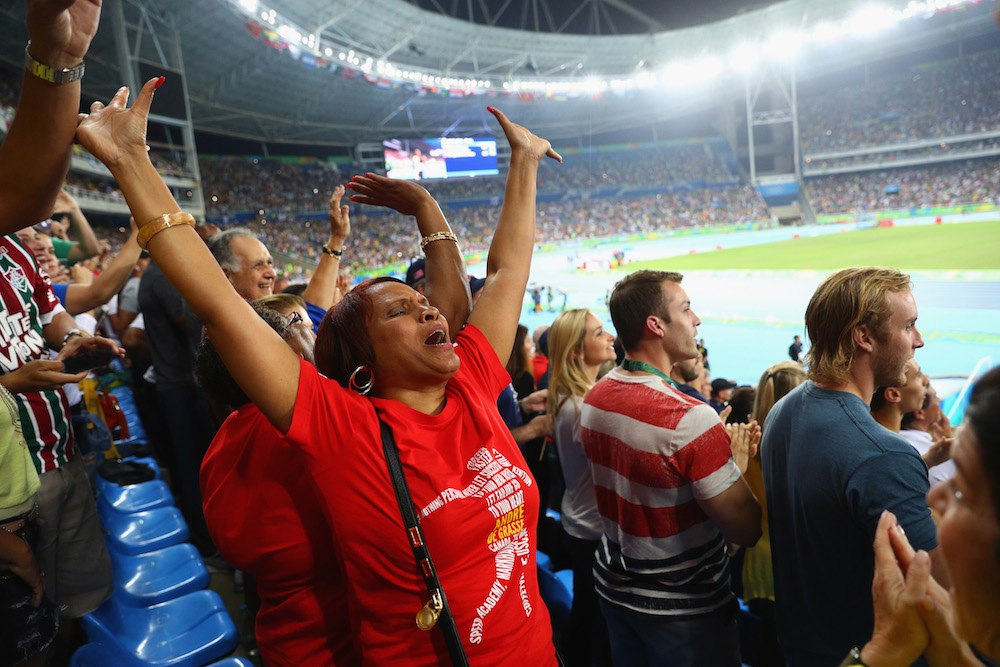 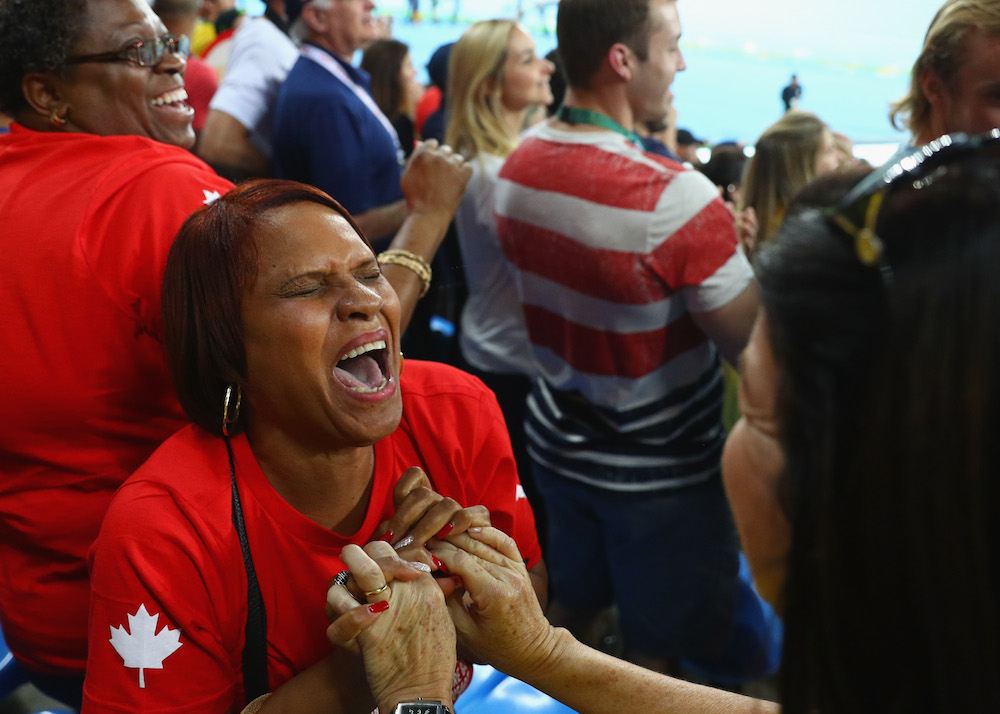 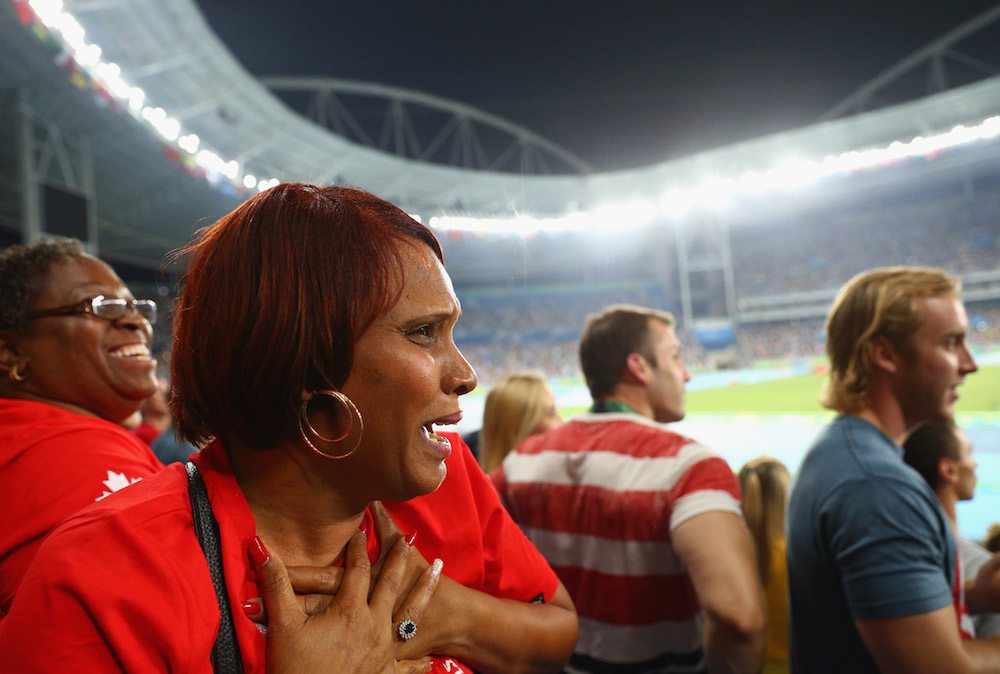 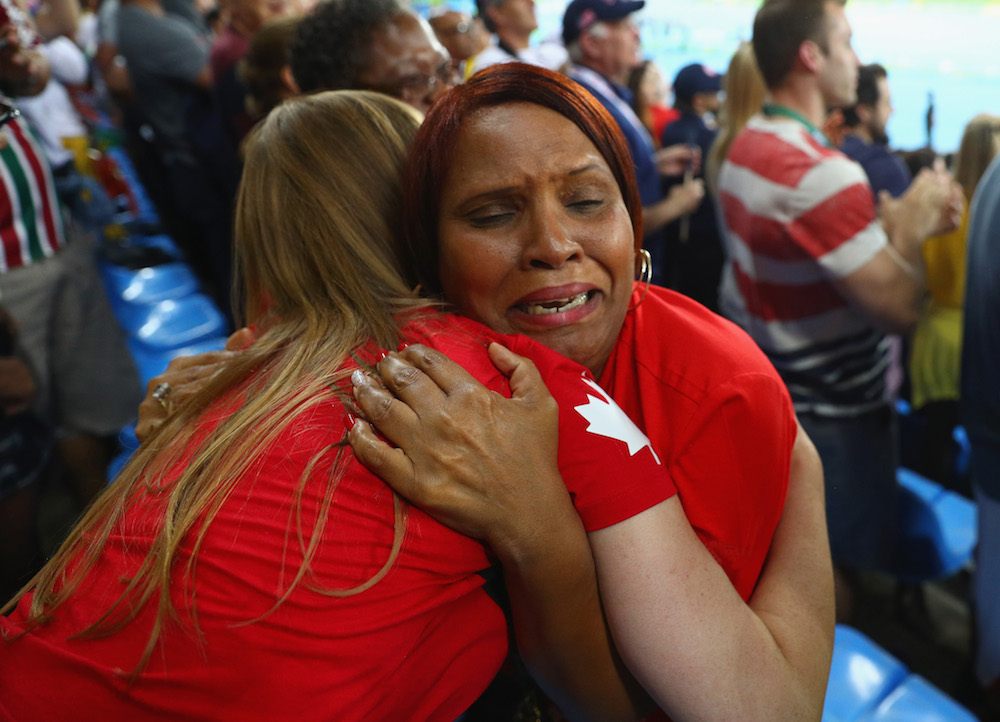 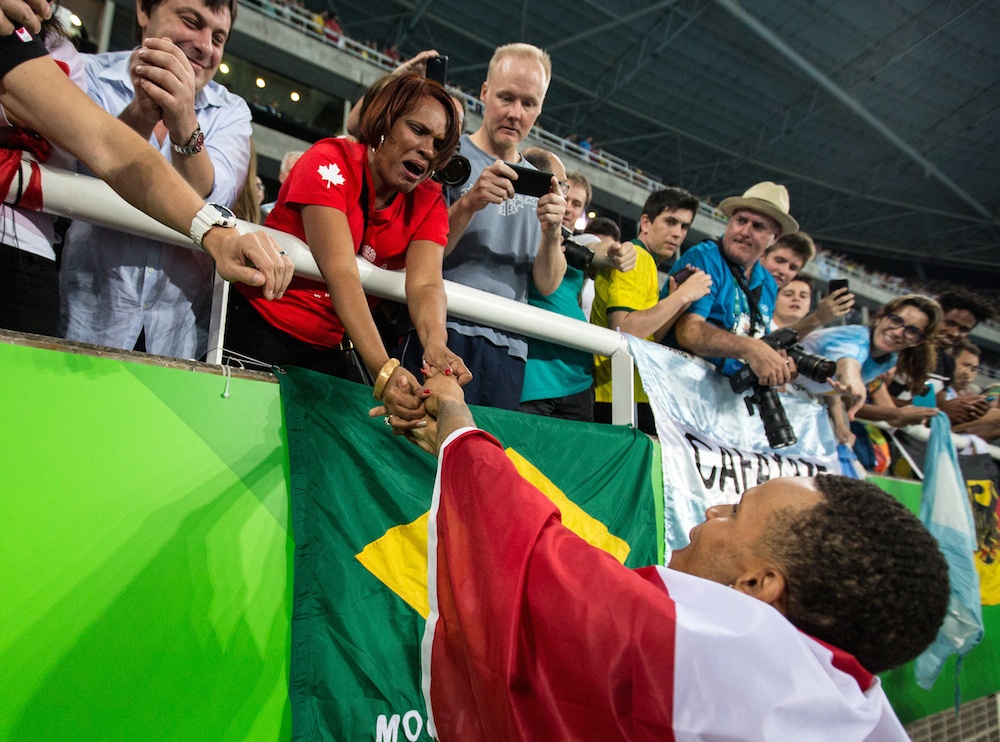 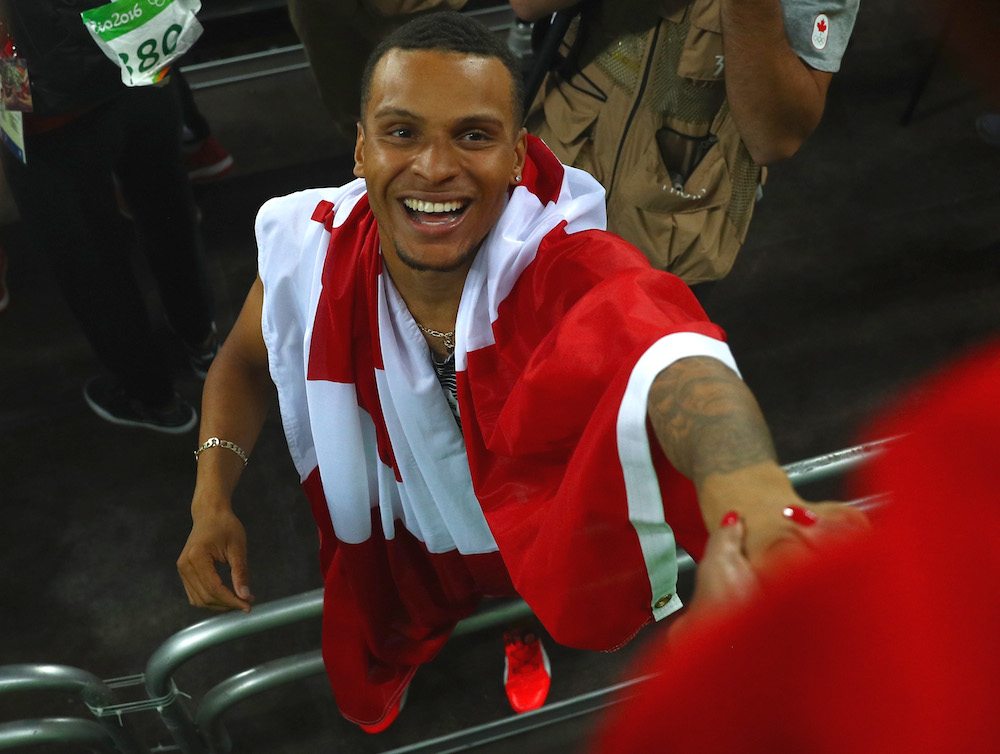