“I didn’t feel good, I felt attacked in my place of work, I felt as though they were discrediting my business by calling it ‘just a back room of a hair salon,'” said Jaden Stevenson, a 19-year-old Vancouver entrepreneur.

It’s a fact: we’re a capitalist society. We value individual freedom. While everyone has the fundamental right to change what they want about themselves, entrepreneurs also have the right to offer the services that allow people to change themselves within the boundaries of ethical and legal limits.

The salon has received a lot of media attention in the last few weeks. To add to the drama, the woman who began a Facebook campaign to get rid of the signage sent two formal letters and has gone so far to send personal Facebook messages has no interest in commenting leading to confusion as to why the salon has had to deal with accusations of child exploitation, racism and complaints of being insensitive to local standards of the community.

In a world filled with its fair share of pedophiles, and where child pornography has become easily accessible on the Internet, an allegation of child exploitation can rapidly discredit a business. Stevenson took tape to the sign covering up the problematic words.

The day after Stevenson censored her advertisement, the unhappy Vancouverite emailed her thanking her for being cooperative. “A big thank you for removing the sign on Feb. 12th.. You are a talented remover: remove unwanted hair, dark colouring of anuses and “offensive signs” it turns out,” they wrote.

Legally, the sandwich board is in the clear and nothing has to change. Sometimes, however, the power of society is much greater than our legal institution, leaving Stevenson feeling bullied. 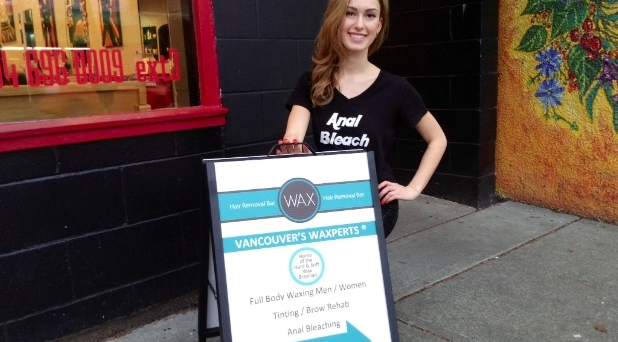 “After hearing [them] out I reconsidered; [we] just have very different opinions on the matter,” Stevenson said. She removed the tape shortly after.

The unhappy Vancouverite took her complaints to the surrounding local businesses on the Drive; the salon’s lawyer sent a cease and desist letter on their behalf.

More complaints were sent via email, suggesting using euphemisms to not cause embarrassment. The whole point, Stevenson said, is to get rid of the stigma of below the waist grooming and to release the service from the taboos it carries. In the middle of March, despite the letter from their lawyer, the unhappy Vancouverite began to send messages to Stevenson’s personal Facebook account stating that not changing the sign is disallowing her from parenting in the necessary parenting style in order to keep the kids safe from predators.

For Stevenson, the accusations don’t add up.

Presently, the issue is still ongoing and is now a branding issue, with the city getting involved. “[The unhappy Vancouverite] still posts on her Facebook group that is private and is talking with neighbours and continuing to call the city of Vancouver trying to gather supporters,” Stevenson said. “Though everybody we talk to from the city and school seems okay with it and I have been told that the [individual] complaining does this a lot and does not give up once [they have] chosen a ‘cause’ to fight for.”

According to Stevenson, WAX Hair Removal has spoken with the city and does not have to take down the sign.

WAX Hair Removal is currently fundraising for Colon Cancer Canada’s annual event Push For Your Tush; a walk/run that raises money for research, awareness and patient support for those with colon cancer. WAX Hair Removal is raising funds by selling t-shirts online that say, “Some Ass Holes Need To Lighten Up!” on the back.

“If we’re getting media light from the negative situation, I wanted to spin it into a positive,” Stevenson said who will be participating in the event on June 15.