At this point, a little more than halfway through the comptetion, only Caity, Dennis and Matt remain, and Matt has won three out of the seven Elimination challenges. In this week’s episode, he finished top three in the Elimination Challenge.

The Cactus Club Yaletown hosted a Top Chef Canada viewing party in the lounge of their Yaletown location, and Chef Matt was not only in attendance, but also cooked for us his winning Curried Cauliflower Soup (delicious!!) from Episode 6. 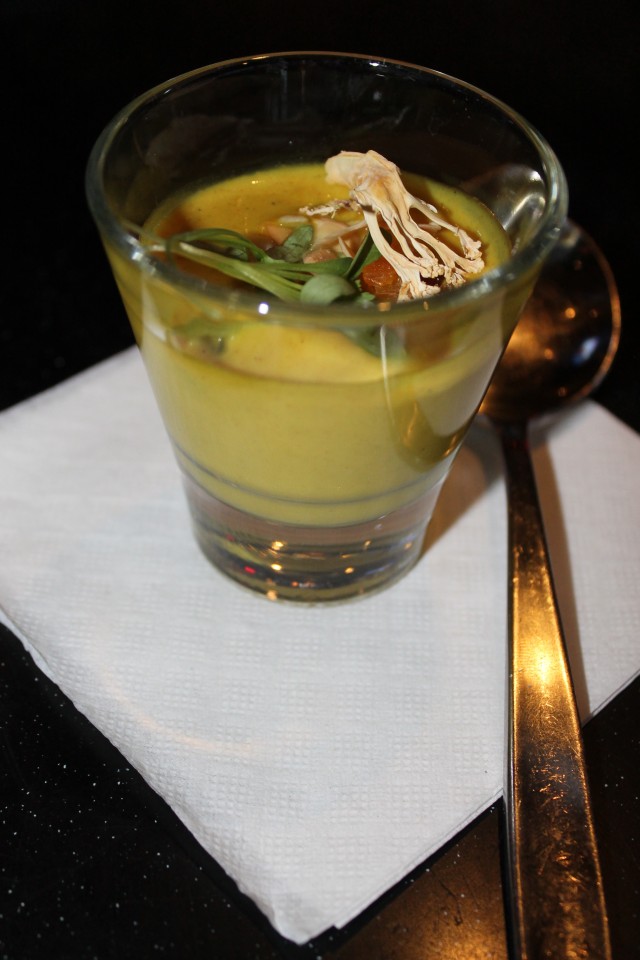 We sat down with him after the episode aired and talked about the joys of reality television (waking up and bumping into TV cameras), his family (he and his wife, Amber, have a nearly two-year-old son), his bad old days at the CIA (Culinary Institute of America), and these questions, which I crowdsourced from Facebook and Twitter .

What was the shoot schedule like? Did you shoot every day?

The days were very long. The cooking took place in real time, but the interviews took a long time, especially at the beginning when there were 16 of us. It was very intense.

What’s your favorite thing to cook for yourself when you’re at home?

I love making breakfast. My son gets up early, so I get up with him and we like to cook breakfast for my wife. Eggs are very approachable but very finicky at the same time. There are a million things you can do with them, but it shows a lot of technique to cook them properly.

What makes a great chef as opposed to a good chef?

I think sourcing ingredients is one of the most important things. If you take two guys who are equal in terms of skills, but one is able to source better ingredients, you’re going to have an edge. Developing relationships with people–farmers, fish purveyors, butchers–can give you a leg up. It’s probably one of the easiest things to do, as well, as it’s more about networking and building relationship than about culinary skill. Those kinds of relationships are important in any business, but especially in the restaraunt business, because if those guys can give you something that’s extra fresh, something special that’s in season, and you can plan your menus around that, it just makes the whole process a lot better.

If you were on Iron Chef, what would be your ideal secret ingredient?

For Vegetables? Beets–they are really versatile.

For Proteins? Our local Ling Cod. You can push it in a lot of different directions.

For Fruits? Peaches. You can go sweet or savoury with them.

I gotta go with Manhattan. I lived there for a few years, and I like the lighter version. I’m not a big “cream” guy. Cream just masks the flavour of things. It coats your mouth in fat, and you don’t get the natural flavour of what you’re eating.

What kind of items would your pantry at home never be without?

Those are 3 basic items that can work in a million different ways.

What is your favorite “healthy” junk food?

I love any of those gummy 5 cent candies.

Rebecca Coleman is a blogger, teacher and social media marketing strategist. She runs a recipe blog, Cooking by Laptop, and loves to experiment in the kitchen. She blogs at Vancity Buzz about restaurants that cater to restrictive diets, and has watched every episode of Top Chef  that there is. Connect with Rebecca on Twitter at @rebeccacoleman.