Tyler Labine (Tucker and Dale vs. Evil, Rise of the Planet of the Apes) the man, the myth, the legend, will be starring in the new romantic comedy That Burning Feeling along with heavy hitters Paulo Costanzo (“Royal Pains”, Road Trip), John Cho (Harold and Kumar, Star Trek), Ingrid Haas (Scott Pilgrim vs. the World), Emily Hampshire (Cosmopolis) and Rukiya Bernard (The Cabin in the Woods).

The film follows Adam Murphy – a real-estate hotshot and confirmed bachelor. He starts to feel the burn of failed love(s) when a social disease takes him face-to-face with a handful of one-night stands eventually revealing the shortcomings of his own image.

“That Burning Feeling is about love, that thing you’ve always wanted to do but were too afraid to try, and a strange mystery infection. It’s a romantic comedy with a little more sting to it,” says director Jason James (pictured below with Tyler). 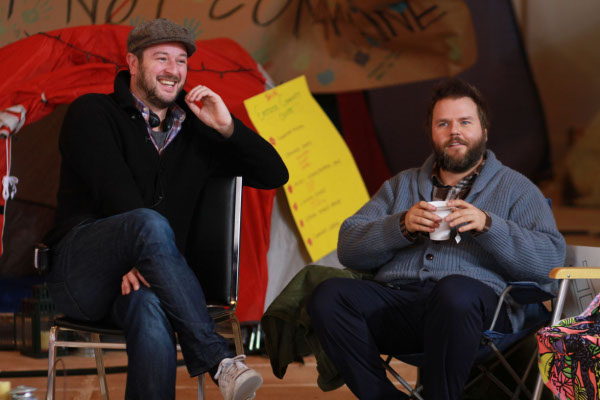 Filmed in Vancouver, That Burning Feeling is a bold and hilarious concept that is sure to garner attention.

I had the pleasure of interviewing the comedic genius Tyler Labine himself. We talked That Burning Feeling, upcoming projects, Ryan Gosling, deep frying turkey’s and more.

Felix: Tell us more about your new film That Burning Feeling? What made you interested in the project and the character your play?

Tyler: It’s a film about dealing with consequences. Consequences for all of our actions, good, bad, mundane. Which is what I found so intriguing about my character Frank. Here’s this guy throwing around moral judgement from a dilapidated lawn chair in his front yard with a joint hanging out of his mouth wearing his pj’s and a tattered robe. He’s not afraid to throw the first stone. He’s already dealt with consequence and he’s already been judged. In a way, in many ways, he’s given up on himself, but he still believes in others. Adam in particular. Our hero. (Tyler pictured below with Paulo Costanzo). 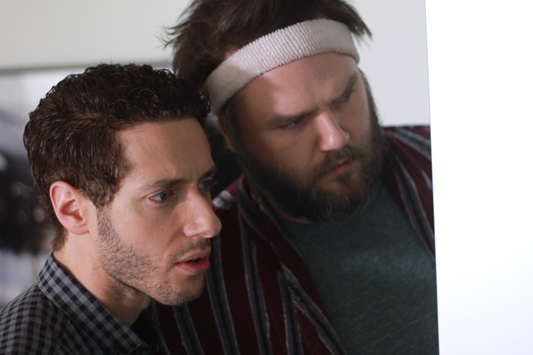 Felix: The film stars loads of comedic talent, what’s the dynamic like on set? Any Stories?

Tyler: I’m chubby but don’t refer to me as ‘loads’. Ha Ha. I kid. So much fun on set, Paulo and I actually go back 15 years but never worked together. So there were lots of comedic boundaries being pushed, lots of one-up manship. It was exhausting but fun. I didn’t get to work with the rest of the hilarious and talented cast much; I did however get to work with my hilarious and talented wife for the first time. Which was awesome.

Felix: You film projects all over North America, but now that you are back in familiar territory (Vancouver) — what can we find you doing on your time away from set? Do you catch yourself playing tour guide to the other cast members?

Tyler: I hit Splitz Grill once a week at least. Best burger in town. I like touristy stuff. Stanley Park, Whistler, good restaurants. Just try to enjoy all the things I miss when I’m gone. Mostly food. Ha.

Felix: I have heard you are on some health kick; you look like you have be lifting weights – what’s your secret?

Tyler: I have lost close to 60lbs. My secret is slow change. Slow life change is the key. This is not a diet, it’s a new lifestyle. A new outlook on food and what it means. Also, diet means nothing without exercise. Tons of it. I’m a crossfit addict. 4 days a week. And I run 2 days a week too.

Felix: Do you remember back in the day that YTV show Breaker High? You were Ryan Gosling’s BFF on the show. Do you guys still keep in touch? Any chance for a reunion project?

Tyler: Believe it or not I DO remember that show. I always loved Tamira. Jimmy never even got a chance with her. What ever happened to that guy? Ha Ha. Yes, I still keep in touch with most of the cast. Including Ryan, when he’s not busy being in every awesome movie ever made. No chance for a BH reunion folks. Sorry. But I hear Much Music is playing reruns again. One day I do hope to get to act with any number of the cast of BH again. They are all such talented folks. I’d be lucky.

Felix: I’m a big fan of you and the characters you play. I think you are hilarious. How are you different on screen compared to off screen?

Tyler: I get misjudged a lot actually. I’m a bit more soft spoken and introspective than people expect. Half the characters I portray would be too exhausting to keep up all the time, but they sure are fun to play.

Felix: If someone made a movie about your life, who would play you and why?

Tyler: Who would play me? I would probably get suckered into playing myself. For no money either. My dream me would be, Chris Pratt, or my little brother Kyle. But more realistically it would have to be Channing Tatum. More accurate. I’m all about posterity.

Felix: Tucker and Dale vs. Evil was a big success. Any chance for a sequel?

Tyler: Tucker and Dale have been conspiring to get together again since the day after we wrapped. We will see what happens. I’m not going to say no.

Felix: The word on Twitter is you are planning on making a new series or film about the ins and outs of deep frying turkeys’ — any comments? Any other projects on the horizon?

Tyler: Ha Ha. Well I was hoping you could tell me something about that sir. Big inside joke, that I’m sure neither Felix or myself will ever open to the public, lest you realize how stupid we are. Other projects … Yes. Have a few movies in the can you can expect to see in 2013.

As for TV, I’m working on developing a new show as we speak. Fingers crossed.

Felix: Thanks for taking the time to meet with me.

Be on the lookout for Tyler in That Burning Feeling, and stay in touch with Tyler and all of his upcoming projects by following him on Twitter @TyLabine.