Sophie Tweed-Simmons, or better known as just Sophie Simmons, made her claim to fame by starring as herself on the hit reality television show Gene Simmons Family Jewels.

But there’s a lot more about Sophie that travels beyond the scope of the show. Sophie is involved in many charities, even lent her name to Sophie’s Place, a centre in Surrey that help children facing and enduring abuse.

Though she was brought up in Los Angeles, she holds British Columbia close to her heart. The Simmons family has a home in Whistler and Sophie spends a lot of her time in the Lower Mainland.

Being raised under the KISS Empire, Sophie is very fond of music, and loves to sing — even sang the national anthem at a Vancouver Canucks game — a warm welcomed surprise.

I had the chance to speak with the lovely Sophie. We talk about the possibility of an upcoming album, how she felt during the Canuck riots, being a Simmons, and more.

Felix: You were recently in Vancouver to sing the national anthem at the Canucks game. Have you always been a Canucks fan?

Sophie: I was always a hockey fan and the Canucks were always my team but I knew nothing about it; as far as stats and players go. Just this past year, I have had friends really explain the game to me and our key players. I have a #33 jersey, Henrik is my favorite.

Felix: How did you feel when Vancouver lost to Boston in the infamous game 7, and the riot started?

Sophie: I was of course sad about losing the game. I went to one game in that series and we won! I was convinced we had the cup. I was in Whistler during the riots. Honestly all my friends and I were taking about was how embarrassed we were. That’s not what Canada is about and we were sad the world saw us like that for a moment.

Felix: The word on the street is you are in the midst of recording your own album? How would you describe your musical style?

Sophie: I am working on a few things. If an album comes of it I would be more than happy. My musical style is maybe best described as Alternative Pop. Alt because I have elements similar to Mumford and Sons, Jazz and Folk. But pop because it will really appeal to most audiences, whether or not you listen to top 40.

Felix: What musicians/bands were your biggest influences on your musical style?

Sophie: I love Adele, Mumford and Sons, Robin Thicke. But I try not to let them influence the message I’m trying to speak.

Felix: How do you find the right balance between things like school and your blossoming career as vocalists?

Sophie: I actually left school. I finished all my major requirements and just started writing.

Felix: With your father being such a powerhouse in the music industry, did you ever find yourself pressured to be in this business, or did you want to do this on your own accord?

Sophie: I really stayed away from music for a long time because I didn’t want the comparison to my father or his success. I want to sing and write because it makes me feel a certain way, and if success comes from that…well that’s a plus.

Felix: How do you deal with any criticisms and comparisons to your father or mother?

Sophie: I take them with a grain of salt. Thank you for comparing me to such high standards but I am my own person so there really is no comparison.

Felix: Beyond music, you are involved with Sophie’s Place. What attracted you this particular issue and to all these different charitable and philanthropic organizations?

Sophie: I have always worked with children so it wasn’t really a leap for me. The Mayor of Surrey approached me on the topic a bit over a year ago. She said she had a center for abused children in the works and needed a young patron. I of course hopped on board. But I like to think I’m more than just a patron, I’m very hands on. 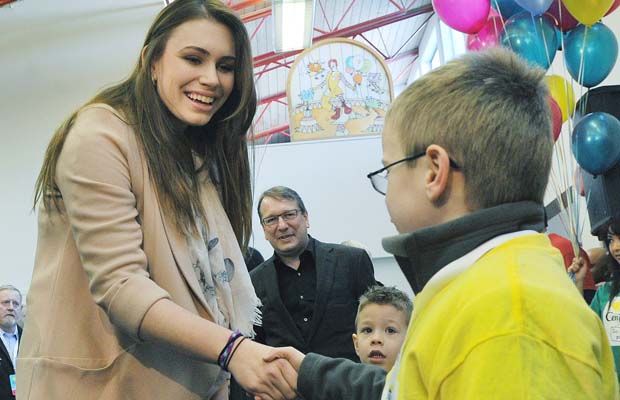 Felix: Last but not least, what’s the best part about growing up as a member of the Simmons family?

Sophie: The best part and I think, the part that most people hate about celebrity families, is that we are given amazing opportunities. I am thankful for them but try not to squander them.