Canadian actor/director and all-around talent Agam Darshi recently took home the Best Supporting Performance by a Female in a Motion Picture at the 2013 Leo Awards for her role in the feature “Crimes of Mike Recket”.

It’s been an exciting year for the in-demand actress, who among her other high profile recent appearances and new roles, directed her first film (which she also wrote), alongside leading ladies Crystal Lowe and Sandy Sidhu, (who produced the project) to bring the BravoFact short film “Fade Out” to life.

Now, the talked about actress will be staring in the new show “Played”, premiering on CTV this Thursday, October 3 at 10 p.m. ET/PT.

We had the chance to chat with the Agam, we talk about her new show, what it was like directing her first film, what she likes to do on her spare time, and more.

You are starring in “Played’ a new television series premiering this October on CTV. Tell us more about the show and the character your play.

Played is about a group of CIU specialist who go undercover to solve some of the worst and most difficult crimes. I play the character of Khali Bhatt who is the tech wizard of group. Khali is also increasingly attracted to the adrenilyn, intensity and dark galmour of the job, and begins to go undercover throughout the season. She loves taking risks and pushing the boundaries and begins to develop a major attraction to Jesse Calvert, who is a C.I.U. rookie with a dark past. Outside of work she is urban, young and loves to party.

What drew you to the project and your role?

The writing is really good. During pilot season you read so many scripts and only a few rise to the top, and make you really excited. This was one of them. Greg Nelson created a character who was complex, edgy, funny, smart and had so many layers to play with.  I love the way Khali mixes in with all the other characters, and her role in the team. She has a wonderful relationship with Rebecca (played by Chandra West) the main boss in the show. There is mutual respect there. Khali’s relationship with Jesse (played by Adam Butcher) is also a lot of fun to play around with. It’s young, dangerous and sexy. There are so many stories and avenues that can be explored between the characters. It’s been a true blessing having the opportunity to do so.

What type of role/character are your favorite kinds to play?

It’s hard to say exactly. I love strong, complex, characters. I love outcasts, because they have something to prove, and because in many ways I’ve always identified myself as one. Every role is a bit different. I feel like as I evolve as an artist and an actress my roles do as well, and what perhaps didn’t interest me 5 years ago, is exactly what I want to do now and vice versa.

What was the dynamic like on set? Any challenges?

The cast and crew were AMAZING! We seriously all got along which is rare actually. Really hardworking talented people, on the entire team. The cast members where so hardworking and such talented people that it raised the bar for all of us to do the best job we could.

The challenge was simply time. 7 days to shoot 1 episode. And these are big episodes. Tons of locations, a big cast, lots of action and lots of drama as well. And CTV also ordered an entire season right off the bat, which means that Greg Nelson did an amazing job with his concept and his scripts, but it also meant that we as a cast needed to hit the ground running. We didn’t have a pilot to ‘test’ things. We had to make strong, dynamic choices with our characters from the beginning. It was scary but also amazing.

What is it about this new police drama that makes it stand-out amongst others currently on television.

The thing that makes Played standout is that it’s not just a police drama, but an undercover police drama. That adds a whole new dimension to the show. These people put their lives on the line and they only have each other to keep them safe. As an undercover cop you can’t go into a ‘play’ with a gun or anything to defend yourself with. All you have is your story and your character. And you pray and hope that if things go bad, that your team mates are near by to help rescue you. This makes the dynamic between the people you work with very intense. You become a family. It also makes it difficult to have ‘normal’ life, because you go home and you can’t talk about work with your wife or husband. It’s like leading a double life and that’s what makes this show so different.

You recently wrote and directed a short film titled ‘Fade Out”. Tell us more about the short.

Yes I did! It was an incredibly fulfilling experience. Fade Out is a short film – a satire, about celebrity culture. We following an ageing actress (Ona Grauer) on the night of her film premiere, as she faces her biggest critic – herself. I am very proud with how the film turned out, and I’ve realized through the process of making it, that being a good director means surrounding yourself with the best. I had an incredible team of producers (Crystal Lowe and Sandy Sidhu), and fabulous crew. They believed in the script, and vision and worked so hard to make this very ambitious story a reality. The best part was that Bravo Fact is behind us. They gave us funding to make it happen, and that felt like we where on the right track.

How did it feel moving from in-front of the camera to behind the camera?

I have a degree in visual arts, (photography) and I’ve written and produced two shorts before, so this wasn’t my first time being behind the camera. But it’s definitely the biggest scale.  I loved the experience, and I can’t wait to do it again. I love having a concept and then seeing it into fruition. I love voicing a belief and then translating that belief into art and sharing it with an audience. I love being a voyeur, and observing people and human nature. The more I do this, the more I realize, that life is stranger than fiction. I can’t wait to direct another film. 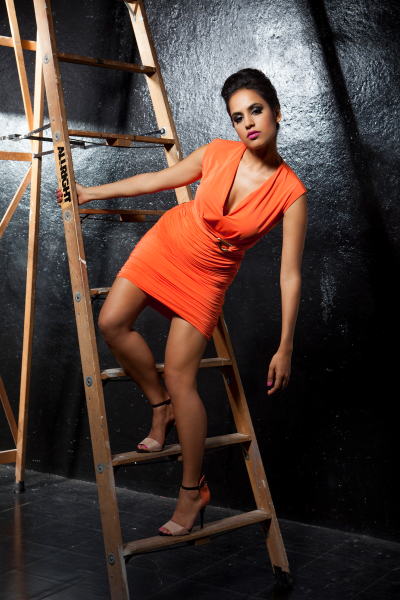 Are you planning on writing and producing more shorts? Possible a feature? (If so feel free to sign me up *laughs).

Definitely. I’d like to move towards making features. I’ve written and produced two shorts so far, and written and directed one. So I feel like I’m ready to start writing a feature, and in fact I am. I’ll keep you posted as the process continues!

Wrapping up, when you are not acting, producing, writing, and directing… how do you enjoy your spare time?

Haha, I am a bit of a workaholic, I admit…. But I absolutely love travelling. I love that fresh perspective you have when you’re far away from your real life. I also paint and do photography, so I am constantly dabbling in that. I love spending time with family and friends. Aaaannnd… I love to shop!

Any inspiring words you would like to give to upcoming actors and actresses?

I say this all the time but you must create your work. Find out what you want to say and say it. Meanwhile audition, take classes, do independent projects. It’s not about waiting for the phone to ring, it’s about getting as good as you can be, and creating work that inspires.

Thank you for your time.