Judah Friedlander known for his trademark trucker hats, over-sized glasses and unkempt appearance, is back with his hottest viral sensations “Pocket Like it’s Hot” which has more than 4 million views and counting. The video is a parody of Snoop Dogg’s hit song “Drop it Like it’s Hot”, But the joke Judah is playing is that he is going around taking credit for directing the video, but in reality he didn’t. 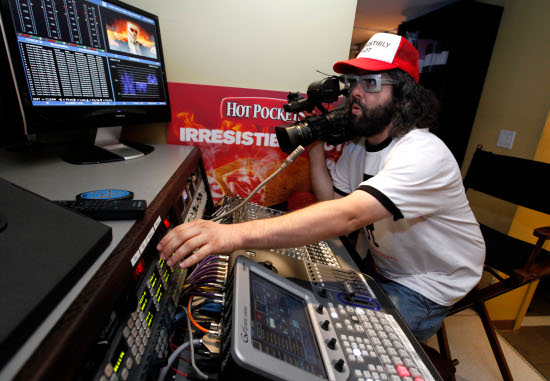 Friedlander’s has always had a thing for comedy appearing in numerous feature films including; Meet the Parents, Zoolander and Full Grown Men. Currently most known for his work on NBC’s 30 Rock, which he plays Frank Rossitano, one of the writers of TGS with Tracy Jordan, (a spoof of Saturday Night Live) He has a thing that in every episode, Friedlander wears a different slogan on his trademark hat — which he designs himself.

Beyond his days at 30 Rock, he headlines at various stand-up comedy venues in Chicago, Boston, New York and LA, including Caroline’s. His best-known “shtick” is “The World Champion of the World”, in which he makes outlandish claims of greatness. For example, he claims on his website to have once scored 243 goals in a single game of international soccer in Brazil while also acting as the referee.

Doing comedy myself, I have been a long time fan of Judah’s and have been following his career since his movie role in the film American Splendor, as Toby Radloff. I had the great pleasure of speaking with Judah Friedlander (via New York) and ask him a few questions about Hot Pockets, American Politics, Vancouver, 30 Rock, and more.