Hot off the heels of Season 5 “The Next Star” returns with another year of pop-star talent discovery.

“We’re thrilled to have The Next Star return for a 6th season and continue to work with Corus Entertainment’s YTV,” said Andrea Gorfolova, President of Tricon Films and Television. “The brand has Grown not only to capture and entertain large audiences, but also as a development tool for young Canadian artists who are able to learn and flourish from the experience.”

The new season of  “The Next Star” will premiere in July on YTV and will follow the young finalists on their Once-in-a-lifetime journey as they master their sound, style and stage presence.

I had the pleasure of speaking with the talented and beautiful Keshia Chanté; we talk about her role as judge on the show, her upcoming projects, and more.

Felix: You’re a judge on the hit show television show “The Next Star”. Tell us more about the show and what inspired you to be a part of it.

Keshia: The Next Star is a show that searches across Canada for the most talented young singers and gives them a platform to share their amazing skills. I started my music career at 13 and that opportunity alone was hard to come by. Talented kids these days are SO lucky to have a show like The Next Star, and that rare opportunity brought into their cities! If I was 13, I would have definitely auditioned for this show and that’s what inspired me to be a part of it. I saw the show and asked my team to reach out to the producers. The young hopefuls that audition get good tips and guidance!

Felix: As a judge, it must be hard to critic some of the contestants, especially in that age group. Do you have any tricks of the trade to help you deal with sticky situations? Do you feel you are a tough judge, or an easy judge?

Keshia: It’s a balancing act. My mother gave me tough love & I do feel like some of the greatest talents were given encouragement, dedication but the hard truth. Without the tough love, I don’t know if I would have survived the industry unscathed. I feel like tough love is something a parent does, I’m a judge & my role is to be encouraging and give constructive criticism, not just critiques. As long as I see passion and drive, I feel the sky is the limit for these kids & I just want to spark that as much as I can! 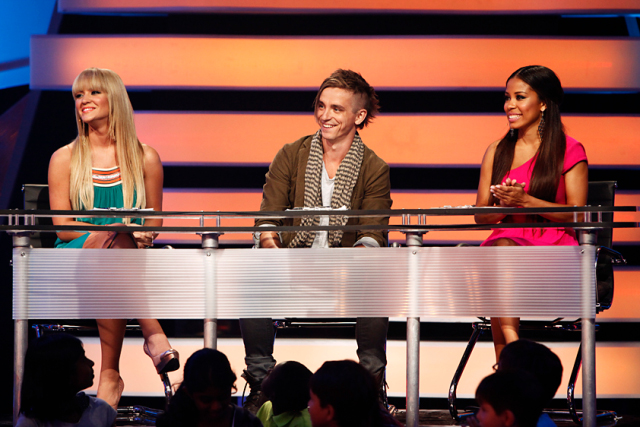 Felix: How’s the dynamic on set? Do you tend to agree with the other judges? Any funny stories or tidbits you care to divulge to us?

Keshia: I love Tara & Mark! Off set we are friends and I think that’s special. We all definitely know what the “IT” factor is. We don’t always agree though & sometimes we argue over it. Ha! Mark comes from the label side of things & can see how a talent can be marketed. I’m all about the voice and its potential & feel very strongly about that superseding image. Tara is all about stage presence & capturing an audience & has a special love for Country music. There are a ton of funny stories & I think the show does a great job showing the crazy that goes on behind the scenes!

Felix: You signed to a record label at the young age of 13, and by 2004 you started receiving numerous awards, even winning a Juno in 2005. How did you define your individualism and personality? How did this reflect in your music, style and genre?

Keshia: When I came onto the music scene, there weren’t many young singers – especially in the R&B lane. I was inspired by the late Aaliyah, TLC, and Destiny’s Child. I wanted to make cool R&B music that was relatable to young kids but also their parents could connect with, just like my idols did being child stars. I just kept it real and I feel that resonated.

Felix: If you could collaborate on an album with any singer, or band. Who would you like to work with and why?

Keshia: I would love to work with Kanye West as a producer. Coldplay would be fun also!

Felix: When you finally get a chance to breath and have some free time. Are you a home body, or do you like to get out? What do you do to let loose?

Keshia: Homebody definitely. I like to stay home & work though! With my free time, I go to a lot of my boyfriend’s hockey games as I live in Chicago now & I like to go to classes for different new things.

Felix: You have worked closely with Alicia Keys to throw a fundraising concert to help build awareness about AIDS with the Stephen Lewis Foundation. Is this something you still feel passionately about and continue to be involved in? What made you get involved in the beginning?

Keshia: I’m Youth Ambassador for CANFAR & I really enjoy that role. I feel when you get; it’s your responsibility to this world to give. That’s what really hits home for me. If everyone in this world were passionate about compassion for others, we wouldn’t have the problems we have in the world. I just want to do what I can.

Felix: You have done some acting, which didn’t surprise me being an attractive and talented woman. The word on the street is there are talks about a biopic movie starring you, based on the late Aaliyah. Care to comment? Any upcoming projects?

Keshia: With being a performer, having to express your inner most feelings & acting just seem to go hand in hand. The Aaliyah project is on hold but it’s something I would love to get into.

Felix: Last but not least, do you have any advice for aspiring singers and musicians?

Practice makes perfect. Sing everywhere & anywhere. Push your school to do coffee house or talent shows, or a community area to host one. Sing for family & friends & film it, and put it on the internet. Practice covers & explore how you can make other songs your own. Just explore and figure yourself out.

Okay Vancouver, do you have what it takes to be “The Next Star”? If you think you got it, come out to the open auditions this Saturday, May 11th, 2013 at the Vancouver Convention Centre, 1055 Canada Pl, Vancouver, BC, V6C 0C3. Lineup Opens: 6a.m. — arrive by 9a.m for Guaranteed Audition.

Written and interviewed by Felix Kay, a contributor at Vancity Buzz. Stay in touch with Felix on Twitter at @TheFelixKay.