Ruba Nadda is a critically and internationally acclaimed Canadian filmmaker. Known for such films as Cairo Time (starring Patricia Clarkson and Alexander Siddig 2009), Ruba’s films include Sabah (starring Arsinee Khanjian) and 13 shorts (Aadan, Blue Turning Grey Over You, Black September, I Would Suffer Cold Hands for You, Laila, Slut, Damascus nights, The Wind Blows Towards Me Particularly, So Far Gone, Do Nothing, Wet Heat Drifts Through the Afternoon, Interstate Love Story, Lost Woman Story).

Her films have been shown over 500 times in film festivals around the world with over 30 retrospectives of her work. She is currently gearing up to do her next two films, a thriller, October Gale and a science fiction movie, Encounter.

Her latest film, INESCAPABLE, is both a tense mystery and a character drama held together by the universal theme of undying and uncompromising love between a father and a daughter. 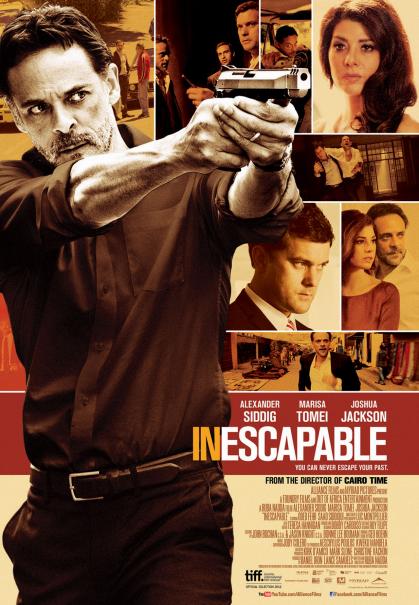 The story revolves around Adib Abdel Kareem (Siddig). Adib is a man who has successfully built a life from scratch – a man who had left his past behind and moved to Toronto, Canada. Then one day he gets a message that his daughter, Muna, (who has been traveling alone) decided to visit her father’s home country (Syria) and disappears in Damascus. Quickly Adib sees his past catching up to him all at once.

Twenty-five years ago, Adib was a promising young officer in the Syrian military police, but suddenly left Damascus under suspicious circumstances. He left his entire life behind, including the love of his life, Fatima (Tomei). He made his way to Canada and wiped the slate clean. He never told anyone about his past. So when his daughter Muna, a young freelance photographer, decided to visit Damascus on a whim, she had no idea what she was walking into.

As soon as he learns of her disappearance, Adib knows he is the only one who can get her out. He returns to retrace Muna’s steps through Syria – a closed and paranoid police state. He enlists the help of Fatima and then Paul, a Canadian Consular official (Jackson) who knows more than he lets on, but in order to find his daughter, Adib must confront the past that he left behind.

I had the privilege of attending the premier this past Friday, and had a chance to speak with Ruba Nadda to discuss more about her new film, INESCAPABLE;

Felix: How did you come up with the concept of this movie? Was it based on real experiences?

Ruba: I’ve been writing it for the last six years. The idea came from three different points in my life. The first point was from my Dad. I’m Syrian, I was born in Canada, and my dad is an Arab man, so at a very young age I was really tired of the misconceptions of Arab men, and wanted to do something different, with an Arab man. So six or seven years ago I was travelling from my first movie in the Middle East by myself, and my dad wasn’t happy about it (even though I was old enough to travel alone), I called back home and was like “hey Dad, everything is fine, I’m calling to let you know I’m still alive”, and my dad said to me, “Don’t go missing, don’t make me come after you”, and I thought – that was a really good idea Dad. That’s when I decided, how best to show an Arab man in the universal manner then to present him as a father that would go to the end of the earth for his daughter. So I just took that route basically and threw a lot of obstacles his way.

Felix: What inspired you to direct this film?

Ruba: Well I write and I direct my own stuff. My last movie I did was called Cairo times with Patricia Clarkson and Alexander Siddig, and so for me my formula is really simple. It’s just an ordinary person caught in an extraordinary situation and I just run with it —  like what would I do in their position, and that’s how I kind of try to figure it out basically.

Felix: Making this film, is there a message behind it? Is your intent to bring awareness to world on what is going on there?

Ruba Yes, for years I have been trying to convenience everybody to listen to me, and that I wanted to set the story in Syria. However,  a lot of people where like “no one is going to care about Syria, no one is going to believe the reasons why that country is so dangerous”, and of course in the last year and a half when the Arab spring irrupted, then everyone said, “hey your timing is pretty impeccable”. Unfortunately there was no way I could keep up with the changing political events, so I decided I had to basically situate the story well before the Arab spring, and then try to provide some kind of understanding context for what is happening there. I’m Syrian and I knew the president wasn’t going to fall that easily, but I just couldn’t keep up with the changing events on a daily basis.

Felix: Is it hard to break into a business where it’s mostly dominated by men?

Ruba, Yes, for sure! I think women tend to be hammered a lot more than men, but the problem is there is nothing I can do about it. I am what I am and I have always had that approach of, what can I do. Part of the reason I feel that way is because I am very lucky to be born in Canada. My parents could have easily stayed in Syria, so I feel I have no business of complaining. It does suck being women in this industry, but there is not much I can do. I just have to keep my eye on the ball and keep making movies and try for the best.

Felix: Did you film in Syria? Was it difficult with all the politics that is going on there?

Ruba. Hell no! No! I have a Syrian passport; but it would have turned into a documentary — like please save me. There is no way I’m going back. First of all, there is no way you can get rights for access to shoot a movie. Second of all, we tried to scout in Jordan and turkey, but it was so dangerous. It was right at the start of the Arab spring, so there was no way I could get insurance. My producer suggested we go to Johannesburg, South Africa, and I did. I was kind of shocked on how the geography was so similar, so I just cheated the whole thing. When you see the movie, the big wide shots are bought footage of Damascus from National Geographic, and then I basically rented a massive moving truck and had someone in Damascus go crazy shopping and we shipped everything over, beds chairs, jeans, water bottles, plants, you name it… I went crazy. I didn’t want to compromise it because my vision was to shoot wide screen and keep that vintage look because Syria is set in time. It’s very communist, it’s very 70’s feel. So I wanted to shoot on anamorphic and give it that vintage Spielberg look basically.

Felix: Going forward, what kind of films would you like to take on? Anyone that you would like to work with that you have not?

Ruba. I really look forward to working with Patricia Clarkson again; I would love to work with Meryl Streep. I think the secret is that you have to just be really passionate and desperate wanting to make the stories you want to tell, and you just have to put your head down and go for it because you get a lot of people from the sidelines saying “you suck, you suck”. The thing I am really thankful about is Cairo time and Inescapable is that audiences loved both movies, so it makes me want to keep going forward, even though I sometimes have to go through hoops to get some projects off the ground.

Felix: I read that you are interested in doing a Science fiction movie, do you have anything you want to say about that?

Ruba: I have a science fiction movie set in Syria; I am literally like 50 pages into writing it. I’m a huge fan of science fictions movies, but we’ll see what happens. I’m excited.