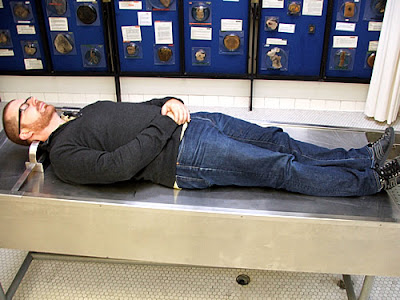 Justin
Mathieson left me by myself to take photos of the remains and murder weapons. I saw the indent made by an axe on a child’s skull. As I bent on my knee to snap a close-up, I heard a raspy mouth-breather behind me. I turned around, and no one was there.
Where was I? Excited to find a haunted spot for Halloween, I contacted the Police Museum just near Main Street to get a tour of old Vancouver Morgue and Coroner’s Court. Originally built in 1932, the facility that the Police Museum occupies was the site of the city’s autopsies and homicide trials from 1932 to 1980. It had the capacity to hold up to 18 corpses at any one time, and if you tour the facility today you will find the original equipment and “lockers” used by the coroner. Murder weapons from early Vancouver homicides are also on display. 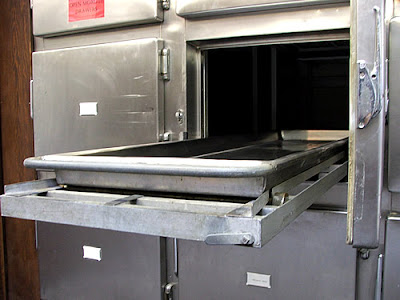 Chris Mathieson, Executive Director, gave me a tour of the Police Museum and entertained me with some of its stories. In the past, two psychics have been invited to the museum. When both psychics “channeled” into the spirits residing there, they went fleeing after being overwhelmed with energy. Mathieson even gave a demonstration of the autopsy techniques as he got on top of the examination table and played dead. 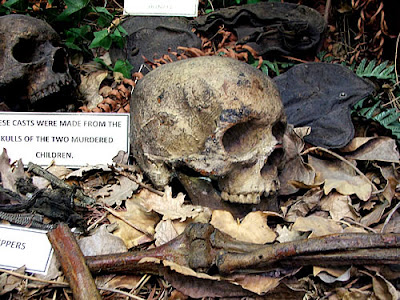 Excited to visit the Museum for Halloween? Every Monday and Tuesday during the month of October, doors open promptly at 6:30PM for an after-hours, 90-minute presentation about the 1,100 cases that have passed through the Coroner’s Court while in operation. Funny, grim, and interesting excerpts from Coroner Glen McDonald’s memoirs will be shared, and Mathieson tells me that the content will be suitable for adults only (18+).

Get tickets and learn more at http://vancouverpolicemuseum.ca/Halloween.htm

I personally found the museum very interesting, but be careful when you’re left in a room…alone.