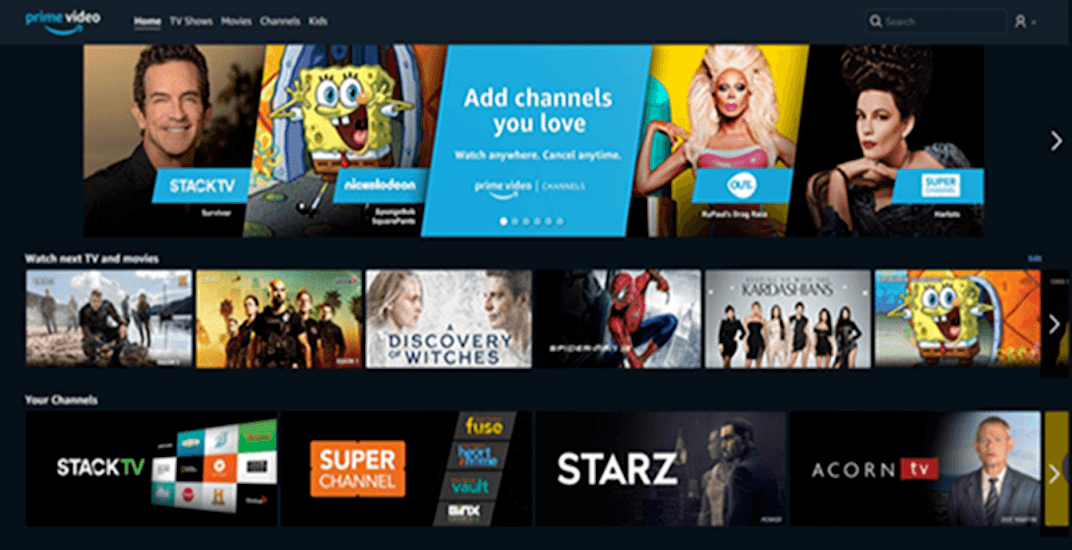 Amazon has teamed up Corus Entertainment to improve how Canadians use their Prime memberships with the launch of Prime Video Channels for Canada.

And starting Tuesday, for the first time, Canadian users are able to enjoy the welcomed addition of being able to add their favourite TV stations and streaming channels to their Prime Video accounts for a low monthly subscription fee, without having to worry about entering a lengthy contract.

Not to mention everything will be conveniently housed in a single account, with one login, and user experience.

Now, Canadian Prime Video subscribers have the option to purchase from a selection of channels of live and on-demand programming, ranging from hayu, STARZ, Nickelodeon as well as STACKTV, a multi-channel package from Corus Entertainment that will feature the latest episodes of hit shows from 12 popular networks.

“By simplifying our customers’ entertainment experience all within the Prime Video app, we can make it even easier to select, subscribe and enjoy TV shows and movies from our channel providers, like STARZ, hayu, and Nickelodeon,” said Greg Hart, Vice President of Amazon Prime Video.

“Prime Video Channels also allows us to team up with Canadian content producers and broadcasters like Corus Entertainment to build unique products like STACKTV for our Canadian Prime members,” said Hart.

For $12.99 per month, users can bundle on StackTV, an impressive selection of TV channels that’s almost like a mini cable package in itself.

This monthly fee will give users access to live and on-demand programs from a variety of networks, including hit series Top Chef Canada from Food Network Canada, home improvement programming like Property Brothers from HGTV Canada, compelling series like Vikings from HISTORY, kids programming like Max & Ruby from Treehouse, and fan-favourite hits like Big Brother Canada from Global.

Members can also stream popular series like The Act, a STARZ exclusive in Canada, reality TV shows like Keeping Up With the Kardashians on hayu, and RuPaul’s Drag Race on OUTtv.