If you’re a Vancouver Canucks fan with a Twitter account, you’ve likely heard of the infamous @strombone1, the handle allegedly used by none other than Canucks goalie Roberto Luongo.

The account has provided some humorous content to followers and the fact that it could possibly be the Olympic gold winning goalie tweeting makes it that much funnier. While it’s never been 100% verified that it is indeed Luongo writing, there has been much research that points to him being the culprit, including the fact the account is followed by a number of Canucks including David Booth, Kevin Bieksa and Ryan Kesler.

This gives one of the account’s tweets yesterday some pretty big significance. There’s been a lot of rumblings about a possible trade involving Luongo being nearly done and as if to stoke the fires, this came up on his (alleged) Twitter feed: 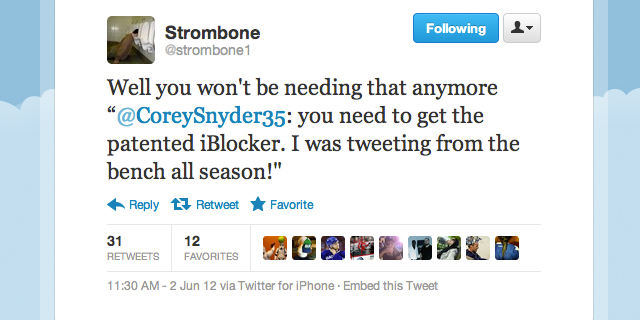 If you’re still confused, the tweet is an obvious allusion to the fact Schneider won’t be on the bench too often next season. Though this may be because Schneider is with a team other than the Canucks, you have to consider the possibility that this is Luongo himself, admitting he won’t be in Vancouver come September.

This tweet is yet another clue in the ongoing Luongo saga here in Vancouver, and though this whole Twitter deal with Luongo could be a sham, where there’s smoke, there’s fire, and there appears to be a lot of smoke surrounding this story.