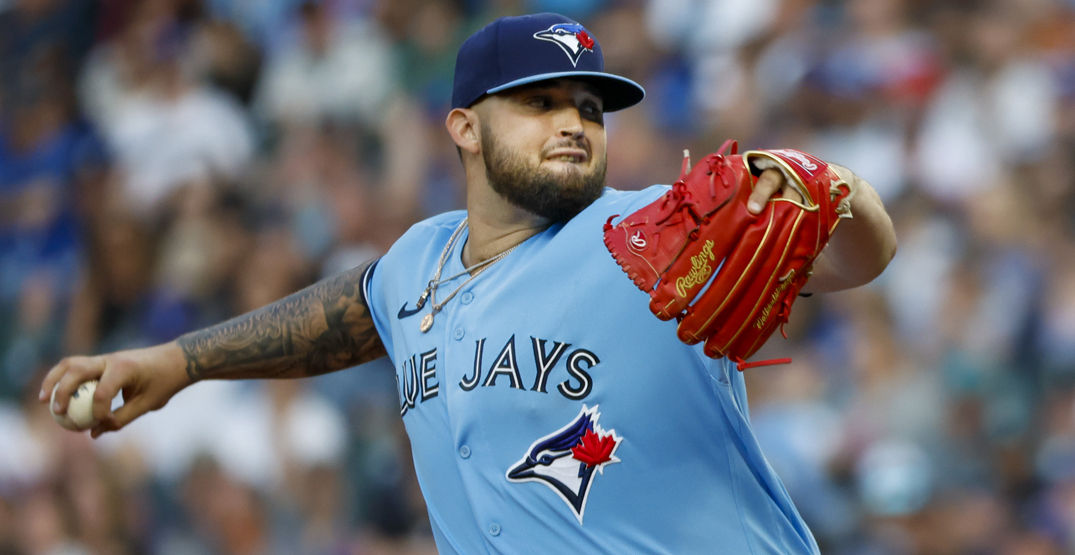 A little over three years ago, Alek Manoah gathered with dozens of family, friends and teammates waiting to hear the words that would change his life: “With the eleventh selection of the 2019 MLB draft, the Toronto Blue Jays select Alek Manoah.”

When the 24-year-old steps onto the field at Dodger Stadium on Tuesday, it will be as an All-Star.

In his first full season in the big leagues, Manoah is putting up eye-popping numbers as one of the best starters in the American League. One person who always believed he’d get here? His mother, Susie Lluch.

As a mom to two baseball kids, Alek and older brother Erik, she knows the trails and tribulations of helping her children live out their dreams. For Alek, one of those dreams has already come true; making it to the midsummer classic.

“This is everything he’s worked for and dreamt of as a kid,” Lluch told Daily Hive. “I’ve dreamt this for him. He deserves it. He’s worked really hard since the pandemic to get to this rise, and in my opinion, he definitely deserves to be there.”

Alek called his mother after learning about his All-Star game nod. The two shared a tearful call as Alek found a quiet place in the stands at T-Mobile Park to break the news with his biggest cheerleader.

“I basically cried with him,” Lluch said. “We had our moment. We’re a bunch of big babies, but we had our moment, and I congratulated him, and told him he’s always an All-Star in my book, but I’m biased.”

Although this is his second season in the Major Leagues, it’s the first year where Manoah broke camp with the team. And with 38 starts under his belt, he’s already posted Cy Young-calibre numbers.

Alek Manoah has the equivalent of a full season in the majors under his belt, and the results have been Cy Young award worthy.

Last season, Manoah received Rookie of the Year votes for his impressive 20 start sample size, but this year he’s on track to earn some Cy Young award votes.

It’s been a meteoric rise for the right-hander over the last few years. Manoah was a catcher and first baseman in high school, and didn’t start pitching full time until his first season of college ball at West Virginia with the Mountaineers.

The rest was history. Two years later, the Blue Jays drafted him eleventh overall in the 2019 entry draft. Then, less than two years after that milestone, Manoah made his MLB debut on May 27, 2021 at Yankee Stadium.

Not only were Blue Jays fans treated to watching the team’s brand new big man working on the mound, fans also took a glimpse into the passion resonating from the entire Manoah family.

“That was the biggest moment of our lives,” Lluch said. Manoah’s mother said she hung on for dear life through every pitch of Alek’s debut, but things got easier once he followed up walking D.J. LeMahieu by striking out Rougned Odor for his very first big league strikeout.

“I still laugh at the broadcasters that said I needed to catch my breath because I still cheer him on like that every inning, every game. I have pretty good stamina; that’s probably why I have a deep voice.”

Pitching in one of the most intimidating ballparks as a visitor, Manoah seemed unfazed in his debut, tossing six innings of scoreless ball against the Yankees, striking out seven hitters along the way.

Next to Alek, Susie also gained a following shortly after the broadcast as Sportsnet’s TV cameras caught her emotional reactions to her son’s MLB debut baseball game. Any proud parent can surely relate to witnessing their child perform for an audience, albeit this milestone was televised for the world to see.

“I was like: Oh my God, I was a big old baby,” Lluch said. “I think it’s an expected reaction. It’s not every day a mother gets to see their child that successful and reach their dream. To me, that was the moment of pure satisfaction, being able to see one of my own doing something that we’ve loved as a family for so long, and watching him love it more than us.”

From very early on, Lluch said her sons were adamant that baseball is all they wanted to do, although Alek had aspirations at West Virginia to be a broadcaster. He’s still a few credits short of his bachelor’s degree in broadcasting, which Alek promised his mom he’d complete down the road.

He still has aspirations to become an ESPN broadcaster one day, but for now, starting pitching is Alek’s primary focus. At 23-years-old, he’s performing like an ace on a veteran-laden rotation that includes former All-Stars like Kevin Gausman, Jose Berrios and Hyun-Jin Ryu.

It makes perfect sense that Hollywood, the 92nd All-Star Game, is the next big stage for Manoah. He pitched under the bright lights of Yankee Stadium in his debut. Now he’ll get the chance to shine even brighter against the best players in the game.

The Manoah family will have a large contingent when Alek makes his All-Star Game debut on Tuesday. Lluch said it’s been hectic, but admits it’s been non-stop fun coordinating all the family and friends making the trip to Los Angeles for the game.

You may not see the Manoah family as visible on TV as they were during Alek’s MLB debut at Yankee Stadium, but they’ll be loud and proud. It’s been a thrilling ride for their family so far, and Lluch hopes the All-Star Game is yet another milestone in her Alek’s legacy.

“What I would like for him is to be healthy, consistent, stay humble, continue on the path that he’s on, and be that model for somebody in the future. And as long as he’s happy, I’m happy.”