In celebration of their 75th anniversary, Air New Zealand announced an exciting partnership with Flight Centre Canada last week to offer 75 round-trip tickets between Vancouver and Auckland for only $475, but if you were hoping to snag a spot in line, it might be too late.

Early Tuesday morning, there were already over 20 mostly young people camping outside the Howe St. Flight Centre location, with many arriving as early as Saturday morning, five days before the tickets go on sale at 9 a.m. on Wednesday, June 17.

“It’s a great deal. It’s worth it,” said one potential customer near the front of the line. They had been there since early Monday morning.

The first travelers arrived on Saturday, and if they can make it another sleepless night on noisy Howe St., they will be guaranteed a trip to New Zealand for $475 including all taxes and fees.

The fare deal was announced on Wednesday, June 10 and the word spread like rapid fire among those hoping to check off New Zealand from their travel bucketlist. Unfortunately there are only 75 round-trip tickets on hand at a first-come, first-serve basis.

On June 17, potential customers can line up at the Flight Centre Ultra Shop at 625 Howe St. with the hopes of being one of the first 75 people in line. Doors will open at 9 a.m., but it is recommended to arrive much earlier.

If you were hoping for your pick of dates, the promotion only includes three round-trip date options for a 13-day trip, with 25 tickets available for each departure.

Normal airfare for those dates is currently $1,642. 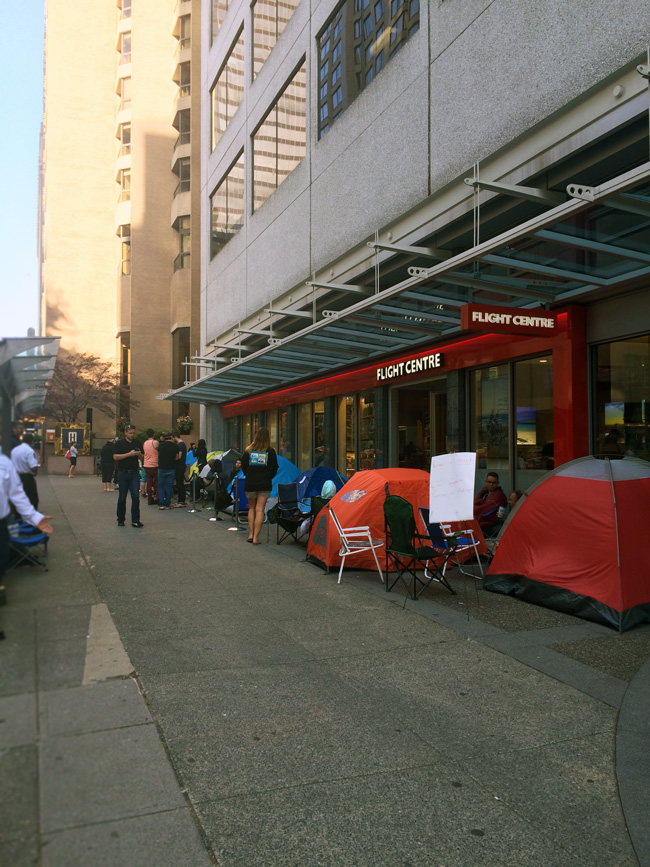