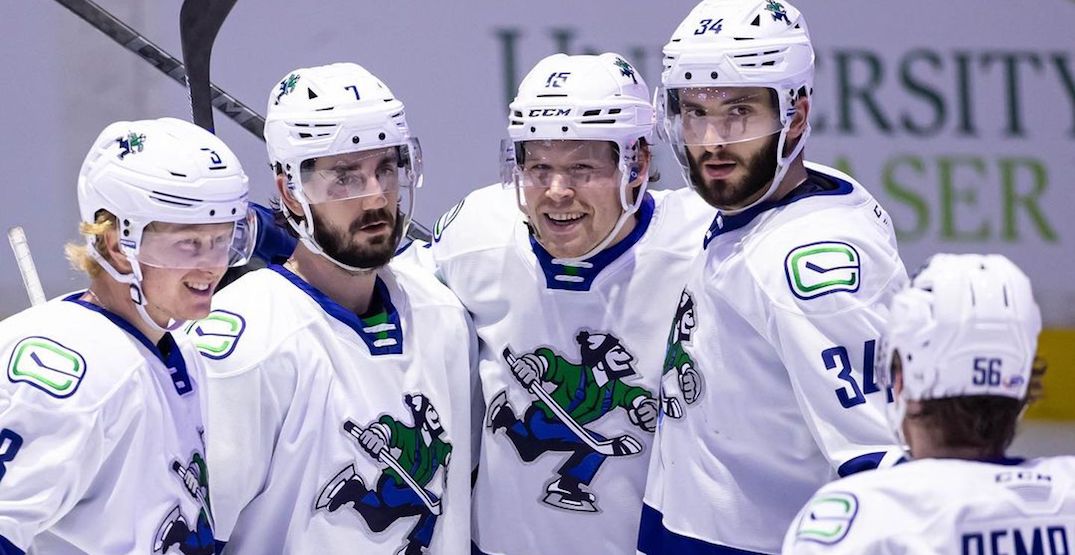 On Sunday against St. Louis, the Vancouver Canucks will arrive at the midway mark of their 2021-22 National Hockey League schedule

Due to COVID postponements, it’s taken a little longer than expected to reach game 41 of the season. But there it is, in front of the Canucks, once they get through tomorrow night’s match-up with the Florida Panthers.

And while they’re not quite officially at the halfway mark yet, for the purposes of this exercise, let’s all agree they’re midway through the season.

And with that as the backdrop, let me point out that the Canucks have had one of their own drafted players called up from the American Hockey League and put on a ‘big league’ Canucks uniform this season.

It was Guillaume Brisebois, as a desperation COVID call-up just before Christmas and he played 4:13 before getting hurt in his one and only NHL game this season.

So to summarize, halfway through the season, the Canucks have had one of their own drafted players recalled from the minor league team an hour down the highway, and he’s provided 4:13 of playing time in the National Hockey League this season.

And for those of you screaming the name of Jack Rathbone, let’s be clear. Rathbone started the season in the NHL and was sent down. He has yet to come back the other way and so this isn’t about drafted players that have suited up for the Canucks – there are plenty of those.

This is to point out that the same issues of drafting and developing that have plagued this organization for years, continue to do so for this franchise.

In a salary cap era, where every dollar spent matters, not only should NHL teams be expected to draft and develop bottom six forwards and depth defencemen, they simply have to.

And the whole idea behind moving the American League affiliate across the continent was to introduce better synergy between the teams. To have the prospects play under the watchful eye of Canucks management, and when the time was right, a car service would deliver them to the front door of Rogers Arena rather than having a day full of travel from upstate New York.

And while it shouldn’t be long before Rathbone gets the call he’s looking for, his return to the Vancouver Canucks roster doesn’t make the development story a whole lot better.

Carson Focht has one goal and five points in 18 AHL games. Karel Plasek has zero points
in the five AHL games he’s played, as he’s missed most of the season with injury.

So while Jim Rutherford spends much of his energy these days trying to whittle down his list of general manager candidates and new front office hires, hopefully the state of the farm system isn’t lost on the organization’s new president of hockey operations.

Guys like Jake Guenztel, Bryan Rust, Teddy Blueger, Tom Kuhnhackl, and Scott Wilson were all drafted by the Penguins and all spent time in Wilkes-Barre before making their way to the big leagues to play various roles in helping round out the Penguins’ Stanley Cup rosters under Rutherford.

It’s long past time that the Canucks start producing some of their own to the NHL by way of the American Hockey League. The organization’s dirty little secret isn’t a secret any longer. But it’s certainly a mess that this new regime has to clean up.