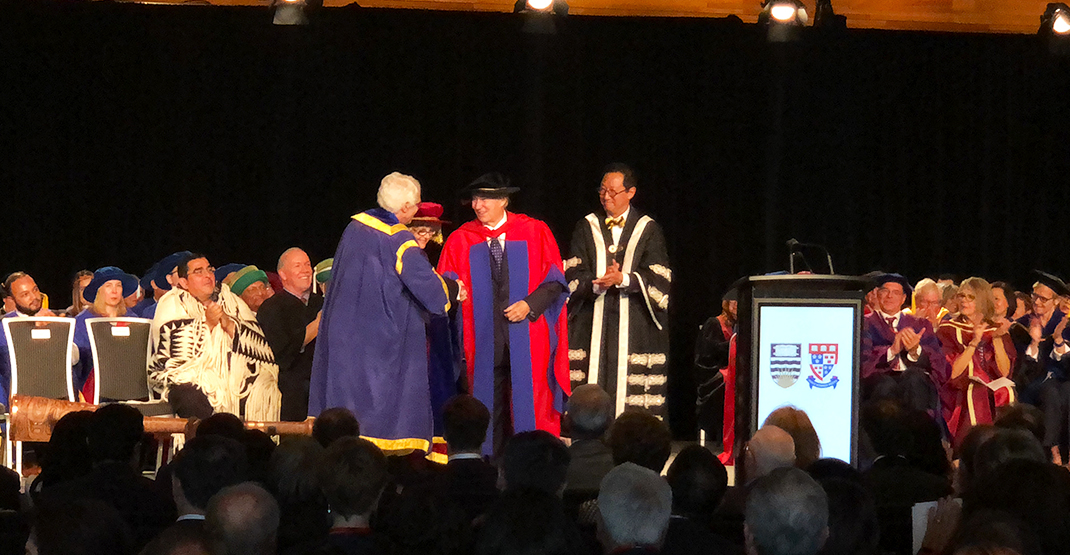 In a special ceremony at the Vancouver Convention Centre today, the region’s largest universities came together for an historic moment.

Both the University of British Columbia and Simon Fraser University bestowed their highest honours on His Highness the Aga Khan, awarding him with honorary doctorate of laws degrees in one joint ceremony.

“It is truly a wonderful day to be able honour His Highness the Aga Khan who so exemplifies the values of our universities in terms of believing in education in the instrument for social betterment,” SFU President Andrew Petter said.

“Specifically, and for the first time in our two institutions history, we are here to confer honorary degrees from both of our universities,” UBC President Santa Ono said. “I can think of no candidate who so deserves this unprecedented joint recognition than His Highness the Aga Khan.” 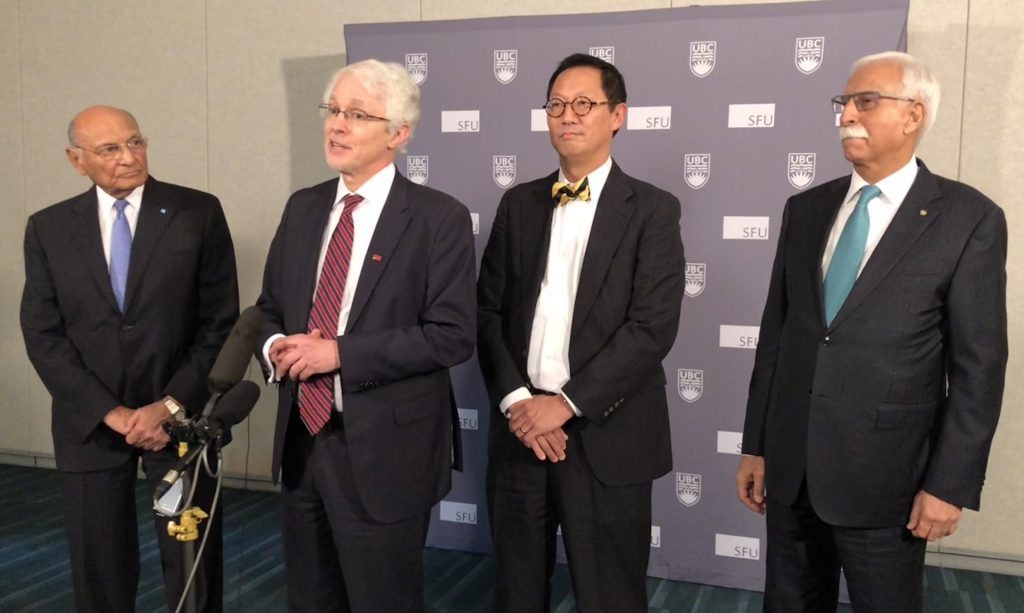 Dr Shamsh Kassim-Lakha (Chairman of the Board of Trustees of the University of Central Asia), Andrew Petter (President of SFU), Santa Ono (President of UBC), and Firoz Rasul (President of Aga Khan University) speaking before the ceremony

It was an unprecedented move, having the two institutions joining together for a conferral ceremony. But it seemed only natural for someone who has spent their life in service to humanity, building bridges and partnerships across all walks of life.

“I think it takes someone of the stature of the Aga Khan to get two universities to actually figure out how to bring their convocations together,” Petter said. “The Aga Khan is well known for his commitment to reconciliation, but to reconcile two convocation ceremonies is really quite an accomplishment. And as much as we are honouring him, he is honouring us.”

The Aga Khan’s work through his global network of development agencies, the Aga Khan Development Network (AKDN), is why so many institutions recognize his contributions to society. It’s what led him to be named an Honorary Canadian Citizen in 2010. 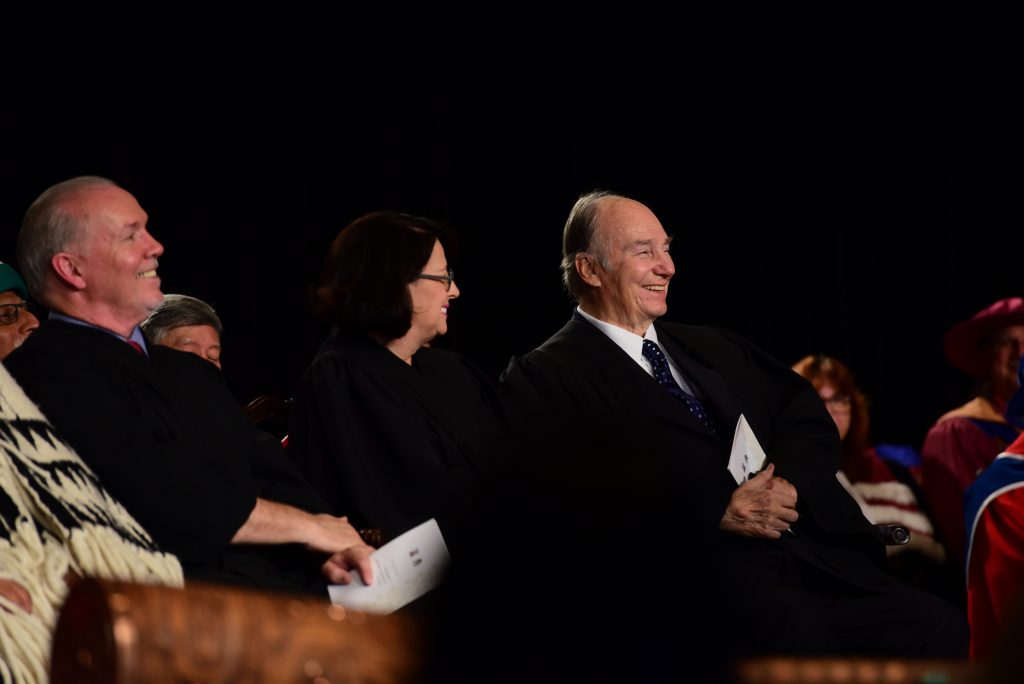 “His Highness shows us how to live well and contribute generously, in a world which is no longer homogeneous or uniform in creed and ancestry,” said BC Lieutenant Governor Janet Austin. “He inspires us to work on behalf of all citizens, to embrace people of diverse cultures, faiths, and belief systems.

“I’m deeply honoured to congratulate His Highness the Aga Khan for the honours bestowed today, and to thank him for his extraordinary leadership, and for helping us to make Canada a place of peace and tolerance that is inclusive of all.”

“It seemed to us that this was a unique opportunity to show our collaborative culture, and honour someone who we believed exemplifies what we as universities are all about,” Petter said. “That doesn’t come along every day, it came along today.”

“It’s what His Highness would have wanted, and it’s fitting that we’re collaborating to honour him,” Ono said.

Being a first of its kind, the two schools also collaborated on the gown the Aga Khan would wear. With SFU’s robes being selected, along with UBC’s hood and cap.

.@SFU with the robes, @ubc with the hood and hat. #agakhan #KnowledgeSociety pic.twitter.com/qtJBUS0zhg

The three conferrals this week add to the list of honorary degrees the Aga Khan has received, including institutions like McGill, McMaster, University of Toronto, University of Alberta, University of Ottawa, Harvard, Brown, and Cambridge.

The 81-year-old Aga Khan is the 49th hereditary spiritual leader, or Imam, of over 15 million Shia Ismaili Muslims worldwide, over 100,000 of which are in Canada. In July 2017, he celebrated his Diamond Jubilee 60th anniversary, which included a year-long global tour, festivities and celebrations, and announcements and launches of new projects.

As part of the Jubilee, he visited Vancouver in May 2018, which included a weekend-long celebration at BC Place. 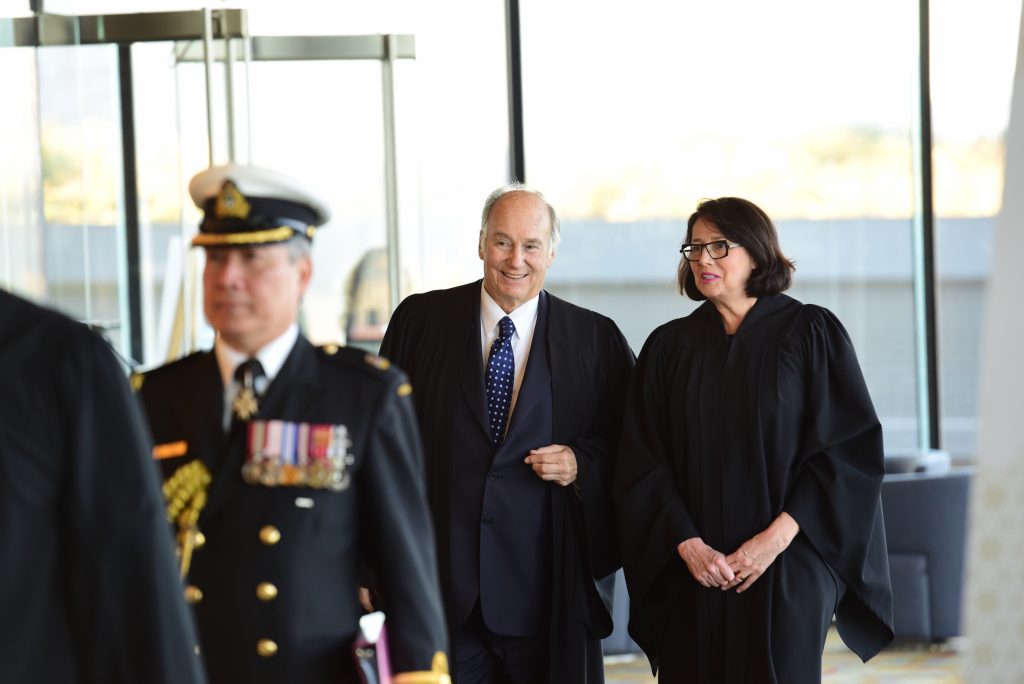 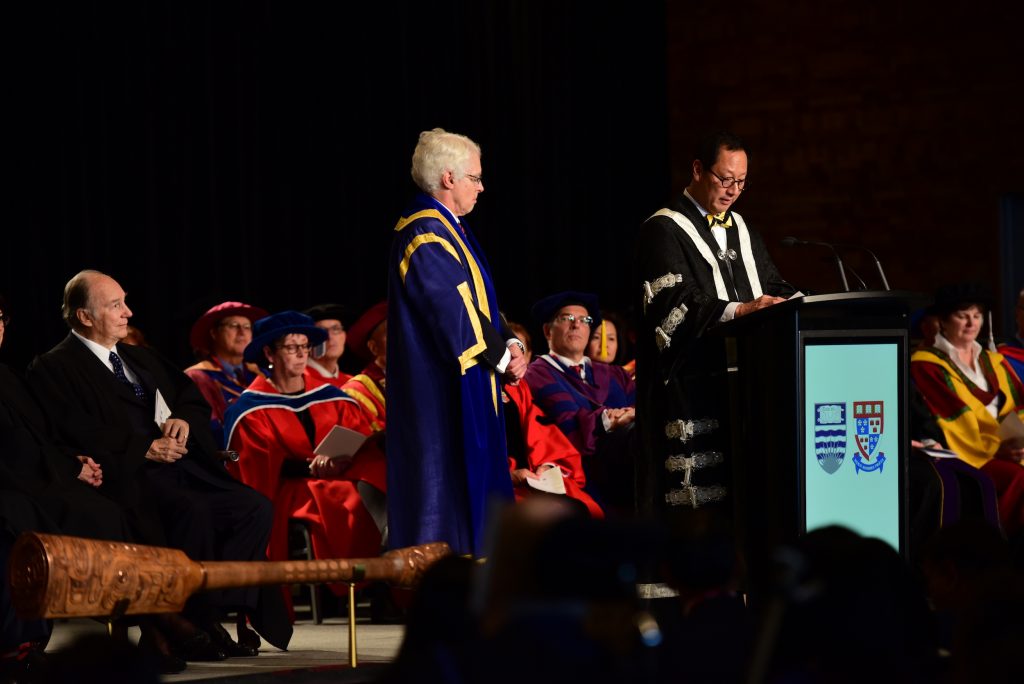 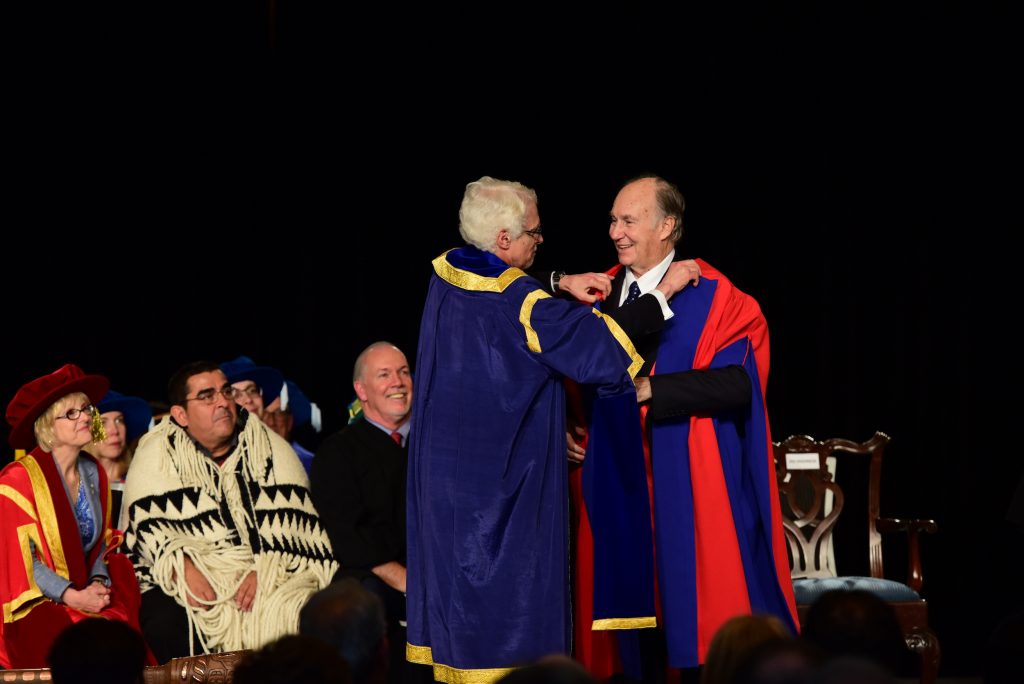 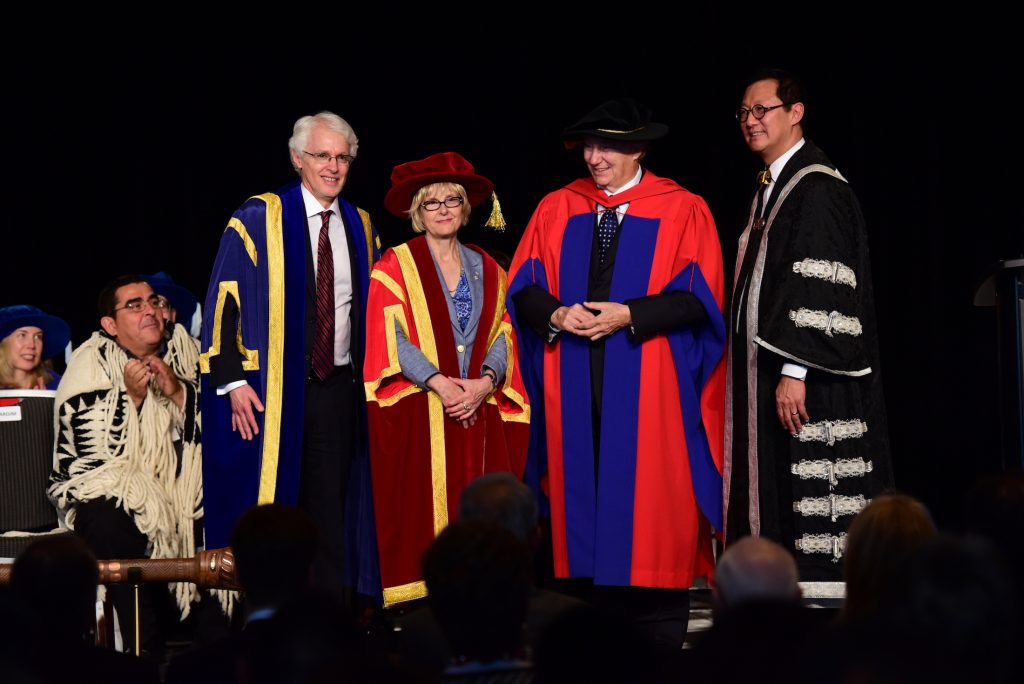 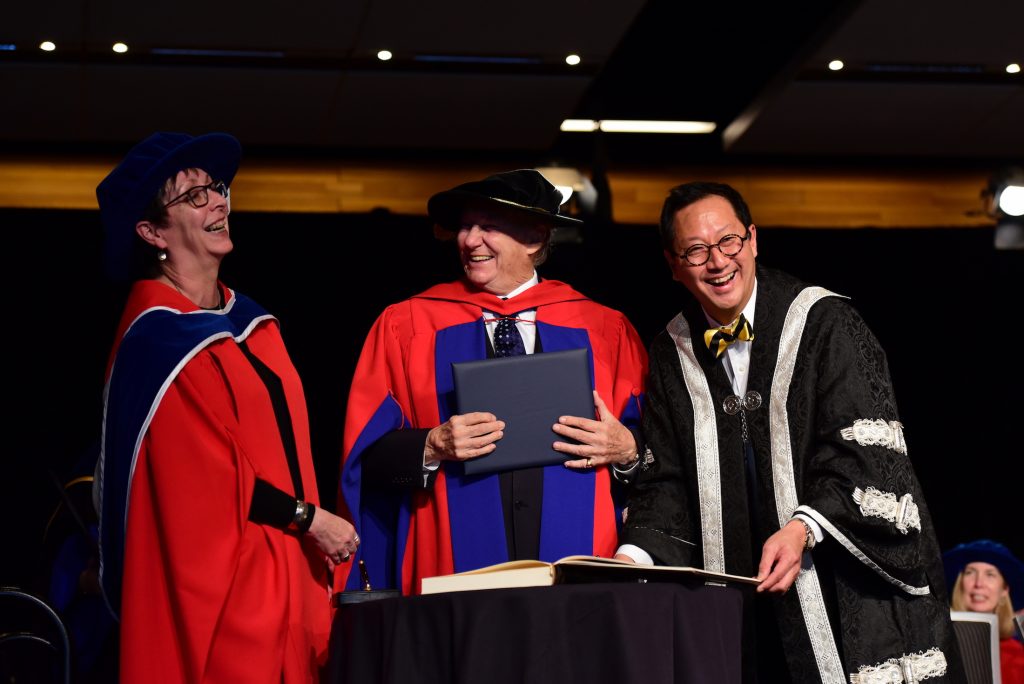