If the honeymoon was over last season for the Trevor Linden management era, then next season might end up in the “staying over at a buddy’s house while they try and ‘figure things out'” phase.

In years past, trading for a defenceman like Erik Gudbranson would have been welcomed with open arms in Vancouver. A big, hulking defenceman who can make life miserable for the opponents, one who sticks up for teammates, can skate, and has potential future captain written all over him? That would have been the stuff of legend in the mid-90s. Gudbranson, wearing a hyper colour t-shirt, a fanny pack, and some slap bracelets, would have been trotted onto the local radio station to breathlessly introduce himself to Vancouver.

“I hear it rains a lot up there, so I’m investing in umbrellas as we speak” he’d say, as the two hosts took turns seeing who could laugh the loudest.

But we live in a different time now. Long gone are the days of being able to use “he’s a proven winner!” or “he’s a beast, a god, a mythical, horn toting, rainbow farting monster!!” to win hockey arguments. In today’s world of statistical analysis, numbers are trotted out left and right to try and showcase a player’s worth.

Today’s flavour of the month is the “blind test”. This is where a grinning statistician asks you to pick between two players that have similar numbers in certain categories. With a weary sigh you make your choice just so they can reveal that the player your team just traded for is in fact slightly worse than than a potato. 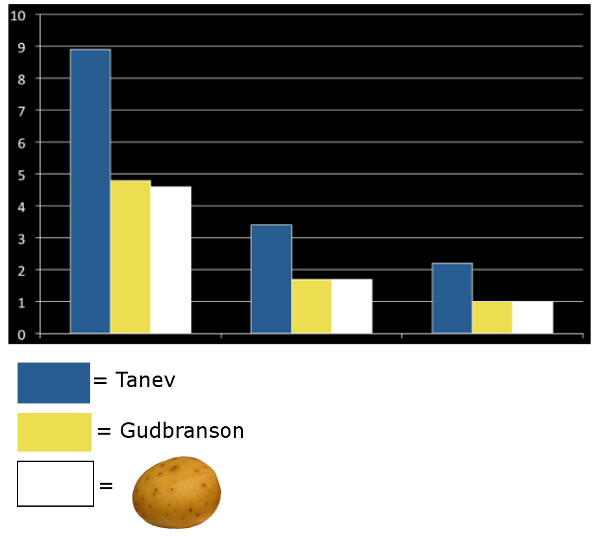 It’s the advanced stats version of “pull my finger”.

Depending on where your views on statistics lie, this is either a good thing or a bad thing, but you cannot deny there is at least something far more scientific about this approach. I appreciate the insight numbers bring to the game, and I love the fact that people are trying to find more concrete reasons for explaining why things happen in hockey. Often times someone will come up with numbers that explain a concept I’ve held in my head about hockey for a long time, and it’s a beautiful thing. “Look at us go! We’re such a good team! We’ve just made sweet hockey love together! Science and gut feelings, we’ve done it again!”

Sometimes someone will come up with numbers that explain that I am in fact and idiot and my favourite player is in fact hot garbage, and I get sad (RIP Shea Weber). I try and balance my belief in the eye test and stats, but I don’t begrudge those who go all in on stats.

In the old days? You’d listen to the radio and hear your beat reporters tell you what’s going on. Maybe Dan Russell would scream at someone and hang up on them for having a different opinion. You’d read some Tony Gallagher piece and either nod or shake your head. Then you’d go to work and argue with your co-workers about it all. That was your time to get your opinions off your chest. You were very limited in where you could scream about hockey. You’d walk by the lunch room multiple times just hoping to run into Andrew from accounting so you could tell him what a pylon Dana Murzyn was.

Today? Twitter, Facebook, Snapchat, whatever platform you use, you have a multitude of options to express your thoughts on hockey.

Some use the advanced stats way (and parlay that into jobs with the Florida Panthers). Some use it to express their eye test ways (using Brent Burns’ beard as a metric). And some even use advanced stats and talk hockey at the same time (some would say this is the ultimate form of expressing ones opinion).

For the Canucks, this is going to come to the forefront when the times get tough (which by all accounts it most likely will for the next several seasons). The Canucks haven’t really faced the brunt of social media during truly dark times.

During the rise of 2011, everyone and their dog had a positive blog about the Canucks because hey, who doesn’t love writing about a winning, dominant team. Even if a team made a misstep here and there, and advanced stats tried to go “Gee, who didn’t see THAT coming”, as is their way, it was swept under the rug of “I can’t hear you with these two Presidents’ Trophies in my ears.” 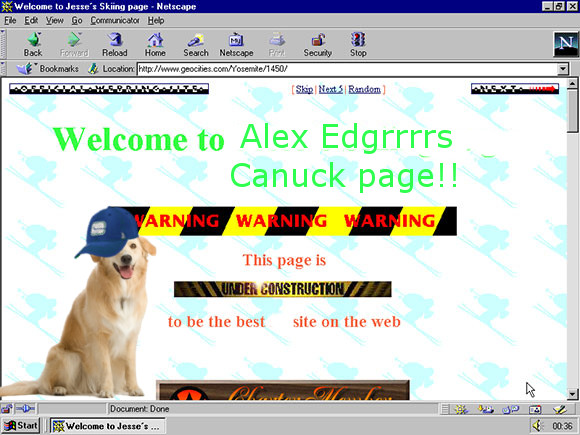 All that cheer from 2011 is long gone now, of course. When a team is losing, that’s when you see the wrath of a Canadian fan base come out in full force. Except now everyone has a megaphone in hand.

What if social media was at its height during the Pavel Bure days? Can you imagine the vitriol there would be over the Canucks stealing him in the draft? The online petitions to “BAN THE CASUCKS!!!” would be numerous and plentiful.

What about during the Keenan era? The Mark Messier signing? Rick Ley? It would have been total anarchy.

For a team like the Canucks, this is a nightmare scenario. There has long been a culture around the team of controlling the message. One has to look no further than the feud between media members like Tony Gallagher, Mike Beamish, Dan Russell, etc. and Canucks management to see this is a team that does not like dissenting (read: negative) opinions. The Canucks Minister of Information would prefer if you would focus on that one goal they scored in the 8-1 loss, thank you very much.

You can see flashes of that controlled approach even in things like the team’s Twitter account. While you’ll see the Dallas Stars scoreboard and Twitter accounts getting rave reviews for their humorous and loose approach to social media, you see a much stiffer strategy from the Canucks. Self flagellating humour is a rarer sight than a clean Bartkowski zone exit. There are even stories of the Canucks controlling the details down to even what music the in house DJs are allowed to play.

@mtscentre @NHLJets Lets not forget to get some scoreboard chirping/revenge in tonight!! okay?>? @DallasStars pic.twitter.com/Q7ifT5sz3P

Add all of this up and it speaks of a team that very much wants to tell you what to think, or at the very least, ignore the smoke that’s coming out of the kitchen door.

This is what makes advanced stats the Canucks’ current worst enemy. Not only does their team not put as much stock into advanced stats (Benning recently pontificated that his Bruins won the Cup without the use of advanced stats), but it looks like more and more of the league appears to be embracing them. That isn’t to say advanced stats are the be all, end all of hockey, but it does create an optic of “Benning the Dummy”, with his old school approach.

In a perfect world, maybe Benning is the super scout everyone touts him as. Maybe advanced stats’ importance is overstated. Maybe the Canucks turn things around and build a winning team over the next three to five years. There are certainly people out there who feel this can happen. The loud vocal online contingent does not override the fact there are people out there content to see how things play out.

And don’t laugh, because that’s a big difference.

It’s easier to shrug things off when it’s just some angry voice in the corner yelling at you. But when they have numbers and spreadsheets to back them up? That’s a much more powerful weapon, even if it’s just the optics of having the scientific method behind it. This also causes other people to buy into your argument easier because, hey, science.

Now instead of claiming Canucks management is garbage, people will say they’re garbage and point to stats. Stats that make it feel authoritative and definitive. Right or wrong, advanced stats have made the grey area of hockey debating into a seemingly much more black and white arena. Never has hockey felt more like a “right or wrong” situation than today’s NHL.

Now when a GM screws up, there will be detailed formulas explaining why they screwed up, and how. This allows people to get angrier about it because those advanced stats guys, they do predict things correctly many times, despite some old school people wishing they didn’t. 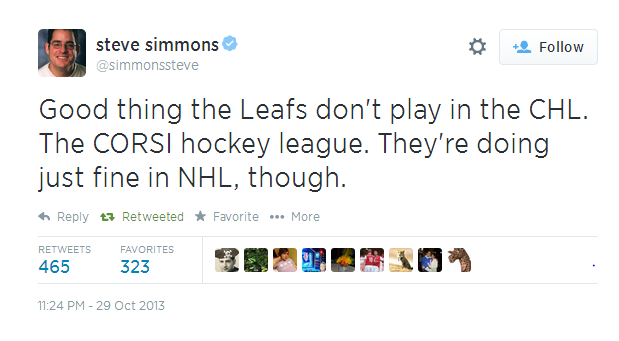 Too bad Phil Kessel doesn’t play in the NHL… The National HOTDOG League. He’s doing just fine in the NHL, though, eh Steve?

If some guy on Twitter called a move stupid a year ago, why didn’t the GM of the team see it coming? That is a damning indictment for some.

Which brings us back to the Gudbranson trade.

On its own, it’s not a move that would normally get a fan base so divided. But when you add in the other Benning moves (Sbisa, Dorsett, Sutter, Shinkaruk), it has created a house of cards for the Canucks. One that the fan base who believes in the predictive nature of stats, fears will come tumbling down in the near future. That is the main source of angst among many of the dissenters.

With so many voices out there, with so many success stories of stats guys being swooped up by NHL teams, the Canucks face an uphill battle if things go south for them. Add in the tightly controlled message from the Canucks (which reads as unaware at best, and arrogant at worst), it is going to be an ugly situation in Canucks Nation for many years.

That isn’t to say Benning doesn’t have his supporters. If we want to have some real talk here (go ahead, pull up a chair), advanced stats people are not the best at being humble. The idea of their numbers being the be all, end all of hockey justice can rub a lot of people the wrong way, and there are most likely many quiet observers who haven’t been angered by Benning’s moves, or at the very least, think stats guys need to calm down a bit.

But there are a lot of upset Canucks fans out there. Even if you take away the “new school” versus “old school”, there are simply a lot of people who just hate losing. It doesn’t matter why the Canucks are losing, they just don’t like it. And now, more than ever, they have a thousand ways to express it.

So hold onto your butts Canucks management, things might get pretty bumpy for a while.