Despite getting very little sleep due to some epic snoring, the day started out very promising. The shower in our volunteer accommodation has good water pressure and lots of hot water, and the breakfast over in the dining tent was filling: porridge, yogurt, butterscotch blinis and ‘freeze-dried coffee’. Not exactly Starbucks, but actually pretty good. 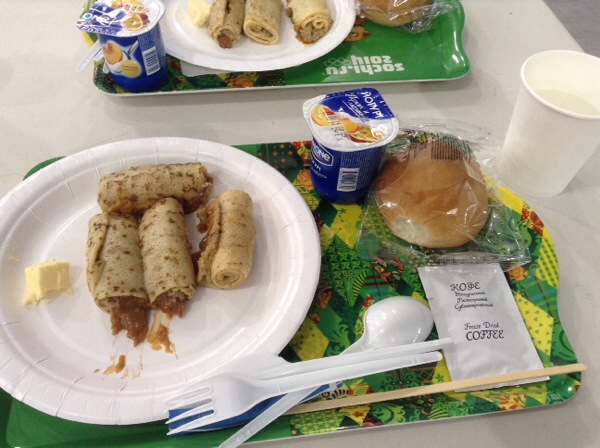 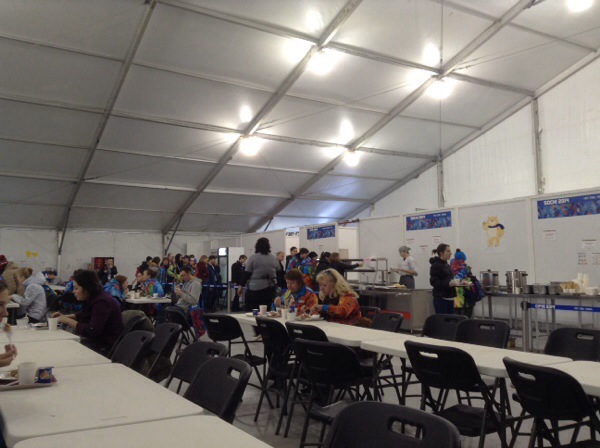 As we were finishing up breakfast, someone came in to the dining tent and announced something in Russian that made everyone else perk up. Turns out, they were going to have a few thousand tickets to the Opening Ceremony for volunteers. A line formed, but you had to write down your accreditation number — and I didn’t have my accreditation yet. We begged and pleaded, but no dice,

So my roommate ‘S’ and I took the workforce bus over to Olympic Park to pick up our accreditation and uniforms. This time, I was in the system and getting the accreditation printed and validated was quick and easy. Uniform distribution was also smooth, except they were out of the extra-small sizes in a few items — I’m going to be swimming in my medium pants, and will have to double up on socks to get the shoes to work. 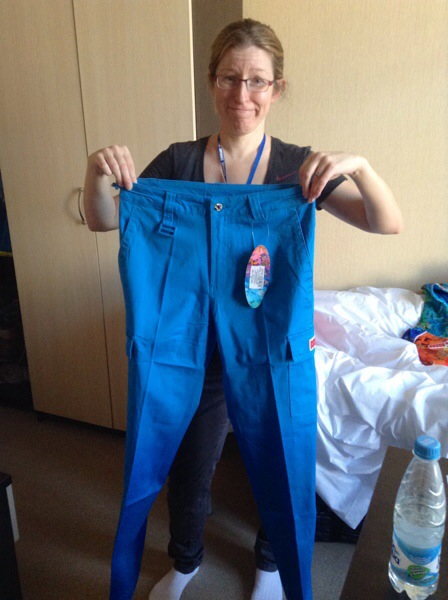 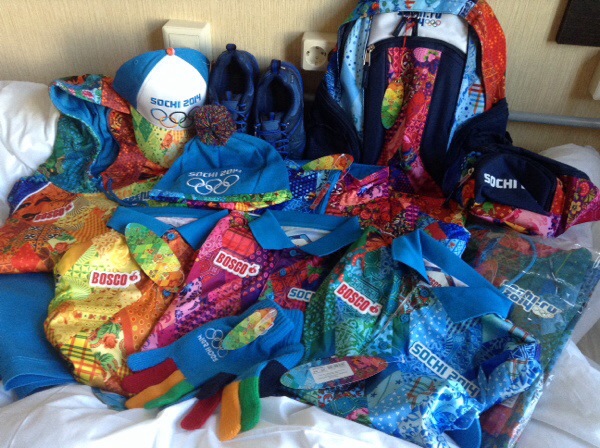 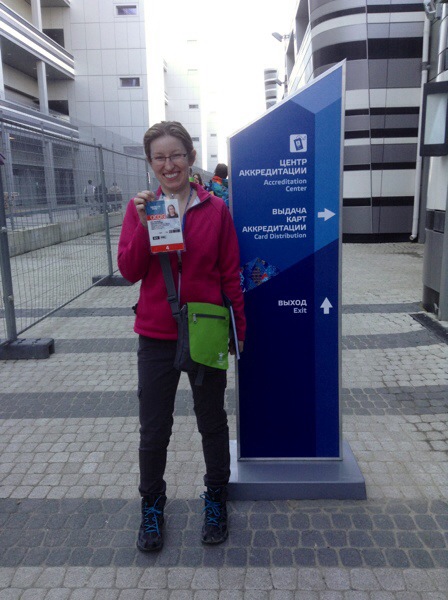 The uniform package is pretty comprehensive: jacket, hoodie pullover, pants, three polo shirts, cap, toque, gloves, rain poncho, backpack, fanny pack, duffel bag and sneakers. Not sure how I’ll be able to get all this stuff back to Canada.

After lugging our uniforms back onto the bus and returning to our accommodation, we popped into the volunteer lounge just on the off chance they were still taking names for the Opening Ceremony — and they were. They wrote down my name, phone number and accreditation number — and said to meet up at 5 p.m. at Shayba Arena. That was the only instruction. 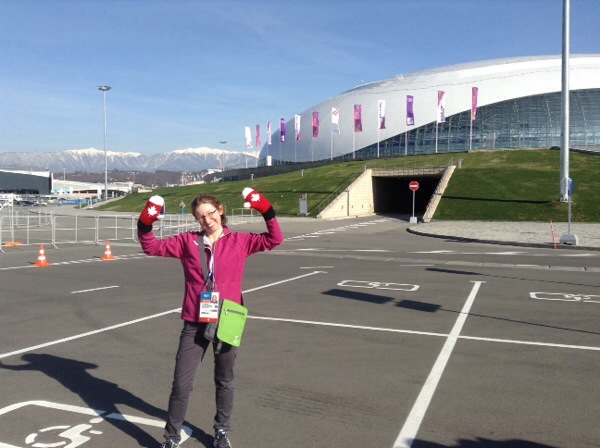 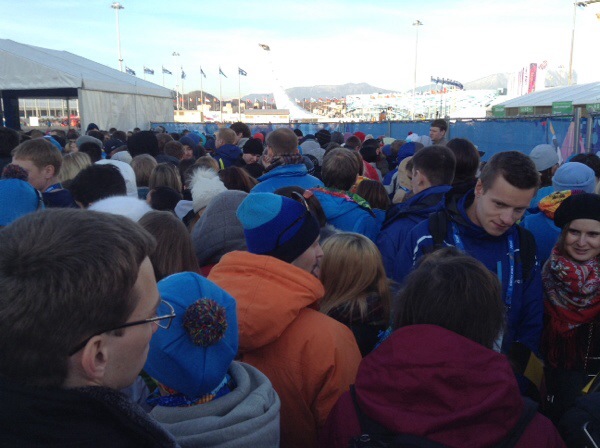 So off we went back to Olympic Park to explore. Except when we went to enter the park, we were turned away. An Olympic Park entry ticket was needed — no one had mentioned that. We walked the circumference of the park, trying to figure out where we needed to go. The workforce staff at Shayba didn’t know anything about the volunteer tickets for the Ceremony, but as more and more volunteers gathered without any clue of what to do next, eventually we were pointed to another area. And then another. And so on. 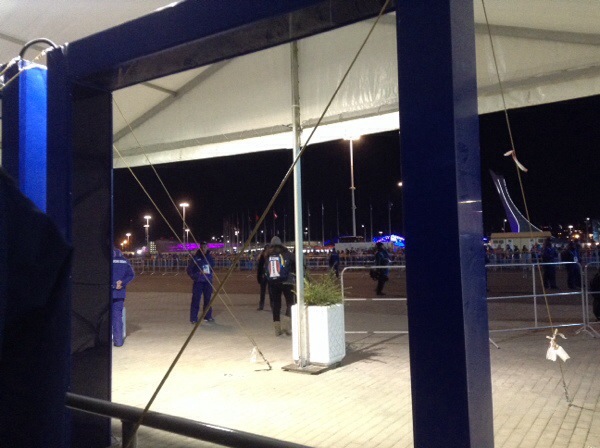 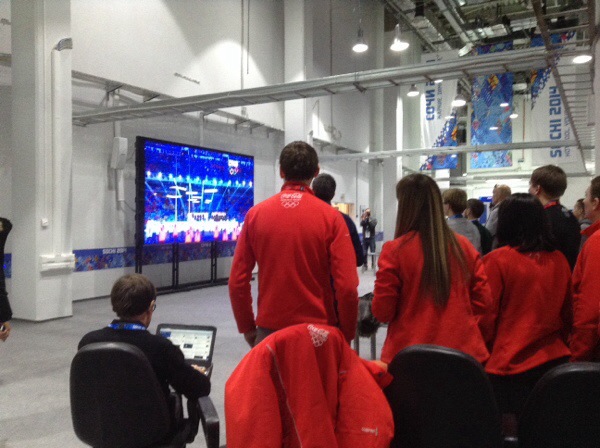 Again, I started to write a detailed explanation of the confusion that followed but who wants to read that? Long story short, after four hours of waiting, we were close to the front of one ‘line’ (actually a jostling sea of humanity) but with no sense of whether we would actually make it in. It was now 8 p.m., almost time for the Ceremony to start, we were freezing and had to make a decision: stay for a small chance of getting in, or bail and find somewhere warm to watch it on TV. We chose the latter, and power-walked to the Main Press Center, just in time to catch the Russian national anthem. 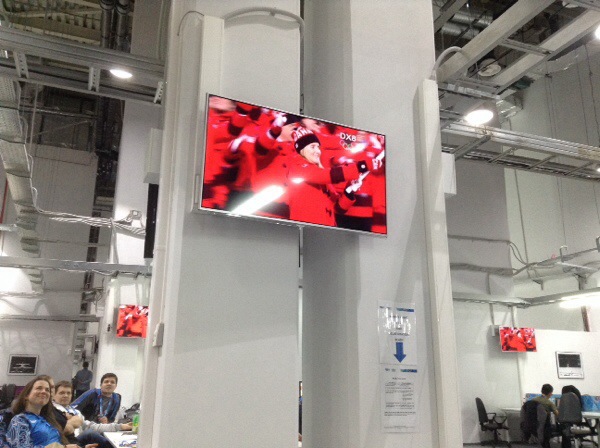 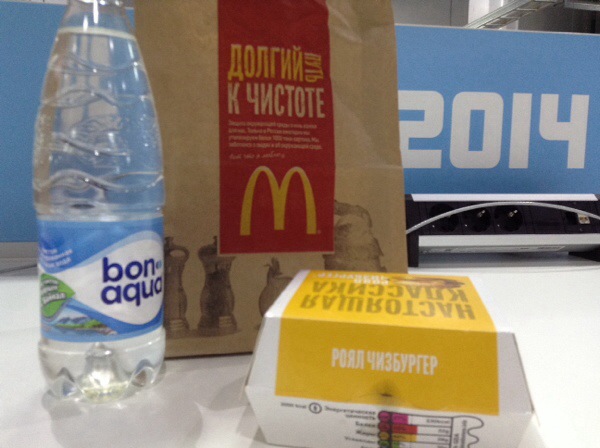 We ended up watching the rest of the Ceremony while drinking espresso and — since I hadn’t actually eaten since breakfast — indulging in some fast food at the McDonalds in the MPC. (That’s a royal cheeseburger, and I hope I’m not the only one who replays the ‘Royale with cheese’ scene from Pulp Fiction in their head)

I normally like watching the clean feed of the broadcast, without the commentary, but this one was pretty confusing without someone explaining what the different parts were meant to represent. I liked certain elements, but will be curious to hear what the television viewers thought compared to the in-arena audience.

Time for bed. Any tips for blocking out the sound of snoring? Earplugs were useless, and I can’t exactly elbow my roommate like I would my husband; it’s going to be a long three weeks if I’m getting no sleep.