Abbotsford’s House of James bookstore and coffee house has partnered with The 5 and 2 Ministries to help collect and distribute water to the city’s low-income families in need.

The 5 and 2 Ministries operates out of a black van in Jubilee Park and gives out as much water that comes in, sometimes more than 100 bottles per day.

Executive director Ward Draper explained that there is a lack of access to drinking water for the homeless living in downtown Abbotsford. Without water, they risk dehydration and/or heat exhaustion. The heat wave this summer has only intensified the need.

One of the issues is the absence of drinking fountains.

“I never noticed our public parks have no drinking fountains until I looked for them,” says House of James’ co-owner Kathy Klassen. “Vancouver has drinking fountains in over 100 locations and adds extra temporary ones during heat waves. Many of us are contacting our mayor and city council to get this changed.”

At the moment, House of James is the only local business collecting water for The 5 and 2 Ministries. When they saw the need, the decision to set aside space to store donated water bottles was easy.

Klassen said she has always had compassion for the poor but never knew what she could do to help. Then she learned about the community outreach and heard they needed help serving meals.

“I thought, I can do that!” says Klassen.

Helping with occasional dinners soon turned into making sandwiches for a Friday-night sandwich patrol to homeless camps. Now she has earned the nickname “The Baker” in the community as her homemade cookies, granola bars, and buns are held in high regard.

“I wanted to serve up nutrition with love baked in,” she says. “I put the love in on purpose. I put it in while I am mixing the ingredients together with hope and prayers for better days for my street friends who I am getting to know by face and name.”

Draper adds that their goal is to create a welcoming and safe environment for people.

“We want the people in our community to know they have value,” he says. “Once they [know they] have value they start making better decisions.”

It can be a long process and requires persistent encouragement, but one thing people can do to help is set up coffee dates and visit with community members.

“You don’t know who is enabled or who needs help until you have a relationship,” says Draper. 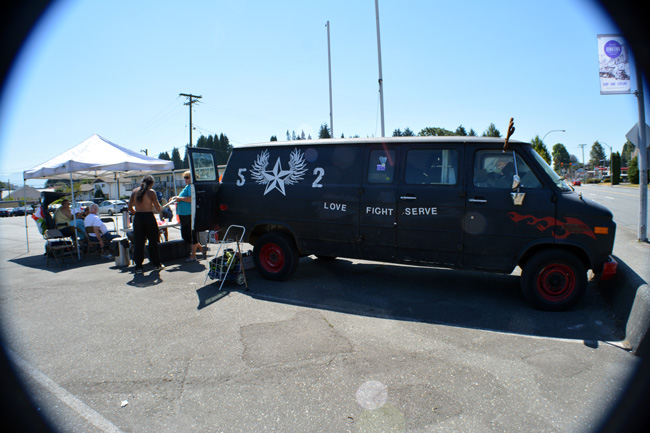 Klassen studied psychology and art in college, but it wasn’t until after 15 years of volunteering with youth and single mothers’ programs that she unlocked a passion for counseling dysfunctional families and addiction.

“A good heart is good raw equipment, but it was knowledge and growing confidence over the years that propelled me to actions,” she says.

Her grandfather was an alcoholic who gave up her father for adoption after his wife died and he couldn’t cope with raising a child. Understanding the context helped her feel empathy for her grandfather.

“I got to help save the lives of two fellows in serious addiction,” she adds. “How does it happen that I, an ordinary woman, would have such an opportunity? I think it’s because my eyes were open and my spirit willing.”

When: Between 9 a.m. and 9 p.m. Monday through Saturday

Cost: Food and money donations are always welcome, as well as visitors willing to build relationships with community members and listen to their stories.