When you hear “gang turf war,” West Abbotsford might not be the first location that comes to mind. For the people who live in the area, however, the violence is real and hits close to home.

Amrit Saggu, a resident of the Townline Hill area, realized that young men in his community were turning to lives of drugs and violence without regard for who may be hurt in the process. This inspired him to write and record a hip-hop song and video called “A Stray.” The message is clear: gang life will not end well and young males should steer clear.

Vancity Buzz spoke with Amrit, who goes by the stage name Saint Soldier.

When asked why it was important for him to write about a topic with such a powerful message instead of a light and easy going subject found in many of today’s hip-hop hits, Saggu said the choice was simple.

“This song was written in an emotional state. It was a reaction to an incident in my neighbourhood; the death of an innocent elderly man who was struck by a stray bullet,” he says.

That man was 74-year-old Ping Shun Ao, who was killed when a stray bullet, intended for someone else, struck him instead. The senseless violence led Saggu to write a song that depicts a young man who is lured into gang life and is led to unfortunate consequences.

“I tried to imagine how the shooter must have been feeling also,” he says. “Nobody could have taken this lightly. I wrote this song simply because I couldn’t remain quiet. I had to make some sort of effort to try and help.”

Although he has grown up in the area and has seen many of his neighbours follow the path to gang life, Saggu has never felt the pressure to turn to drugs and violence.

“I’ve been very fortunate to have had a good circle of friends and parents who taught me well,” says Saggu. “That being said, I’d like to mention to anyone reading this that I hope you can to try to take a compassionate and empathetic perspective on those who have taken the path of gang life. It’s much easier to judge them than it is to try and understand what must have led them to this.” 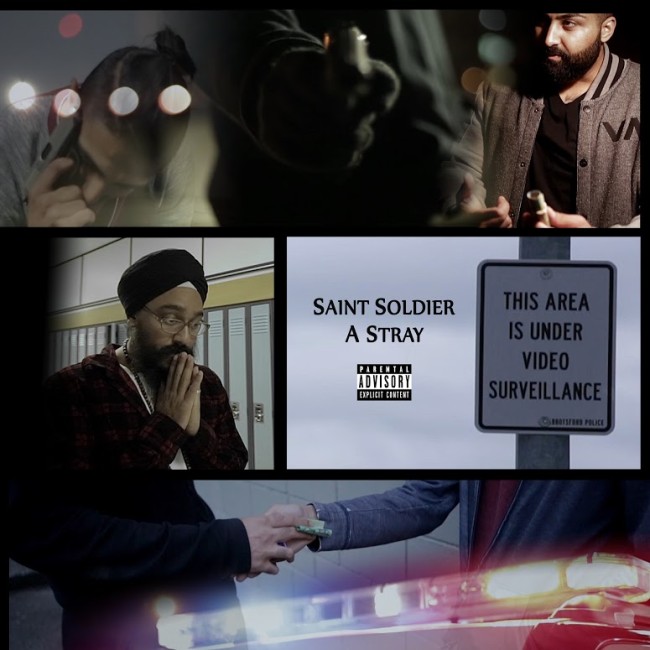 Although he lives close to the violent activity, when asked if he worries about any backlash from releasing the song and video, including the possibility of putting his family in danger, he admits that for a brief moment, he was concerned.

“However, I quickly put that out of my mind. I believe if we are sincere we should be fearless,” he says. “Second, I believe most listeners will feel the compassion in the lyrics and anger will not be the response. In the second verse I say ‘I love you my brother, I spit on this beat for you.'”

The song and video for “A Stray” have generated a lot of buzz in the Lower Mainland, but Saggu believes the next step in putting an end to the violence begins with the parents of youth who may be tempted by the lifestyle.

“I think conversations with parents are necessary,” he says. “We need to educate them and ourselves to understand that life is so much more than the pursuit of wealth and respect.”

Saint Soldier plans to continue his mission of releasing songs with a purpose. His next album, Duality, will be released soon. He is also working on more videos with music producer and fellow Abbotsford resident, DJ Hark.